Ukraine must not be complacent as Putin struggles says expert

Volodymyr Zelensky has vowed that captured Moscow troops will be treated in a “civilised manner” – a better fate than being killed in Vladimir Putin’s “evil” war. The Ukraine president made a direct appeal to the invading forces in offering guarantees in exchange for them laying down their arms. He pledged the circumstances of their surrender will not be disclosed and they will not be forcibly sent back to Russia.

Mr Zelensky spoke after Putin increased the maximum penalty for voluntary surrender or refusing to fight to 10 years in prison.

The Kremlin’s decision to call up 300,000 reservists has been met with protests across that country.

Mr Zelensky said: “Russian commanders do not care about the lives of Russians. They just need to replenish the empty spaces left by the dead, wounded, those who fled or soldiers that were captured.”

The other side to being a prisoner of war in the conflict – in the hands of Putin’s thugs – has been described by a British fighter, who has revealed how Russian captors asked him to choose a “quick or beautiful death”. 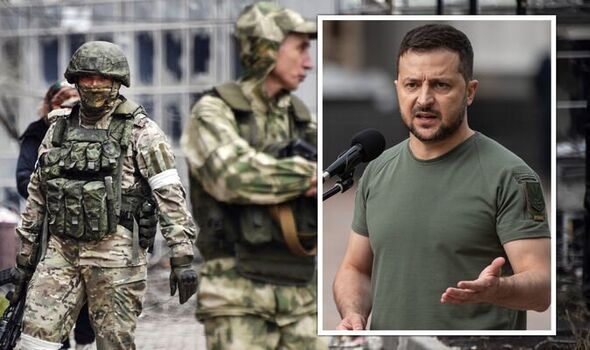 Aiden Aslin, 28, was beaten, stabbed and “treated like a dog” during his five months as a PoW.

Reunited at the weekend with his mother and Ukrainian fiancee Diane Okovyta, Aiden said: “I never thought I would get out alive.”

Shaun Pinner, 48, his friend and fellow British prisoner, described how he was electrocuted, stabbed, endured a mock execution and forced to listen to Abba songs on a loop during his time as a PoW.

The two men and three other Britons were released last week after former Chelsea FC owner Roman Abramovich brokered a prisoner swap with the Russians.

Aiden, of Newark, Notts, had built a new life in Ukraine where he joined the marines and fell in love with Ms Okovyta.

He was take prisoner by the Russians in April following brutal fighting at the siege of the southern city of Mariupol.

Aiden, when asked where he was from and replying “Great Britain”, was punched in the face.

He recalled how he was taken to Donetsk where he was interrogated and brutally beaten after each answer. One of his captors plunged a knife into his back.

Aiden said: “The officer knelt down in front of me and said, ‘I am your death’. He then asked me, ‘Do you want a quick death or a beautiful death?’

Following a show trial in Donetsk, the two Britons and Moroccan Brahim Saadoun were told they faced the death penalty.

Shaun, 48, revealed yesterday how he was tortured, saying: “It was hell on Earth. I never want to hear another Abba song.”

Shaun, from Bedfordshire, has a Ukrainian wife and served in the Royal Anglian Regiment before joining the Ukrainian forces. He was also captured in Mariupol.

He added: “One guard said he was going to kill me and send the video to my mother. We had dark days.We had to cling to hope.”