Women and their supporters are rallying in Washington, DC, and across the United States on Saturday as part of a Women’s March against President Donald Trump’s recent nominee to the Supreme Court, Amy Coney Barrett.

Speaking to a crowd gathered at Freedom Plaza in the US capital, Rachel O’Leary Carmona, the Women’s March executive director, said more than 400 similar protests were organised across the country.

“When we come together, when we take the streets, when we vote, women are the single most powerful political force in America, and there is nothing – not one thing – that Donald Trump can do to stop us,” she said.

The crowd in Washington, DC – most of whom wore masks due to the COVID-19 pandemic – planned to march to the US Capitol and US Supreme Court buildings, local media reported. 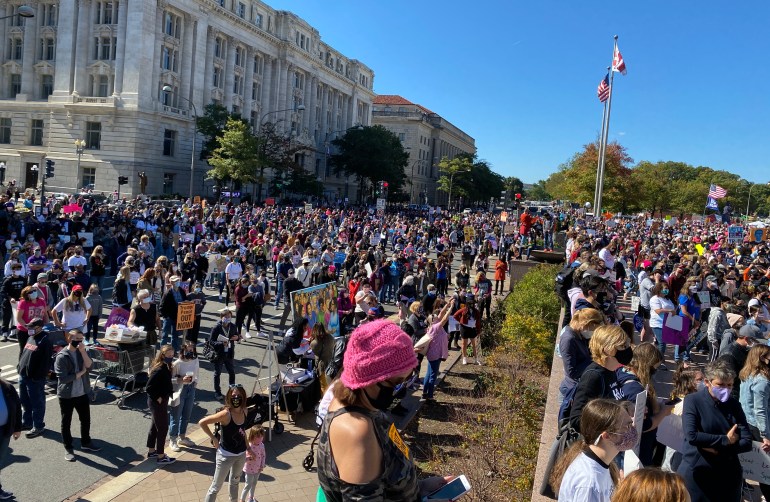 Demonstrators in Washington, DC planned to march to the US Capitol and US Supreme Court buildings [Daniel Slim/AFP]It was the second event organised by the Women’s March this year after thousands rallied around the country in January for the fourth annual march.

Several speakers urged demonstrators to vote Trump out of office on November 3, and chants of “vote him out!” could be heard during the march.

Event organisers also stressed the need to send a clear message of opposition to Barrett and any potential curbs on women’s rights.

If confirmed, the conservative judge would give the nation’s top court a 6-3 conservative majority – and rights groups have said they fear Barrett intends to restrict access to abortion and other civil liberties.

Jasmine Clemons, a patient advocate at Planned Parenthood, a reproductive healthcare organisation, said she personally “had to overcome far too many obstacles” to have access to an abortion in the US.

“We are here in honour of all the people who have fought for this right, like Justice [Ruth Bader] Ginsburg.”

Ginsburg’s death in September brought abortion rights into the spotlight ahead of the US election. 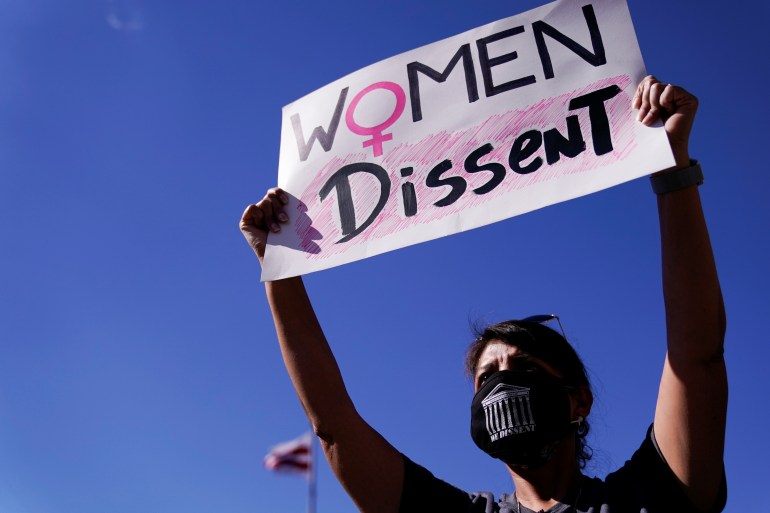 Republicans have sought to push Barrett’s nomination to the US Supreme Court through ahead of the presidential election on November 3 [Erin Scott/Reuters]Republicans in the US Senate have sought to push Barrett’s nomination through before the vote, drawing the ire of Democratic legislators who say the next president should decide who fills Ginsburg’s seat on the top court.

The Senate Judiciary Committee has set an October 22 vote on Barrett’s nomination.

Meanwhile, a conservative women’s group, the Independent Women’s Forum, said it was organising a counterprotest in the US capital on Saturday under the slogan, “I’m With Her”, to show support for Barrett.

“The Women’s March flies under the banner of feminism, but it really isn’t promoting equality or opportunity for women. That’s why these so-called feminists are fighting a highly qualified Supreme Court nominee,” the group said on its website. 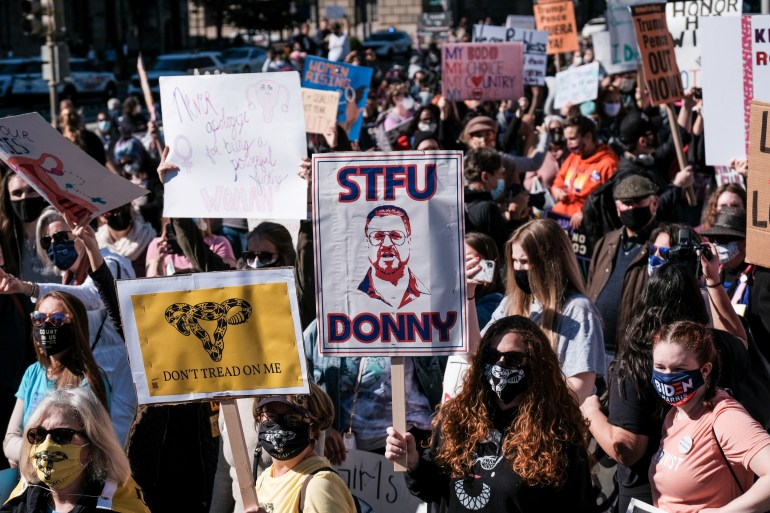