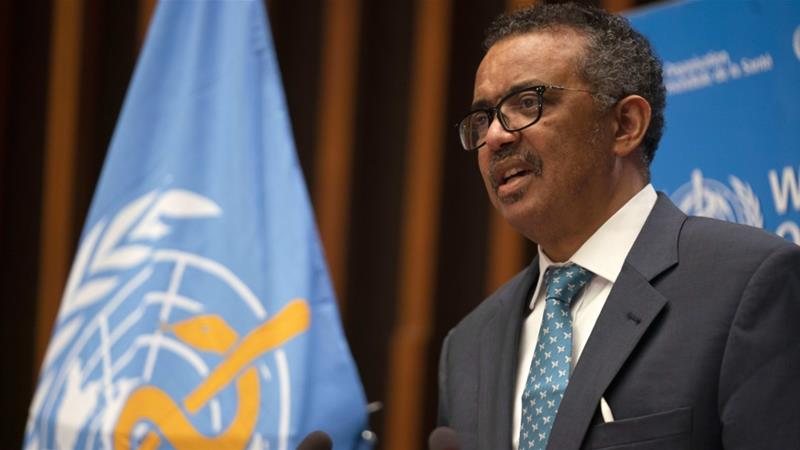 The head of the World Health Organization (WHO) has pledged an independent evaluation of the global coronavirus response would be launched as soon as possible, with China, in an about-face, saying it backed such an investigation – but only after the pandemic had died down.

WHO Director-General Tedros Adhanom Ghebreyesus made the promise during an unprecedented virtual meeting of the WHO’s decision-making body, the World Health Assembly (WHA).

The WHO’s response to the pandemic has been criticised by some, most notably United States President Donald Trump, who froze Washington’s funding to the multinational organisation in April. Addressing the two-day forum on Monday, US Secretary of Health and Human Services Alex Azar called WHO’s response a “failure” of information gathering and transparency that “cost many lives”.

A resolution drafted by the European Union also called for an independent evaluation of the international health response. On Monday, it appeared to have won consensus backing among the health body’s 194 member states. Such an investigation is expected to shed light on the origins of the virus, China’s early handling of the outbreak and the conduct of the WHO.

Tedros, who has always promised a post-pandemic review, said the independent evaluation would come “at the earliest appropriate moment” and provide recommendations for future preparedness.

“We all have lessons to learn from the pandemic. Every country and every organisation must examine its response and learn from its experience. WHO is committed to transparency, accountability and continuous improvement,” Tedros said.

The review must encompass responsibility of “all actors in good faith,” he added.

Despite the criticism, the WHO’s seven-member internal oversight body also issued its first report of the organisation’s pandemic response on Monday, saying the WHO “demonstrated leadership” in handling the pandemic between January and April, while calling for some reforms.

The report backed a probe into the global response, but said conducting it during the heat of the pandemic “could disrupt WHO’s ability to respond effectively”.

It also defended the organisation, saying “an imperfect and evolving understanding” is not unusual during the early phase of a novel disease emergence and, in an apparent rejoinder to Trump, said “rising politicisation of pandemic response” was hindering the effort to defeat the virus.

China, which has previously opposed calls for a review of the origin and spread of the coronavirus that first appeared of the city of Wuhan in December, also signalled that Beijing would be amenable to an impartial evaluation of the global response once the pandemic is brought under control.

Such an investigation “needs a scientific and professional attitude, and needs to be led by the WHO. And the principles of objectivity and fairness need to be upheld,” Chinese President Xi Jinping told the assembly on Monday via video.

He continued to fiercely defend China’s response to the outbreak, calling the pandemic the most serious global public health emergency since the end of World War II.

“All along we have acted with openness and transparency and responsibility,” he said.

Xi also pledged $2bn over two years to help with the COVID-19 response and said any vaccines developed against the disease by China will be made a public good.

United Nations Secretary-General Antonio Guterres, in opening the meeting on Monday, called the WHO “irreplaceable” and condemned countries who failed to work together.

“We have seen some solidarity, but very little unity, in our response to COVID-19,” he said.

But his words were soon followed with further discord, as US Secretary of State Mike Pompeo, in a statement, condemned a decision by WHA members to delay discussion of whether Taiwan will be granted observer status.

Beijing considers the autonomous island a province awaiting reunification and seeks to exclude it from all international organisations.

Pompeo said the WHO leader “had every legal power and precedent” to include Taiwan in the meeting.

“Yet he instead chose not to invite Taiwan under pressure from the People’s Republic of China,” Pompeo said.

Iran, for its part on Monday, condemned US sanctions as “inhumane” for causing “unnecessary suffering and pain” for its population during the pandemic.

“The US must be held to account for its intensifying unilateral sanctions against Iran and other affected nations,” Saeed Namaki, Iran’s health minister, said in a virtual address to WHA.

Washington has imposed a campaign of “maximum pressure” sanctions on Iran since withdrawing from Iran’s 2015 nuclear accord with world powers two years ago.

The US did not respond to Iran’s allegations during its address to the assembly.