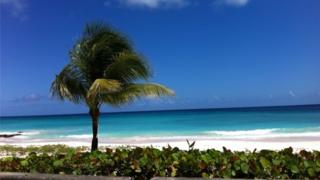 Bored of working from home, wishing you were on a beach instead?

That could be a real prospect under a new scheme launched by the government of Barbados.

The Barbados Welcome Stamp, which has just started taking applications, gives international visitors the opportunity to work remotely on the island for up to a year.

Palm trees, sun, and blue skies sound like a dream to many, but even stunning locations have their pros and cons, especially during a pandemic. So what can remote workers expect if they take up the tempting offer?

To qualify, you must earn at least £39,760 (US$50,000) per year, and have health insurance in place. There’s also some national security vetting.

Once applications are submitted, applicants will hear within a week whether they’ve been successful. The scheme is proving especially popular in the US, UK and Canada.

The island is an independent country, but also an English-speaking part of the British Commonwealth. One of its nicknames is “Bimshire”, often shortened to Bim – a nod to its UK ties. Barbados already has an active expat community who live there full-time or for part of the year.

“We have a near idyllic climate,” declared Barbados Prime Minister Mia Amor Mottley in a recent interview.

That’s certainly true if you like the heat. The weather is largely sunny year-round, with about eight hours of daily sunshine. The average temperature is 27C (81F).

Barbados has a rainy or hurricane season that starts in June and ends around November. When it does rain, it tends to be a sudden downpour that often clears up soon afterwards.

The last hurricane to hit the island was Hurricane Ivan in 2004, in which one person died – and the worst was back in 1955 when Hurricane Janet caused 38 fatalities. Due to its easterly location in the Caribbean, Barbados is off the path of most regional hurricanes, but can be affected by tropical storms.

There are occasional reports of earthquake tremors, but they tend to occur at sea.

The island is asking people to come with their own health care plan in order to access services. If newcomers don’t have one in place before departure, there are local insurance companies serving expats.

Medical treatment can be expensive in Barbados, and the UK government advises that British nationals have “adequate travel health insurance and accessible funds to cover the cost of any medical treatment and repatriation”.

Prime Minister Mottley has been praised by the World Health Organization for her handling of the coronavirus crisis, and is proud of the island’s “strong public health regime”.

Barbados imposed a curfew on 28 March that later became a full lockdown. From mid-April, people were permitted to go to supermarkets and banks on certain days of the week according to their surnames, with dedicated shopping days for disabled people and senior citizens.

According to the coronavirus figures from Johns Hopkins University, at the time of publication, there were 108 cases recorded and seven people died from the virus in Barbados.

There are a number of isolation and quarantine centres on the island, where arrivals with Covid-19 symptoms would be treated. Barbados has produced Covid-19 travel protocols for visitors.

The island is 21 miles long and 14 miles wide, and has a population of approximately 287,000, equivalent to the London borough of Greenwich.

Barbadians, also known as Bajans, live all over the island, with the capital Bridgetown the most densely populated.

Homes in coastal areas are considered the most desirable, so they’re also the most expensive. Options include staying in a villa, apartment or hotel, or renting a house.

For action-packed beach time, there’s surfing, scuba diving, and jet-skiing. Or since that can be thirsty work, you could tour the local rum distilleries.

Bajans like to “fête” or party at any time of the day with music and food at organised events.

An area in the southern part of the island, Oistins, is popular among locals and visitors alike, especially for Friday night dancing. You can sample the local dishes, including fish fresh from the sea, or take your pick of the bars.

Businesses got the all-clear to reopen in mid-June, and people are allowed to gather again if they wear face masks and practise social distancing of 1 metre (3ft).

As with every place touched by coronavirus, some aspects of social life have taken a hit – especially large events. Fans have missed out on first-class cricket at the Kensington Oval in Bridgetown.

The major annual cultural festival Crop Over has been cancelled this year.

The festival would normally have drawn thousands of people over the course of three months – which helps explain why the government is taking extra steps to get overseas cash into the island’s economy.

How about if you have school-aged children? Not a problem says Ms Mottley, as schools will be able to accommodate overseas students aged 18 and under. That said, it’s going to cost you.

In the Barbados Welcome Stamp application, if a child is to attend school in Barbados, parents need to apply for a student visa, pay a fee of BDS$300 (£118), and state the name of the school.

Public (or government) schools are normally free for Barbadians, but long-term visitors are being asked to pay a stipend. The alternative is private schools, which charge their own fees.

Teaching in Barbados is often modelled on the British system, though at least one school offers International Baccalaureate programmes. The island is known for its high standards in education and has a 99.9% literacy rate. The World Economic Forum has ranked Barbados as having the joint ninth-best schooling system.

Barbados has high-speed broadband that has been ranked above the UK’s, so that should be no obstacle to online working. However, the cost of broadband is higher than in the UK.

When it comes to food shopping, you’ll find familiar brands in the supermarkets – but they might cost more than back home as many items are imported. To save on those Barbadian dollars, buying local might be the way to go.

Comparing utility bills such as electricity and water, Barbados is cheaper than New York and many European capitals, including London, Paris and Berlin.

So this is a downside: If you stay in Barbados for any amount of time, you will encounter some unwanted visitors such as lizards and centipedes.

Mosquitos are the most troublesome critters as their bites can cause skin blisters and irritation. The government carries out fogging – spraying pesticide to kill them off – and the usual personal methods apply: buy strong repellent from the nearest supermarket.

This is a surprise to many new visitors, but wearing army camouflage in Barbados could land you in hot water. If you’re a fan you might want to leave it in the wardrobe. Only the Barbados Defence Force can wear camouflage, and if you are caught, you could be arrested.

So, weighing up the costs and the admin, could Barbados be your new home for remote working? If so, may we wish you a happy year “working from beach”!