Malaysia’s palm oil industry has become an unexpected casualty of a row with India over disputed Kashmir.

Ties have been frosty since late September when Malaysian Prime Minister Mahathir Mohamad said India had “invaded and occupied” the Himalayan territory. Delhi revoked Indian-administered Kashmir’s autonomy in early August, and communication and other curbs remain in place in the region more than four months on.

The comments did not go down well in Delhi, and India’s top vegetable oil trade body called on its members to avoid buying Malaysian palm oil to “show solidarity” over Kashmir – a move Mr Mahathir said “amounts to a trade war”.

Palm oil is Malaysia’s biggest agricultural export. It is used extensively around the world, in everything from cooking oil, to bio-fuels, instant noodles and even pizza dough and lipsticks.

Between January-October 2019, India was the biggest buyer of Malaysian palm oil, taking in more than 4m tonnes, according to official Malaysian data. 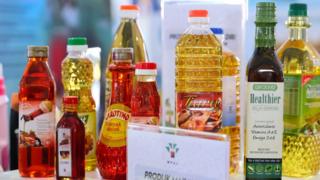 However, following Mr Mahathir’s remarks, BV Mehta, the executive director of the Solvent Extractors’ Association of India (SEAI), says most of its members shifted from Malaysia to Indonesia as a precautionary measure.

“We could sense that the Indian government may take some action in terms of tariff or non-tariff barriers due to the tense relations between India and Malaysia. We did not want to be caught in the crossfire,” he told BBC Monitoring.

And recent trade data reflects this – although there might be other factors behind the drop, such as a hike in import tax. Malaysia’s palm oil exports to India dropped from 310,648 tonnes in September to 219,956 tonnes in October – and then to 142,696 tonnes in November.

India’s envoy to Malaysia, Mridul Kumar, denied any boycott of Malaysian palm oil. “It’s the palm oil association, not the government of India,” he said on 11 December. “When you say there is a palm oil dispute, where is the dispute?”

But former Indian ambassador Vishnu Prakash says there’s “bound to be a cost if any nation decides to target India with ulterior motives”.

“It cannot be business as usual if it does so. It is impossible to delink one aspect of the relationship from the other,” he told the BBC.

And some analysts feel the tactics are similar to those China’s accused of using, where trade is a retaliatory tool.

“The large market size of India is its innate strength and [Indian Prime Minister Narendra] Modi wants to harness it to raise costs for countries that strategically cross India,” Sreeram Chaulia, professor at the Jindal School of International Affairs, told the BBC.

“It is a form of linkage between economic and political objectives in foreign policy that India had not shown earlier.”

What exactly did the Malaysian PM say to anger Delhi?

Mr Mahathir told the United Nations in late September that “despite the UN resolution on Jammu and Kashmir, the country has been invaded and occupied”.

“There may be reasons for this action but it is still wrong. The problem must be solved by peaceful means. India should work with Pakistan to resolve this problem. Ignoring the UN would lead to other forms of disregard for the UN and the rule of law,” he said in his speech.

India rejected Mahathir’s comments, saying they were “not based on facts”, and the media began to speculate that the government was considering punitive action.

It was then that the SEAI released an advisory calling on its 875 members to refrain from buying Malaysian palm oil, citing “strained relations” between the two countries.

“In your own interest as well as a mark of solidarity with our nation, we should avoid purchases from Malaysia for the time being,” it said in a statement.

Is Malaysia worried then?

Hundreds of thousands of Malaysian farmers depend on palm oil exports for their livelihood, and the government has admitted the advisory was a “major setback”.

“If there is a formal boycott, it will hit Malaysia hard in the short term,” James Chin, director of the Asia Institute at the University of Tasmania, told the BBC. “It will be very difficult for Malaysia to find a new buyer for the volume.”

But “as long as the Malaysian government can find alternative buyers over the long term, there will be limited political impact”.

Former ambassador Prakash feels that “both countries have invested a great deal of time, energy and effort in building and nurturing their relationship” and the recent development is a “mere hiccup which will dissipate sooner than later”.

Mr Mahathir did say that if India launched a formal boycott, Malaysia would need to “work diplomatically” or “reduce the kind of action that they have taken”.

And that’s exactly what Malaysia is doing, by looking at Africa as a potential customer for palm oil, possibly to offset any fall in demand by India and the EU, which has announced plans to phase out palm oil from bio-fuels by 2030.