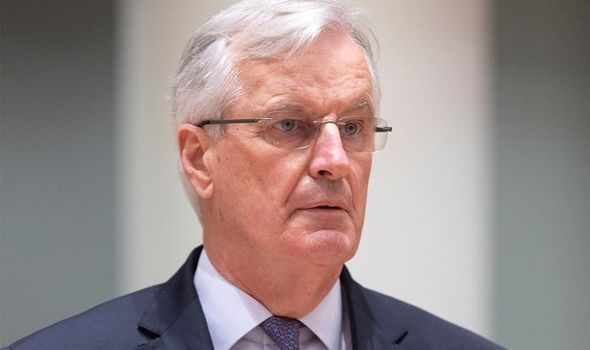 The former Brussels Brexit negotiator, who is battling to be a candidate in next year’s French presidential election, warned that his country was losing prestige and influence internationally. He also feared another member state could follow the UK out of the EU unless Brussels toughens up the bloc’s external borders.

Mr Barnier spoke out about his country’s diminished status in an interview with the Italian newspaper La Repubblica.

“I think that French influence has been decreasing for the last 10 years.

“So we have to rebuild this influence in Europe and in the international framework.

I negotiated the Brexit deal, and this is what makes me different from the rest of those guys in Brussels

“It’s our own fault. We have been diminished. We didn’t take care enough of the EU and European Parliament, of our capacity to influence those institutions.

“You know, when we are weak and when we make some mistakes, in my view it is not the fault of others.

“I don’t want to blame the others for being strong. German influence stronger than ours in Europe.”

In an apparent swipe at President Macron, the former Brussels diplomat added: “France is not great when it is arrogant. She’s not strong when she is alone.”

Mr Barnier feared another country — possibly France — could leave the EU in what he described as “another Brexit” triggered by the numbers of migrants from the rest of the world coming into the bloc.

“In France is we have no word in our constitution about immigration.

“We need to have some guarantee in the constitution, if we want to manage this with humanity and rigor.”

Mr Barnier claimed his role in negotiating the EU-UK Brexit trade deal gave him an insight into the political dangers posed by immigration not shared by many in the Brussels elite.

“I negotiated the Brexit deal, and this is what makes me different from the rest of those guys in Brussels. I don’t want another Brexit.

“What is tough and serious is a problem of migration which are not controlled,” he said.

Mr Barnier feared trust between the UK and France was “fragile” following the diplomatic spat over the new AUKUS submarine defence alliance between the UK, US and Australia.

He claimed the EU should not agree a new trade deal with the US following the spat.

“There will be consequences with Australia. I don’t see how we can conclude an EU trade agreement with Australia in the current situation; there is no trust.”