Britons are preparing for the hottest day of the year to arrive at the end of June next week, as a tropical plume is preparing to sweep in across the UK. Forecasters at Weather Outlook have even predicted 36C in London on Friday June 26. But this weekend will see slightly milder conditions, as highs will reach 22C  in many regions, just as this year’s summer solstice occurs.

Nick Finnis at Netweather said: “Sunny spells for many on Saturday and, although many will stay dry, some scattered mainly light showers are possible spreading northeast in the southwesterly breeze.

“A band of heavy rain and strong winds clearing east across all parts in the early hours of Sunday, though perhaps lingering for a time across the far north of Scotland. 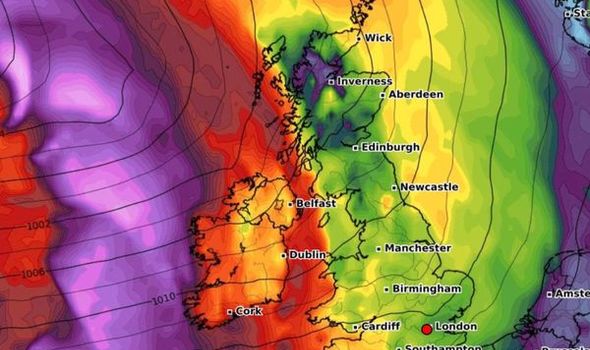 “A few lighter showers for Wales and perhaps elsewhere over England, but central, southern and eastern England likely escaping with a dry and sunny day. Fresher and breezier everywhere, temperatures reaching 18-22C.”

A forecast on the Met Office website added temperatures will be “warm” on Saturday,

It said: “A mixture of cloud, bright or sunny spells and showers. Some heavy showers across northern England, Northern Ireland and then western Scotland during the afternoon.

“Saturday: A brighter day and feeling warm in the sunshine. 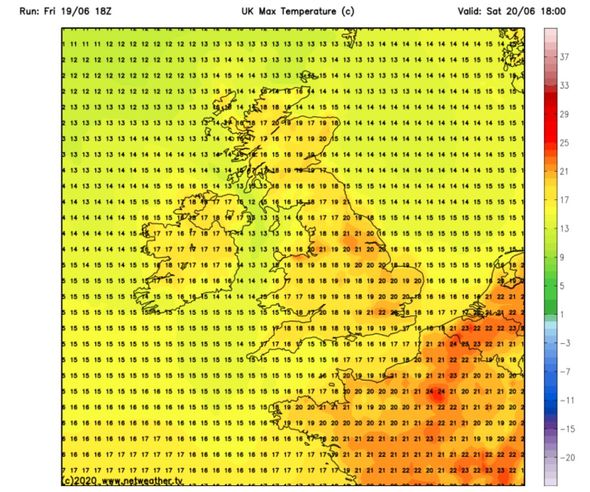 “A few isolated showers in central and southern areas, but most places dry. Turning wet and windy Northern Ireland later.”

Meanwhile, BBC’s weather forecast said: “Sunny spells for most but some scattered showers may break out in parts of Scotland and England.

“Heavy rain and fresh winds will spread into Northern Ireland and northern and western Britain later on.”

Met Office meteorologists said temperatures are forecast to rise day by day, and could reach 30C in London by Wednesday. 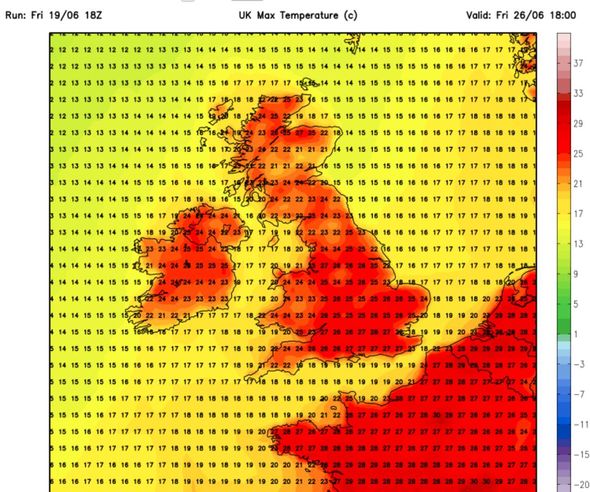 Meteorologist Emma Salter said the whole country will experience wet and windy weather overnight, although rain is unlikely to last more than a few hours.

Sunday will also be warm and sunny, though there is a divide between the south-east of the country where clear skies are expected, versus north-west Scotland and Northern Ireland where cloudy weather is due.

Ms Salter said: “England and Wales should be totally clear of cloud from Sunday, with temperatures building day on day.

“Scotland and Ireland could be more cloudy and overcast, but temperatures will still be warmer. 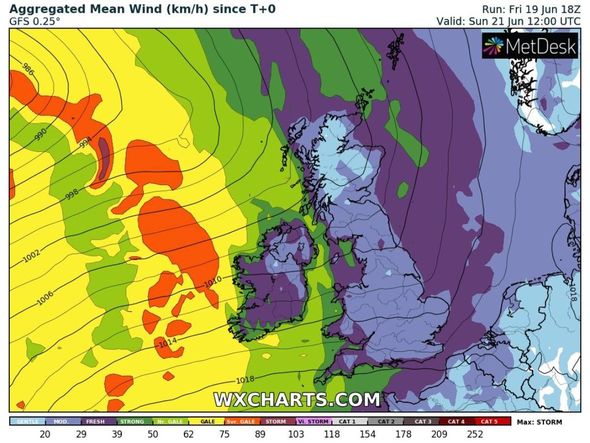 “Wednesday could be the hottest day of the year so far, with temperatures expected to reach 30C in London.”

This will good news for regions like Derbyshire, which saw flash flooding after stormy weather hit this week.