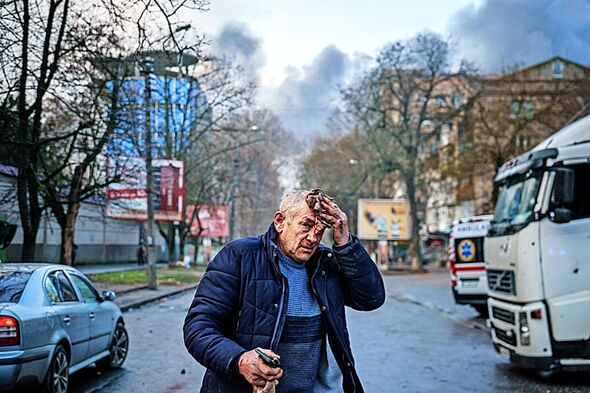 The Ukrainian President said: “Freedom comes at a high price. But slavery has an even higher price.”

Most Ukrainians are Orthodox Christians and mark Christmas Eve – the main day of the festive season in the country – on January 6.

But a growing number of worshippers in the country have been celebrating the day on December 24 and 25, in line with most Christians around the world.

“Let’s endure this winter because we know what we are fighting for. We will celebrate our holidays! As always. We will smile and be happy. As always.”

“The difference is that we will not ­wait for a miracle. After all, we create it ourselves.”

Earlier, the Ukrainian President tweeted: “I’m grateful to Rishi Sunak and the entire British people! We feel your support. We feel the light and the warmth of your hearts.”

“Light always prevails over darkness. Thus together, we will defeat evil and restore peace in Ukraine, Europe, and the world. Merry Christmas, friends!”

But as he delivered his seasonal ­messages, there was no Christmas respite from Russian despot Vladimir Putin.

Authorities said another 68 people were injured and called on residents to urgently donate blood.

Describing Russia as a “terrorist ­country”, Mr Zelensky accused Kremlin troops of “killing for the sake of ­intimidation and pleasure”.

He posted pictures of streets strewn with bodies and burning cars, saying “the world must see and understand what absolute evil we are fighting”.