John Kerry discusses meat consumption in the US

John Kerry insisted that Americans will not have to consume less meat going forward in order to combat climate change. The US Presidential Envoy for Climate shut down Andrew Marr’s vegetarian demand during an interview on the BBC this morning. The BBC host said that the “brutal truth” is that the Biden administration will have to “tell Americans to eat less meat”.

Mr Marr explained: ” While US emissions overall are going down, emissions from the US agricultural sector – which is 11 percent of the total – are going up and quite sharply.

“Isn’t the brutal truth that at some point you will have to tell Americans to eat less meat?”

Mr Kerry fired back: “Not necessarily. There is a lot of research being done now that will change the way meat is produced, for example the way cattle are reared, herded and fed.

“We don’t know some of the answers to these but I guarantee you that the United States of America is not only setting a goal but moving rapidly on track to reduce all of our emissions.”

JUST IN: Russia threat: US and UK soldiers in air assault on Baltic states 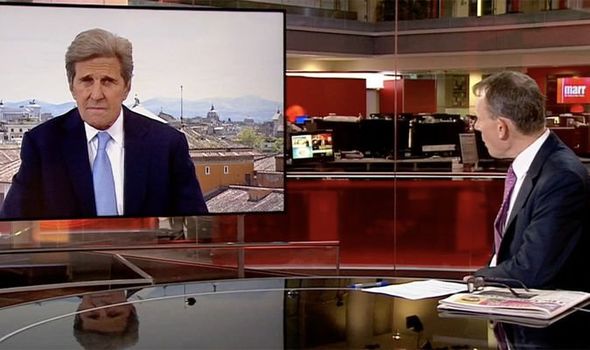 Mr Marr rebutted this, saying: “It sounds as if you are relying a lot on technology to sort all of this out, rather than changes in lifestyles.

“I remember George Bush Senior saying the American way of life is not up for debate, period and that is still your approach, isn’t it?”

Mr Kerry said that the BBC host was presenting a “false choice” to his viewers.

Both Mr Kerry and Mr Marr earned strong rebukes on social media for the remarks from the different sides of the debate. 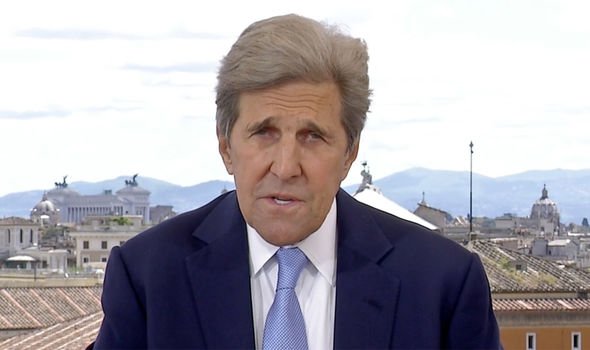 One person tweeted: “Marr gets to the meat of the issues – suggesting to John Kerry Americans need to reduce meat, coal, general consumption and reliance on technological fixes to get to #NetZero.”

Another viewer agreed: “Well if we rely on John Kerry to save the planet we are all doomed. Doesn’t want to reduce meat consumption in America, believes that cattle technology will eventually do the job. Most scientists disagree John.”

However, one viewer disagreed, saying of Mr Marr: “This man is a menace. Suggesting to John Kerry that the only way that the US can reach net zero carbon emissions, is to ‘stop eating meat’ He’s dangerous, an intelligent idiot.”