BNO News posted a video of the latest destructive scenes of the riots in the US, where a tanker truck appeared to be driving towards protesters in Minneapolis. It has not been confirmed if anyone is hurt. Protesters have flooded streets in the US after weeks of lockdowns during the coronavirus pandemic that threw millions out of work and hit minority communities especially hard. Major US cities are now fearing another night of violent protests on Sunday over the death of George Floyd in police custody. 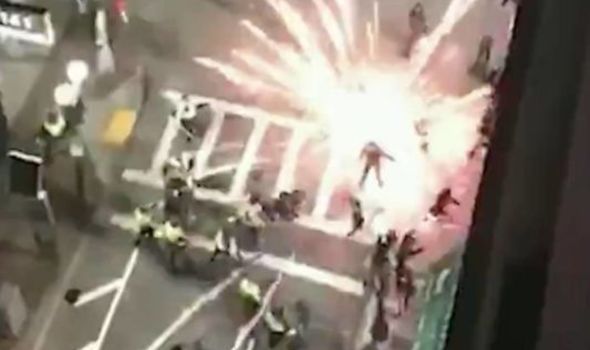 It comes as thousands of people marched across London to protest against the death of a black man restrained by police in America on Sunday.

The Black Lives Matter demonstration on Sunday was organised after George Floyd died when a white officer held him down by pressing a knee into his neck last Monday in Minneapolis.

The protest started in Trafalgar Square around lunch time, where people chanted Mr Floyd’s name and knelt on the floor en masse, before heading to the US embassy in Battersea.

One demonstrator said the protests were “very important because it is sending a clear message that we have had enough racial injustice in our country”.