The US election will take place on Tuesday, November 3 pitting incumbent US President Donald Trump against his Democratic Party challenger Joe Biden. It takes 270 electoral votes to win the US presidency. Express.co.uk speaks to Betfair exclusively about what the bookies think will happen on election day in each US state.

The race for the White House now has less than seven days until its conclusion.

Donald Trump and Joe Biden are currently visiting places around the US to try to win votes ahead of election day.

The most recent poll conducted from October 25 to 26 and published by Emerson College of 1,121 people showed Mr Biden winning with 51 percent support, compared to Mr Trump’s 47 percent.

The penultimate poll showed an even tighter race with just a two percentage point difference. 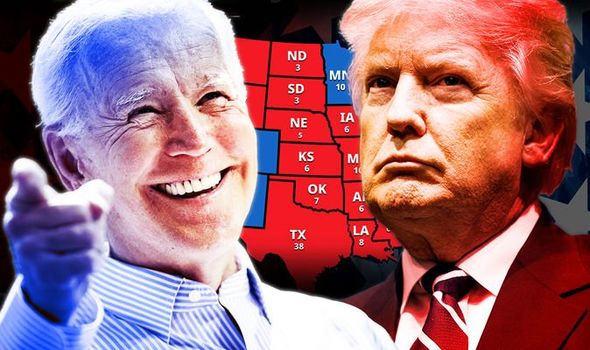 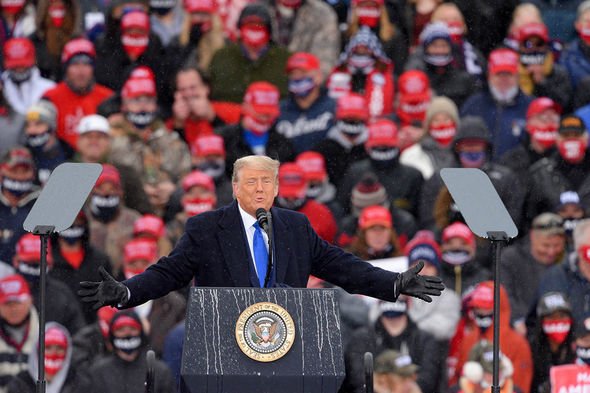 Mr Trump is following 9.2 percentage points behind with a 42.8 percent average.

The gap between the two averages has dropped by 0.2 percentage points since Monday.

Experts claim it is a tight race and how each state votes will be crucial.

This has prompted each contender to visit certain states as their campaigns draw closer to the end.

Mr Trump will visit Wisconsin, Michigan and Nebraska on Tuesday before heading to Arizona and Nevada on Wednesday.

On Tuesday, Mr Biden visited Georgia, which is a red state Mr Trump is at risk of losing. 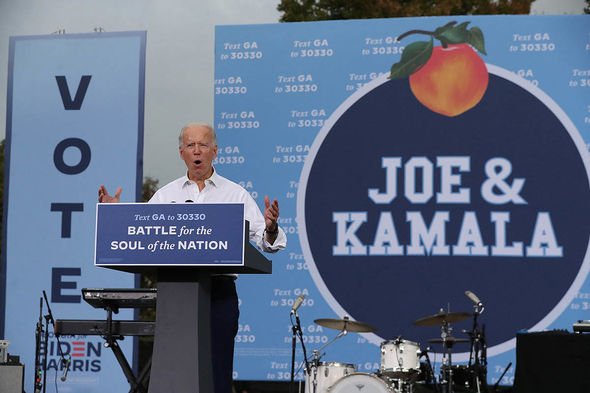 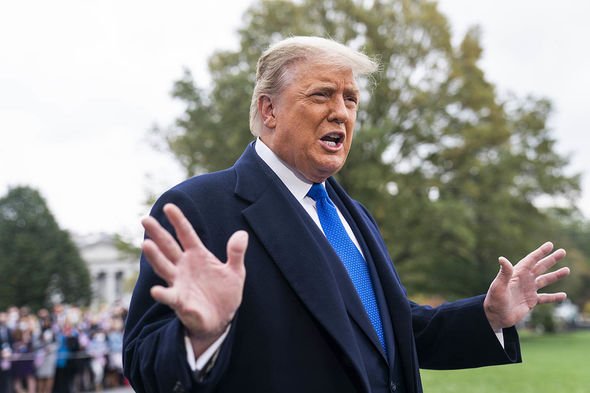 More than 71 million people have submitted early votes in the USA so far according to the US Elections Project.

This is a record-breaking surge in early voting via postal votes or in-person.

According to the US Election Project, the total votes by party registration are as follows:

Bookmakers Betfair has created a state map showing how each electoral seat is likely to vote.

Each elector represents one electoral vote and there are 538 in total.

A candidate needs to gain a majority of these votes, meaning at least 270, to win the presidency.

Generally, US states award all their electoral college votes to whoever won the poll of ordinary voters in the state.

For instance, in Texas, if a candidate wins 50.1 percent of the vote they are awarded all 38 of the state’s electoral votes.

However, a candidate may win by a landslide and still pick up the same number of electoral votes. 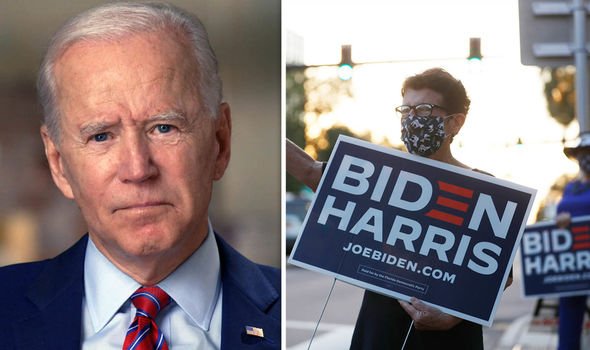 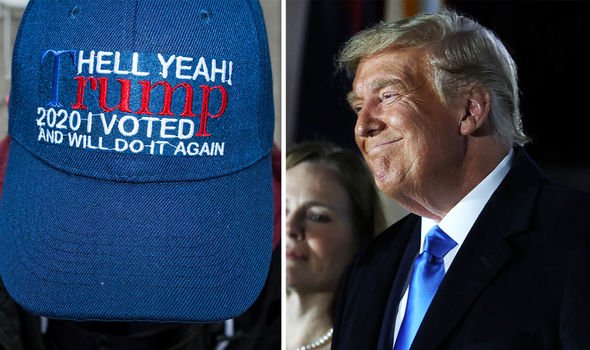 The election often comes down to the battleground “swing states” where the vote could go either way.

Each presidential candidate targets specific “swing states” in a bid to win these states.

Experts claim an election can be won or lost based on how these swing states vote.

Betfair’s spokesman Darren Hughes said: “From the odds on the Betfair Exchange, there are 11 clear swing states – determined by odds changes since the start of 2020. Swing states are states that have historically swung between voting Democrat and Republican, with no discernible pattern.

“Unlike states like Texas and New York, which are traditional Republican and Democrat states, swing states are often unpredictable, and therefore are often viewed as the most important states in an election.” 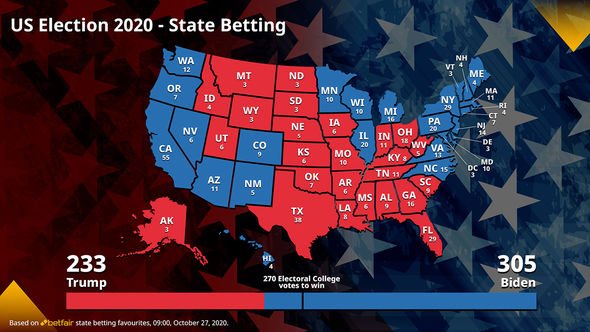 Pennsylvania is the most important state according to the Betfair spokesman.

He added: “Trump simply cannot lose this state if he expects to keep the White House, and while it wouldn’t be such a hammer blow to Biden, the collateral effect of Trump winning the state on neighbouring Michigan and Ohio would heavily narrow Biden’s path to the White House.

“Odds of 4/7 (62 percent) suggest that Biden may be safe, but it’s worth bearing in mind that his odds were 4/9 (69 percent) in July, and Trump has been heavily targeting the Oil State. Biden’s debate comments about shutting down the oil industry, which provides tens of thousands of jobs in PA, will have done him no favours here, and Trump will look to capitalise in these final days.

“Despite this, based on the current state betting odds, we can estimate Joe Biden will be the new United States President next year, with Betfair Exchange projecting the former VP collects 305 Electoral College votes.

“Trump could find victories in Florida and North Carolina, two of his key targets for re-election, but even winning here wouldn’t be enough to close the gap – with Biden sweeping up the traditionally Democratic coastal states.”

The states identified as swing states and the odds of a win for a Republican Party or Democratic Party win are as follows:

The Betfair state map shows how Mr Biden is forecast to make the following gains from Mr Trump’s 2016 wins: