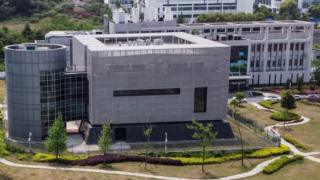 While the Trump administration has publicly pushed the line that the coronavirus outbreak originated in a laboratory accident, some of its close allies are more cautious.

UK officials believe it is not possible to be absolutely sure about the origins but point to scientific opinion suggesting the most likely scenario is that it was from a live animal market. However, they add that it is impossible to rule out the theory of an accidental release from a lab without a full investigation.

Their view echoes comments on Tuesday by Australian Prime Minister Scott Morrison, who said: “We can’t rule out any of these arrangements… but the most likely has been in a wildlife wet market.”

In the US, the intelligence community has also been more cautious in its public position than its political leaders and, last week, it issued a carefully worded statement.

It said that it concurred with the “wide scientific consensus” that Covid-19 was not man-made or genetically modified. It then added it would “continue to rigorously examine emerging information and intelligence to determine whether the outbreak began through contact with infected animals or ,if it was the result of an accident at a laboratory in Wuhan”.

However, both President Donald Trump and Secretary of State Mike Pompeo have since pointed strongly towards the lab accident theory without providing any specific evidence. Mr Pompeo said the evidence was “enormous”. It is possible that there could be lines of intelligence which could be used to support that theory, but they may not be confirmed or reflect the overall balance of evidence.

US intelligence, like other countries, has devoted extensive resources to try and understand what has been happening within China, and some of the information could be highly sensitive.

Dr Anthony Fauci, director of the US National Institute of Allergy and Infectious Diseases, told National Geographic on Monday that he did not entertain the lab theory. The World Health Organization (WHO) also says it has not received any evidence from the US to back up the lab theory.

Intelligence may well point to China having tried to play down or hide details of the initial outbreak, although this is different from hiding the exact origin of the virus. However, it may well add to the confusion and suspicion. China so far does not appear willing to allow an international, transparent investigation despite growing calls for one.

UK politicians and officials have been wary of speaking openly about their view of the virus origins, largely because of the risk of highlighting differences with Washington or getting into a diplomatic row with China – the latter is something the Trump administration is less concerned about, and may well positively welcome as an issue in an election year.

On Monday, UK Defence Secretary Ben Wallace said he would not comment on intelligence information but added that China did have to answer questions about how quickly it had reported the outbreak, and needed to be “open and transparent” about what it learned.

UK officials also say they are unaware of a “Five Eyes” report that was referenced over the weekend in Australian media – Five Eyes is the intelligence alliance consisting of the US, UK, Australia, Canada and New Zealand. The media report talked of a 15-page document detailing China’s covering up of the early stages of the outbreak.