The left-of-centre party hopes Davey can turn its fortunes around after a series of poor election results. 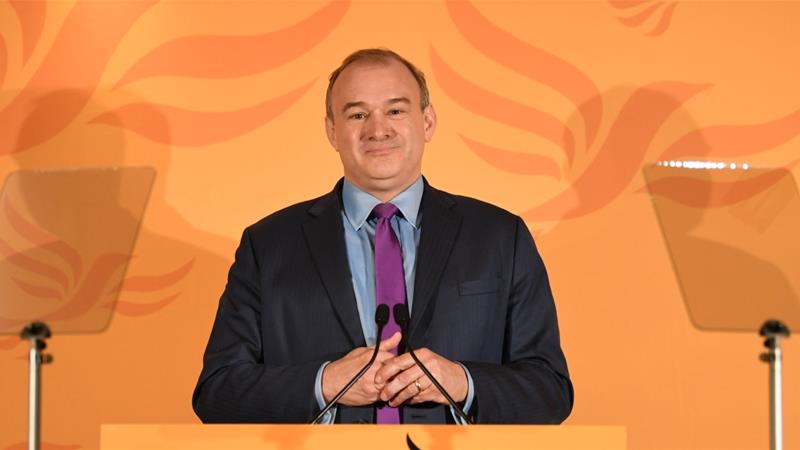 The United Kingdom’s Liberal Democrats have announced former cabinet Minister Ed Davey as the party’s new leader, in hopes he could turn its fortunes around after a series of poor election results.

Davey, the left-of-centre party’s acting leader, said in a brief speech on Thursday he wanted to rebuild the party “to national relevance”.

The Lib Dems, as they are known, won just 11 seats in Parliament in last year’s election, and an internal inquiry had likened the party’s poor performance to a “high-speed car crash”.

“We have to wake up and smell the coffee,” Davey said on Thursday. “Nationally, our party has lost touch with too many voters.”

“Voters have been sending us a message but we have not been listening. It is time for us to start listening,” he said.

Davey, 54, comfortably defeated newcomer Layla Moran in a campaign that was mostly conducted online because of the coronavirus pandemic. He is the Liberal Democrats’ fourth leader in five years.

The party was last in power as the junior partner in a governing coalition with former Conservative Prime Minister David Cameron, but it has since suffered poor poll ratings and seen its influence significantly diminished.

Many members felt betrayed by the party’s decision to join forces with the Conservatives, and in the 2015 election the party’s seats were slashed from dozens to just eight.

Last year, leader Jo Swinson stepped down after she lost her own seat to the Scottish National Party in the general election.

Swinson had led a campaign promising to revoke Brexit should her party win a majority. Critics say she had badly misjudged the public mood by so strongly backing the “Remain” stance.