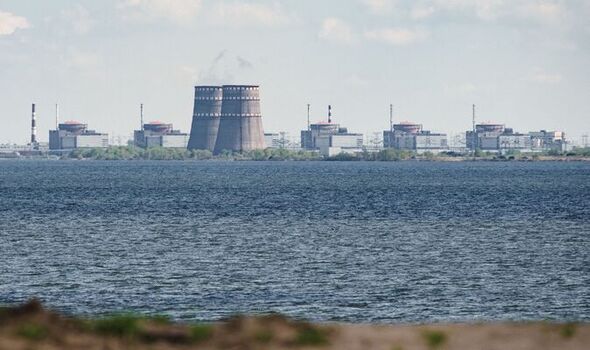 Shelling was directed towards the Zaporizhzhia site and the industrial area of Enerhodar, next to it. Enerhodar’s Ukrainian mayor, Dmytro Orlov, who evacuated to Kyiv-controlled territory in April, said residents had informed him of the latest attack. However, it was not clear if any shells had landed inside the complex.

Last night there was no indication of any unusual levels of radiation reported.

But Russian-installed official Vladimir Rogov accused Ukrainian forces of being behind the attack.

Both sides have blamed each other over multiple recent incidents of shelling, which risks unleashing a major disaster.

The G7 group of world leaders has called on Moscow to withdraw its forces from the power station, which continues to be operated by Ukrainian staff, now under Russian control.

It said Russian troops had parked a self-propelled howitzer outside the nearby town and had planted a Ukrainian flag on it.

It added that a strike on Thursday, on the territory of the Zaporizhzhia plant, which damaged water-pumping infrastructure and a fire station, had been conducted from a nearby Russian-controlled village about four miles east.

Recent attacks have left the plant connected to the Ukrainian energy grid by only one transmission line and further damage may risk it going into “blackout mode”, which could jeopardise efforts to keep its nuclear fuel safe. Russia continues to deny International Atomic Energy Agency officials access to the plant, with Ukrainian officials warning Russian forces may deliberately sabotage it, causing a nuclear incident.

The shelling came as a missile strike hit Ukraine’s second biggest city, Kharkiv, and battles continued along the eastern front.

Russian forces and separatists advancing on two small cities to the north of Donetsk – Avdiivka and Bakhmut – were halted by Ukrainian units.

It came as Mykhailo Podolyak an adviser to president Volodymyr Zelensky yesterday spoke of how the war with his country started with Russia’s seizure of Crimea in 2014.

Mr Crump said that an attack on the Saki airbase in Crimea on Thursday, for which Ukraine has not claimed responsibility, will not mark an immediate turning point in the war. But it exposed the failure of Russian air defences and the increasing vulnerability of its military bases and depots, which will have to be dispersed and will tie up troops to guard.

Crucially, he said, it also struck at the heart of what Moscow now considers its own sovereign territory.