Sunday morning in particular could see heavy rain across northern and western England and Wales, according to the Met Office. Steven Keates, Met Office meteorologist, said there would be “showers from the word go” across these regions on Saturday as well.

He said: “Most of us will get to see some sunshine from time to time but equally there will be a fair number of showers on both Saturday and Sunday.”

However, next week could see temperatures creep back up towards summer levels once again as southern areas enjoy highs of up to 24 degrees, according to the BBC.

For this weekend, showers will continue to come in from the west all though Saturday and into the evening.

A cold night will follow, with much of the UK set to drop into single figures. 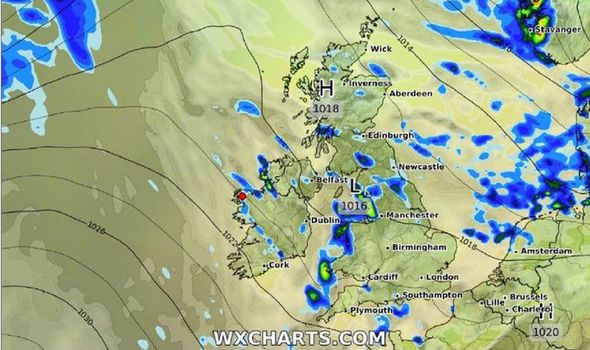 Sunday morning is likely to bring heavier rain to parts of northern England and Wales, while the South West could see more showers as the afternoon continues.

Scotland, however, should remain largely dry through much of Sunday, with northern areas even being sunny albeit cool – around 13 degrees.

Mr Keates added Britons should expect a “cool-feeling weekend” due to a breeze coming from the North West.

According to BBC Weather presenter Stav Danaos, the weather over the next couple of days is being driven by high pressure to the south west of the UK coupled with low pressure in the north east. 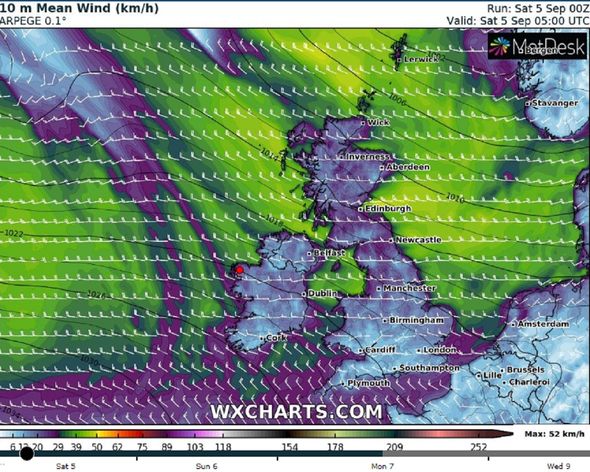 Saturday will see temperatures generally the same across the whole of England – around 18 degrees during the afternoon – though Scotland will be much cooler, between 13 and 15 degrees.

Sunday’s temperatures will stay around 18 degrees – potentially reaching the low 20s – in the south, while northern England and Scotland will be in the mid-teens.

However, Mr Danaos added western areas of England and Wales could even experience thunder alongside heavy showers on Sunday morning.

The north of the UK will again see some heavy rain and wind on Monday, driven by low pressure in the region. 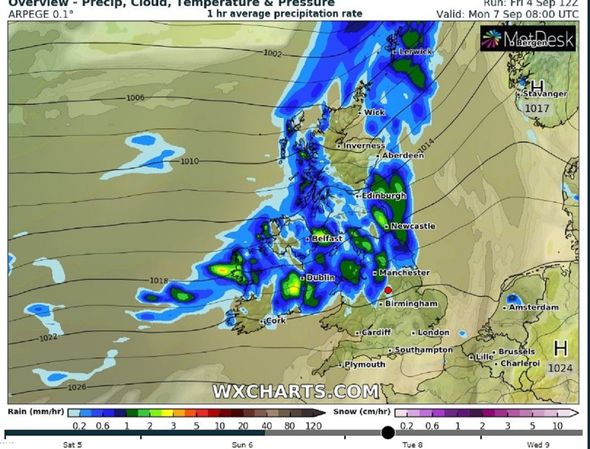 This will be accompanied by a warm air mass during the day which will heat up the entire country – for Scotland between 15 and 18 degrees with southern England reaching as high as 21.

Mr Danaos said: “And that warmer air mass with be with us as we move through Tuesday and Wednesday.

“Given some sunshine in the south, because it’s going to be rather cloudy I think next week, we could see 24, 25 degrees. But then it cools down for all areas by the end of the week.”

This warm air mass will remain over the country through Tuesday and Wednesday as well. 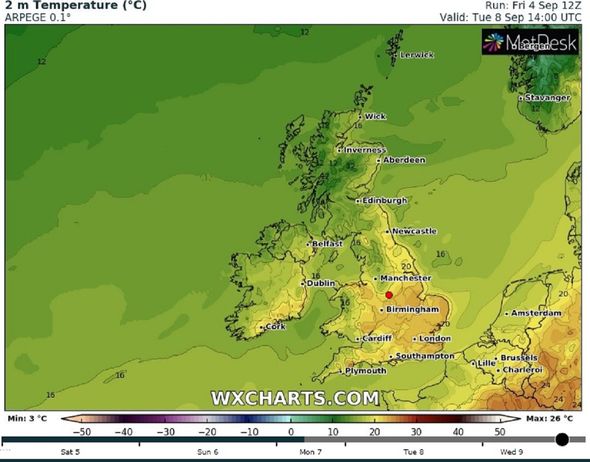 The Met Office confirmed the warm yet unsettled weather from Monday to Tuesday. It said: “Dry start Monday, before cloud and some rain in the northwest pushes erratically southeast across all areas through Tuesday and into Wednesday. Rather warm ahead of this, particularly Tuesday.

There are currently no weather warnings covering any part of the UK.

Pollen count is expected to be low across all parts of the UK from Saturday through to Tuesday.