Temperatures in Britain could rise to be as high as 29C in many parts of the country this weekend as a sizzling heatwave grips Europe. While in Europe, weather maps show temperatures could reach a scorching 43C towards the end of this week. The warm weather will be brought by a large plume of air sweeping across Europe, before hitting Britain towards the end of the week and into the weekend.

According to the Met Office, Friday, July 17, will be warm with good sunshine in the east and south of Britain.

The warm air coming from Europe means parts of the UK will reach highs of 30C this weekend.

Forecasters expected the ‘mini heatwave’ to last all weekend, with temperatures of 27C and 28C predicted for Saturday and Sunday.

Met Office forecaster Nicky Maxey said: “Luckily, the sunshine is back over the next few days.

“It’s going to feel more like July. Friday looks like it’s going to be the hottest day, but temperatures will still be high across the weekend. 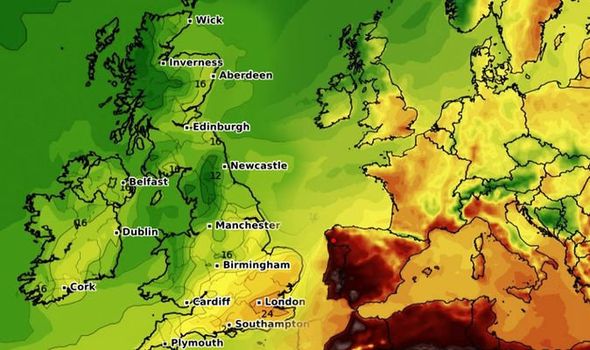 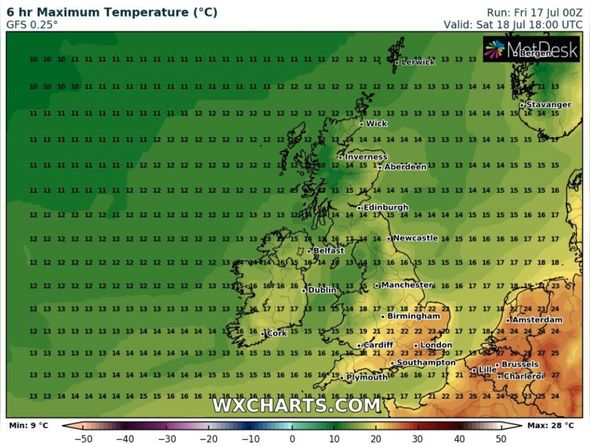 “There is a warming trend in the south later this week, certainly by the end of the week and into the weekend, with temperatures back up into the high 20s – if not higher.”

Maps from WXCharts show parts of Spain and Portugal will see the centre of the hot temperatures today, as the map turns black with 43C (or 109F) hitting at 3pm today.

The 2m temperature maps also show that parts of the south east of England could see a balmy 27C today.

Into the weekend, temperatures in the south east could peak at about 26C by 3pm on Saturday afternoon.

On Sunday, the weather charts show the whole of Spain and Portugal turn red with 40C forecast for the entirety of the country. While Britain will see cooler temperatures of up to 18C. 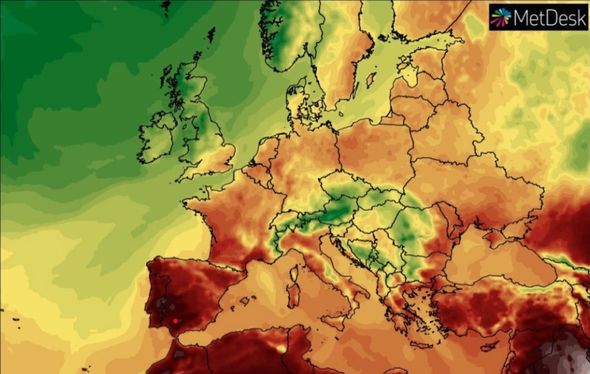 The UK will see these lower temperatures continue from Monday and into mid week, with balmy conditions picking up from Thursday midday as a sunny spells heads for Britain.

The weather maps come as Ladbrokes have July down to be a record-breaking month for sunshine.

Odds are 1/3 that temperatures of 30C or higher is recorded anywhere in the UK this weekend.

Ladbrokes spokesperson Alex Apati said: “It looks like we’re in for a scorching weekend on the weather front, with temperatures ready to rise.” The warm weather, however, will not be felt by all in the country. 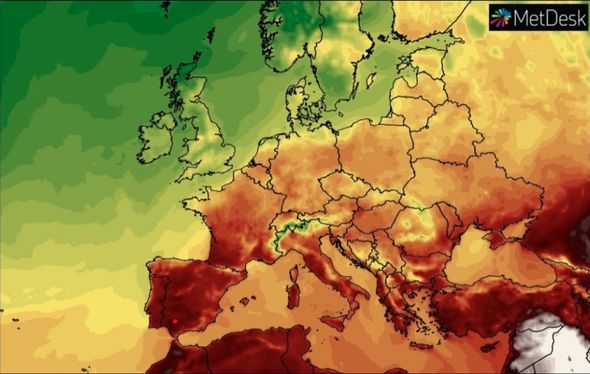 Meteorologist Clare Nasir warned a bank of rain and will will hit western parts of Scotland on Friday night, before moving down across central Scotland and Northern Ireland.

She said: “Many of us will see some brighter weather, it will feel warmer south of the rain band, with some sunshine coming through.

“That rain band pushes down towards the far north of England, and extends towards northern parts of Wales.”

Ms Nasir added: “Into the weekend, it continues its passage southwards, with some fresher air to arrive in the north and also some sunshine.”

Statistics from the Met Office show that Britain has seen just 55.5 hours of sunshine in the first half of July, compared to a yearly average of 172 hours.

Ms Maxey added: “ [The sunshine] has been even lower in some regions of Britain. Derbyshire, for example, has only seen 43.5 hours of sunshine between July 1 and July 14.

“The county gets an average of 181 hours of sunshine, so they have only seen 24 percent of what they would normally have.”

The long range forecast for July suggests good news, with many parts of Britain expected to regularly see temperatures of 20C and above.

The hottest day of the year so far was recorded at the end of June, with temperatures peaking at 32.6C in Heathrow, west London.