Much of the UK has seen damp and dreary weather this week, with persistent heavy rain and gloomy skies dominating the forecast. This will continue today and into Friday, but for those seeking the sun, a change in conditions is expected this weekend.

According to Netweather, Thursday will see a dull, damp day for much of England and Wales – especially from the midlands southwards.

Further north there may be a few sightings of the sun, but there will be some sharp showers, running east to west.

Central and eastern Scotland will be especially rainy, and widely temperatures will peak at 15 to 19C just about everywhere, feeling muggy in the south.

BBC forecaster Helen Willetts said of Thursday’s weather: “Underneath all this cloud and rain, it’s mild, it’s really quite humid out there for most of us. 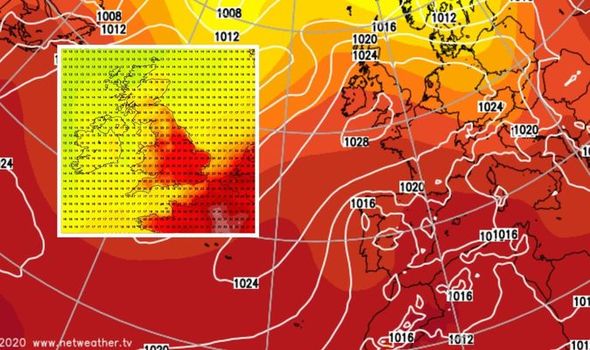 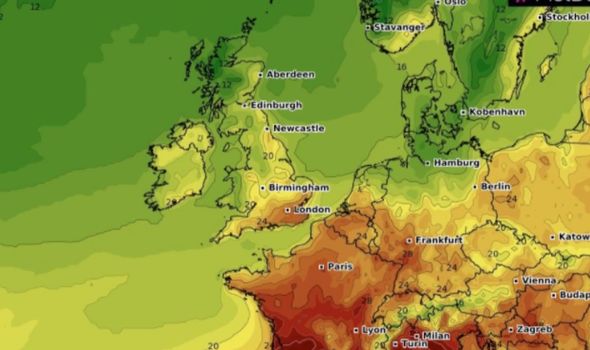 She added heavy overnight rain will “leave a legacy of a dull and drizzly weather”.

“It won’t be raining all day…there’ll be some drier spells in between and it’s quite warm…at 19 or 20 degrees, but not much brightness.”

Friday will begin to see the gloomy weather dissipate, with an area of high pressure starting to ridge in from the southwest.

Netweather forecasts any showers are likely to die away in Wales and southwest England quickly. 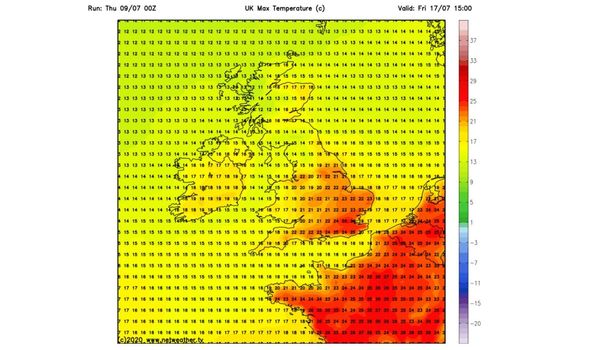 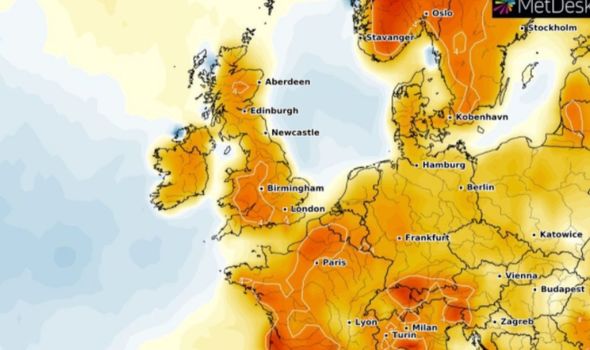 There will still be downpours to the east, but these too will die out by Friday evening.

This weekend will see the high pressure extending its influence further northeast.

On Saturday, there will still be the potential for the odd shower in northwest England and Eastern Scotland, plus there’ll be some patchy rain just grazing up close to the far north of Scotland.

However, elsewhere Saturday will be a fine and dry day with long sunny spells, just blocked out at times into the afternoon by some fair weather cumulus bubbling up.

Temperatures recovering up nearer to the average at this time of year – peaking at 18 to 22C in England and Wales, 15 to 18C in Scotland and Northern Ireland.

On Sunday, the area of high pressure will be in charge across much of the country, but some rain is likely to cross Northern Ireland, as well as potentially into western Scotland, perhaps also Northwest England later.

However, there is some uncertainty over the rain the high pressure could keep the rain away and push it further north to impact only the northwest of Scotland.

Sunday generally will see more sunshine, and it’ll be a touch warmer again with highs closing in on the mid-twenties in the southeast. 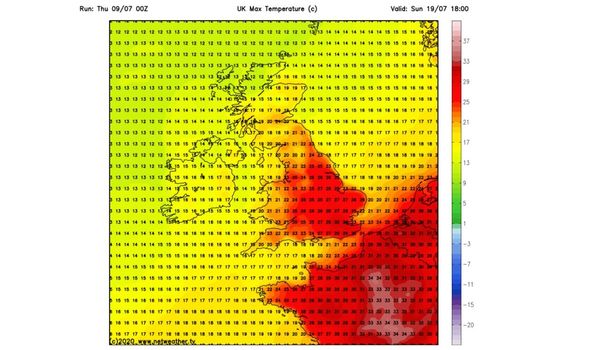 Temperature charts from Netweather show hot weather spreading from the south on Sunday, with highs of 26C possible.

This could repeat on Monday, with much of the south again seeing 26C highs as temperature maps turn red with the heat.

Asked about next week’s weather, a Met Office spokesman told the Mirror Online: “On the whole, England and Wales is looking largely settled, with temperatures in the mid-20s in the sunshine.”

However, the spokesman added: “It is too early to tell if it will be a heatwave.” 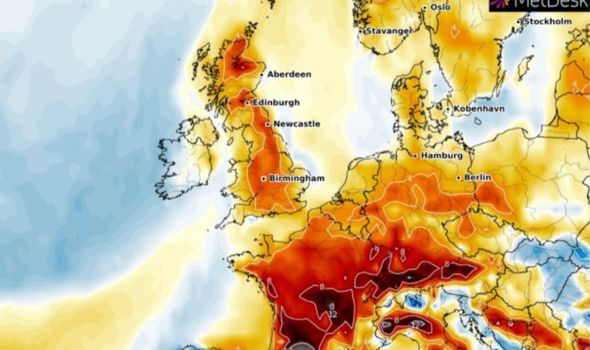 Temperatures could stay around the mid 20C for much of next week, before again hitting 26C next Friday.

And conditions will continue to heat up, with a scorching 30C predicted for the south on Sunday, July 19.

Netweather maps show much of the UK turn red with the heat as highs of 30C and just below are felt widely.

The Met Office long-range forecast for July 13 to July 22 finds mostly dry and settled weather, especially for the south of England.

The forecast states: “More unsettled conditions with spells of rain and strong winds may affect the north and northwest at times.

“Temperatures are likely to be mostly around normal, although it may become warm for a time in the south and perhaps very warm in the southeast.

“Towards the end of the period, conditions may start to trend towards more generally settled weather for most areas, but with the possibility of the occasional bout of wetter weather.”