Experts using the latest global forecast models have predicted bitter winds to sweep across the Scottish mountains by the end of September. Brian Gaze, forecaster for The Weather Outlook, claimed the charts suggested the north of the country could face “blizzard conditions” in just 10-days. But the forecaster admitted the chances of snowfall was “possible but unlikely”.

He said: “Blizzard conditions for the Scottish mountains in 10 days time if today’s GFS 12z is on the money.”

The latest charts show cooler Arctic air sweep over the north of the UK, with chances of precipitation increasing, as early as next week, prompting the forecaster to warn of a snow risk in parts of Scotland.Wind chill maps from WXCHARTS also show temperatures dropping to 0C on October 1 in areas including Inverness and Aberdeen in Scotland.

The Met Office also warned of “cold spells” from October 1 to October 15.

Its long-range forecast said: “Confidence remains low for this period.

“It seems likely that there could be changeable conditions with alternating periods of relatively settled weather, bringing an increased risk of mist and fog in the morning, and more unsettled conditions.

“The best of any settled spells will be in the south and there is a signal that these could become more prolonged during early October. 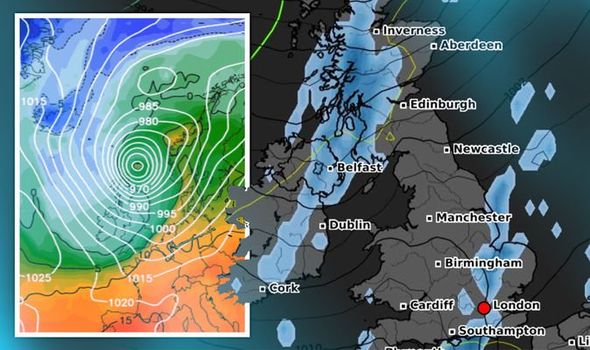 “Overall, temperatures are expected to be around or slightly above the normal.

“However, variations are to be expected as a result of the shifting weather systems, giving potential for both warm and cold spells.”

The Met Office added temperatures will turn “rather cold” in northern regions from next week.

It said: “Any isolated mist and fog patches each morning quickly clearing. Less breezy but still a chance of showers in the south. 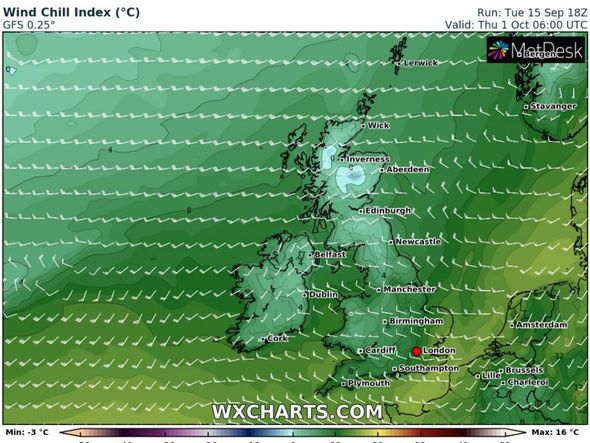 “Temperatures around average for many though probably warm in the south.

“A spell of wet and windy conditions likely to arrive in the northwest early in the week.

“Through the rest of the week a transition to more unsettled conditions looks likely to spread southeast across the country.

“Some longer spells of rain or showers for a time are likely, the rain could be heavy in places, wettest and windiest in the north and west. 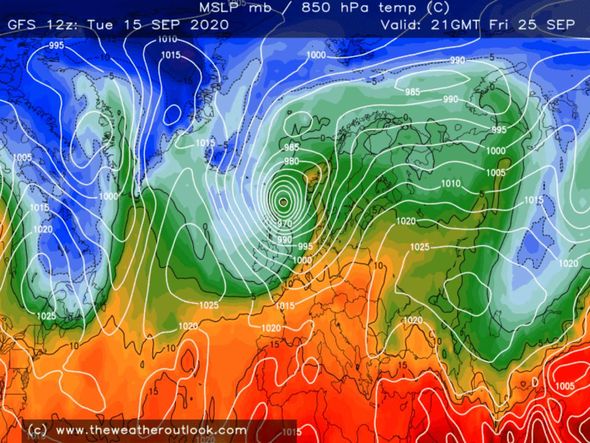 “Temperatures around average, possibly turning rather cold in the north.”

A cooler front is also pushing its way through the UK this week, meaning temperatures will drop after areas such as the south recorded highs of 32C.

Met Office Chief Meteorologist, Frank Saunders said: “On Wednesday a cold front will slowly sink southwards, bringing cloudier skies and temperatures closer to average for northern parts of the UK, but southern areas will still see plenty of sunshine and temperatures in the mid- possibly high-20s Celsius, which could meet heatwave criteria in a few locations.”

But the remaining hot weather will be short-lived as Autumn will soon be gripped by stormier conditions.

The long-range forecast on Netweather at the start of October said: “The weather is expected to remain changeable, especially in the north, through the remainder of September, with a generally westerly type. 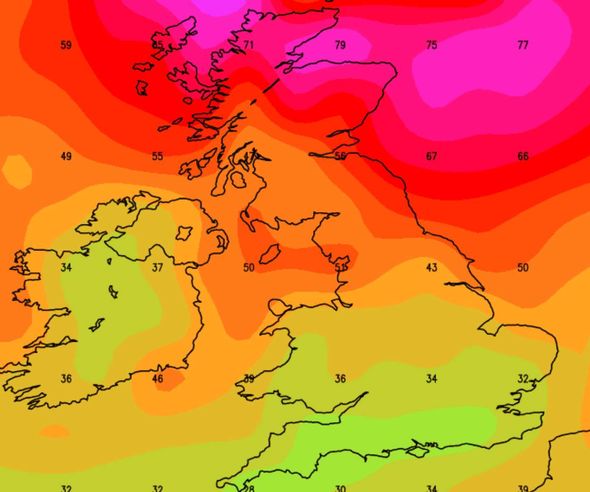 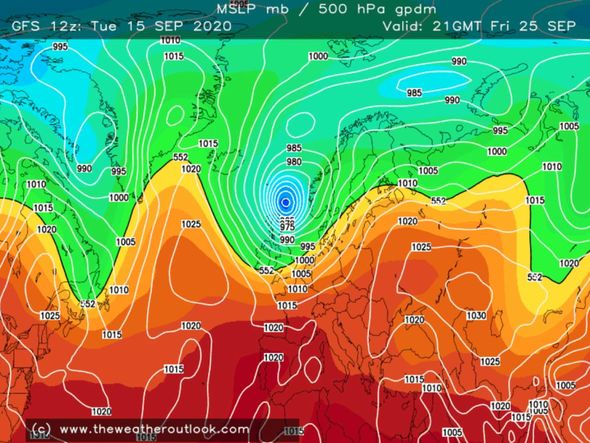 “Into early October there is an increasing chance of high pressure pushing in from the south and bringing mostly settled and warm weather, probably with a fair amount of sunshine for most, and a likelihood of more changeable weather holding on in the north and west of Scotland in particular.

“Temperatures will tend to be close to or just below the long-term seasonal norm early to midweek, with some cool nights midweek as the high pressure moves in and some fog patches in places, but will tend to rise above normal late in the week as there is a significant chance of southerly and south-westerly winds setting in.

“Rainfall totals are again mostly expected to be below normal, except in western Scotland, where near or slightly above average rainfall is most likely.”