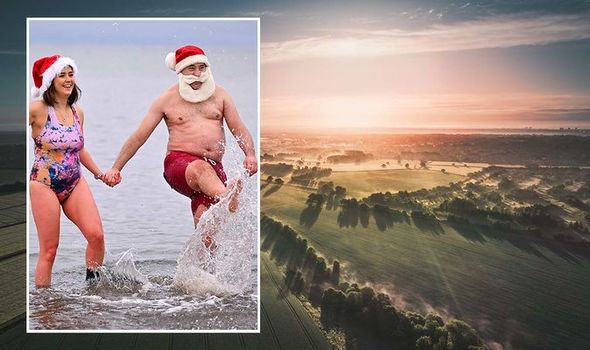 However, forecasters are predicting the mercury could soar to a spring-like 60F (15C) later this week…and stay like that until the new year. The Met Office says it will be “exceptionally mild” by the end of the week and stay unseasonably warm until we ring in 2022.

But there will be more rain for England and Wales from today, as a new band arrives from the South-west.

Meteorologist Sarah Kent said the rain would move North-east through the day and warned the South would have “beefy showers and heavy downpours in the late afternoon and evening.”

Temperatures, peaking at around 52F in the South today, could be as high as 54F in the region tomorrow ‑ and a balmy 59F on Wednesday.

The mercury will stay up into the new year. The Met Office says New Year’s Day is set for a high of 57F, although it will be cloudy.

Forecasters say those sort of conditions are usually seen in the spring and are considered very mild for this time of year.

It was a different story yesterday, when heavy snow and rain caused travel chaos across the North and Scotland.

The Met Office issued yellow warnings from Glasgow and the Forth Valley to Derbyshire.

And sea temperatures of 4C did not put off swimmers north of the border in Ayr. Others took the plunge, some for charity, in Perranporth, Cornwall and Redcar, North Yorkshire.

The snow brought sledges out in some areas, including Tow Law in County Durham.

But it also led to hazardous conditions and many roads, including the A66, closed.

Get the latest three-day weather forecast where you live. Find out by adding your postcode or visit InYourArea