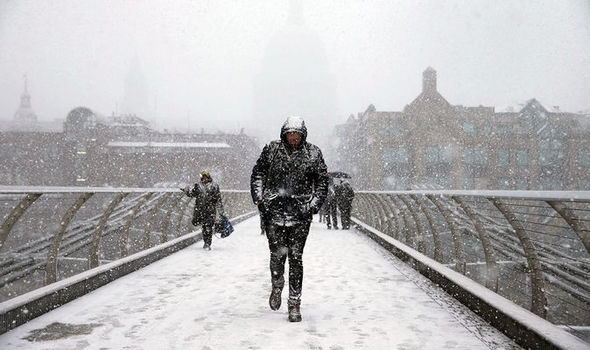 Some areas were set to shiver in lows of -10C while snow, ice and frost are expected today as temperatures struggle to get above freezing before plunging again overnight. Yellow weather warnings for ice were yesterday in place across central and eastern England, and north eastern Scotland.

Forecasters warn the dramatic dip in temperatures brought by Storm Arwen could lead to a fortnight of snow.

Any respite from the big freeze will be brief with more snow forecast for December 13.

Three people died on Friday after 100mph winds from the storm and snow wreaked havoc.

One father told how a family trip for his 49th birthday to a holiday park near Hartlepool became like “something out of Mad Max” after the storm hit.

Ian McPherson, wife Kerry, 43, children Robbie, 19, Daniel, 14, and Ella, seven, had to sleep on the site office floor as the storm destroyed accommodation.

He said: “I thought it was the end of the world, that’s what it felt like…I thought our time was up.”

Dozens of customers at Britain’s highest pub were set to spend a third night trapped by heavy snowfall.

Guests got stuck at the Tan Hill Inn, in the North Yorkshire Dales, on Friday after going to watch an Oasis tribute band.

Many have been sleeping on makeshift beds and mattresses on the floor, but they have been treated to films, a quiz night and a buffet meal.

In Llanelli, Carmarthenshire, high winds tore the roof off an animal shelter, leading to the death of a newborn puppy. Gusts of 117mph were recorded on Cairnwell in Scotland’s Highlands, while snow flurries hit the South and Midlands.

In the Peak District, lines of abandoned cars yesterday stretched along the snowbound Snake Pass. Part of the M62 near Rochdale was also closed, with 120 lorries stuck in the snow after one jack-knifed.

Football at Burnley was postponed but Manchester City’s game with West Ham went ahead Northern Powergrid said the severe gales had caused power cuts for more than 55,000 customers in the North-east.

Clive Wilkinson, incident manager, said: “We still have 16,000 off, but are continuing to work to get everyone back on.”

The Met Office’s rare red weather warning expired early on Saturday, but the forecaster said that amber and yellow warnings for wind would remain in place into the new week.

Police said one storm victim, from Lancaster, was killed at around 11pm on Friday in Ambleside, Cumbria.

Another person was killed when a tree fell on his car in Aberdeenshire.

Met Office forecaster Tom Morgan said: “There is set to be further wintry weather, with snow expected to fall across areas in Scotland and northern England, and even in parts of southern and central England.

“Parts of Scotland and northern England, where snow is on the ground, will be very cold overnight into Monday, with the temperature certainly falling below zero and even as low as -10C, which would make it the coldest night of the season so far.

“Though this is expected to be the exception rather than the rule, temperatures of below freezing will be widespread, including in London and the South-east which could hit -2C.”

A cold weather alert from the UK Health Security Agency remains in place and advises people to look out for those at risk such as the elderly.

WX Charts show the freezing weather continuing until at least next Friday across the country.

Get the latest three-day weather forecast where you live. Find out by adding your postcode or visit InYourArea