A meteorologist has described how the UK’s weather front will show a mixture of seasons in the next few days – firstly becoming unseasonably hot before temperatures take a dramatic tumble into next week. Jim Dale, from British Weather Services, told Express.co.uk how the nation would be in for two very contrasting systems starting from as early as tomorrow, Wednesday, September 21. Coats and jackets will not be needed as the mercury soars back up to heights of 21C – a thermometer reading many will be used to after a record-breaking summer. However, Mr Dale said this is above average – and the next three days will be a last hurrah before near-freezing temperatures catapult the nation back into autumn.

Mr Dale exclusively painted the picture of how far colder conditions will barge the pleasant, warm, temperatures out of the way in a matter of days.

He told Express.co.uk: “It all unveils in the rain of Monday and the cold air is in (temporarily) on Tuesday.

“The main range is 14C to 6C north to south with the odd spot in the Grampians seeing 4C or 5C. It doesn’t last, however, so this will be a short sharp spike.

“This is caused by deep low pressure transversing 1,000 miles north of the UK dragging in a polar airstream on its backside which will follow the associated cold front clearance during Monday.” 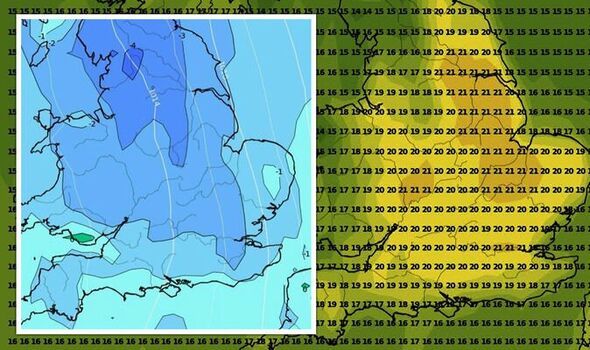 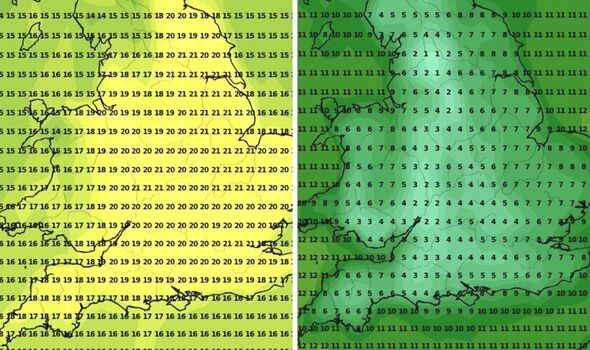 The Met Office’s forecast for the next week alludes to the rise and fall of the country’s temperature gauge.

It says: “During Sunday and early next week, it will probably turn more unsettled with rain and strong winds spreading from the north across many parts of the UK.

“Through the remainder of September conditions are likely to remain changeable with further frontal systems spreading from the west and northwest at times.

“The wettest conditions with periods of strong winds are likely in the north of the UK, with the driest weather in the southeast. Similar conditions are expected into the start of October. Temperatures near normal throughout this period.” 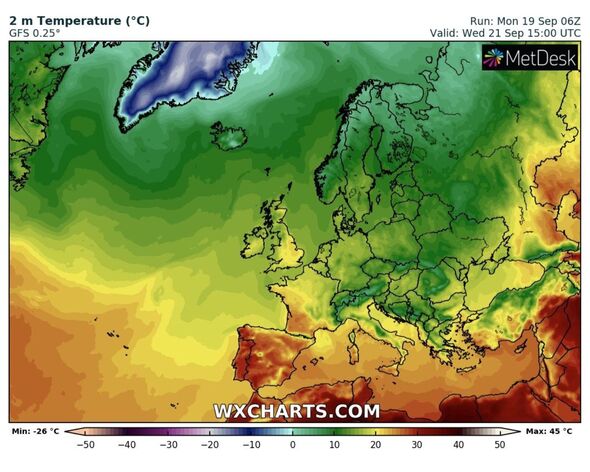 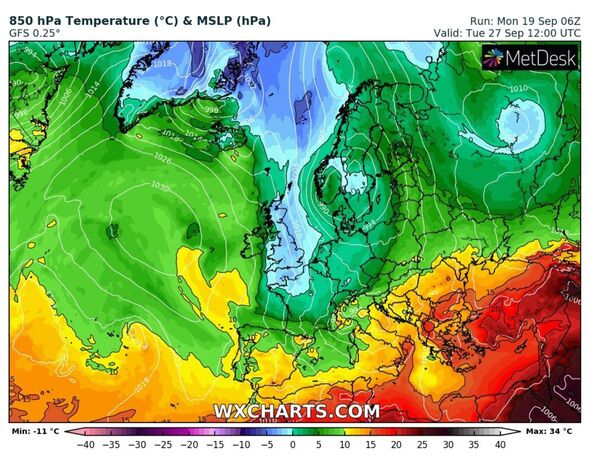 Despite this week’s warmer temperatures, BBC weather woman Carole Kirkwood has highlighted some overnight rain and misty fog patches in the early mornings.

Starting with today, September 20, parts of Britain will see some scattered showers.

She said: “”The weather this week is getting a little bit warmer, it was quite chilly over the weekend and yesterday. Fairly cloudy as well, and this morning we’re starting off on a cloudy note too.

“But we do have some rain, and that rain is fairly light and drizzly across the north and the west, it will be on and off as we go through the day and through this evening and overnight, we see the rain turn a little bit heavier.”

DON’T MISS:
Monty Don shares how to sow winter spinach in September [REVEAL]
Exact date to turn on your heating to avoid ‘unnecessary’ problems [REPORT]
Brexit battle ahead for Liz Truss on first trip to meet Joe Biden in US as PM [INSIGHT]

“Across the north west, the winds will strengthen and we could have gusts as much as 35mph and under clearer skies with light winds as we push further south.

“We could see some mist and some fog patches forming almost anywhere.”

The south and the midlands will see the warmest temperatures of this week, which will remain mild into the weekend.

But it’s the rain on Monday that will spark the start of the very short and sudden drop in temperatures – which are not set to last into October.