The Met Office issued and extended several severe weather warnings over the weekend warning Britons of an end to the stifling heatwave. Some places are likely to see extreme thunderstorms batter parts of the UK through today until Thursday, but when and where are these storms likely to hit Britain in the coming days?

The Met Office has implemented five separate weather warnings for thunderstorms from Monday through Thursday.

From Monday to Wednesday all the warnings advise of the same conditions, with the extent of rain likely to lessen on Thursday.

The warnings for Monday to Wednesday read: “Areas of thunderstorms are increasingly likely to develop over the south of the UK or nearby continent late on Sunday and will generally track north or north-westwards, potentially affecting all parts of the UK at some points during this period.

“Whilst the most intense thunderstorms, in some instances associated with large hail, will most probably be those triggered by the high temperatures of the day over England and Wales, other areas of storms producing heavy rainfall, frequent lightning and strong gusty winds could reach further north at times over Scotland and Northern Ireland.

“These could occur at any time of the day. Where the storms occur, rainfall totals of 30mm to 40mm could fall in an hour, with some locations potentially receiving 60mm to 80mm in 3 hours, although these will be fairly isolated.” 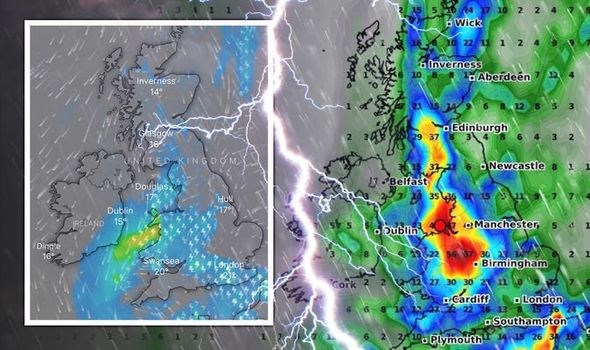 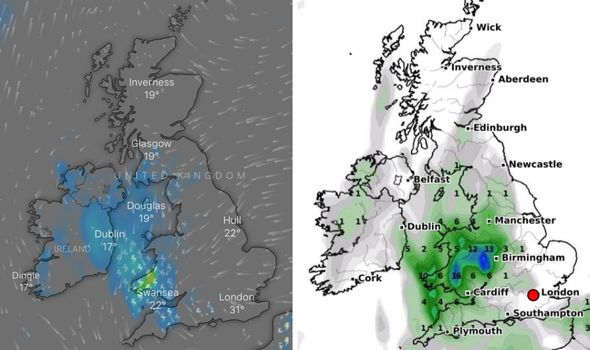 The first weather warning, which is in effect from midnight to 11.59pm on Monday, covers all of England and Wales, as well as parts of Northern Ireland and Scotland.

The area covered by this warning was reduced on Sunday to exclude parts of Scotland and Northern Ireland which will be covered by a separate warning.

The second warning, which is in effect covers the rest of Northern Ireland and a large proportion of Scotland. 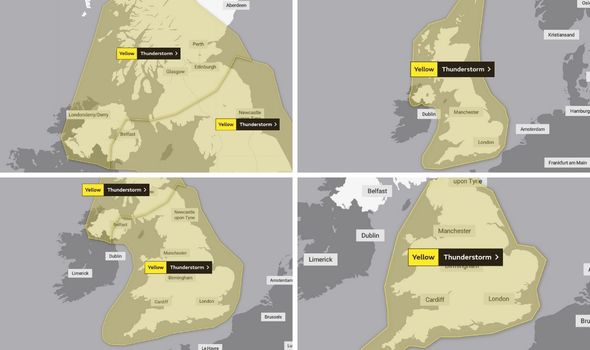 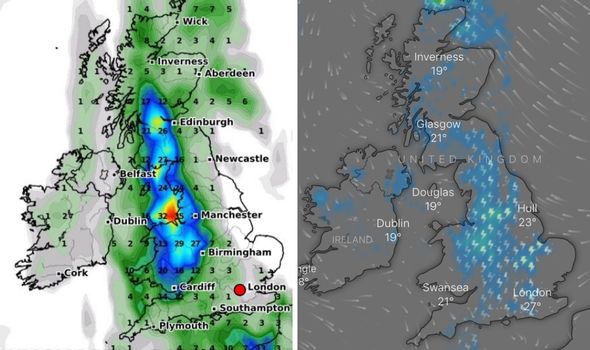 The third warning is in effect on Tuesday from midnight to 11.59pm covering all of the UK.

The fourth weather warning is in force on Wednesday again covering all of the UK from midnight to 11.59pm.

The final warning is in place across all of England and Wales on Thursday from midnight to 11.59pm.

The final warning reads: “Areas of thunderstorms are expected to develop over parts of England and Wales during Thursday.

“Some intense thunderstorms may occur, in some instances associated with torrential rain, large hail and frequent lightning, as well as strong gusty winds.

“Rainfall totals of 20mm to 30mm could fall in an hour, with some locations potentially receiving 40mm to 60mm in three hours, although these will be fairly isolated.”

The Met Office has however made it clear that “there is uncertainty in location and timing”.

However, regions hit by these intense storms may see homes and businesses flooded quickly, with damage to some buildings from floodwater, lightning strikes, hail or strong winds.

In addition, there is a small chance of fast flowing or deep floodwater causing danger to life.

Spray and sudden flooding could lead to difficult driving conditions and some road closures according to the forecaster. 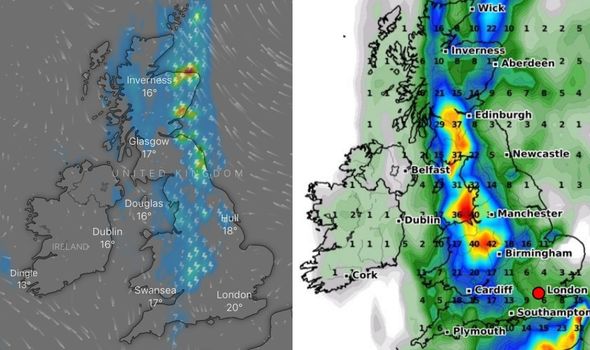 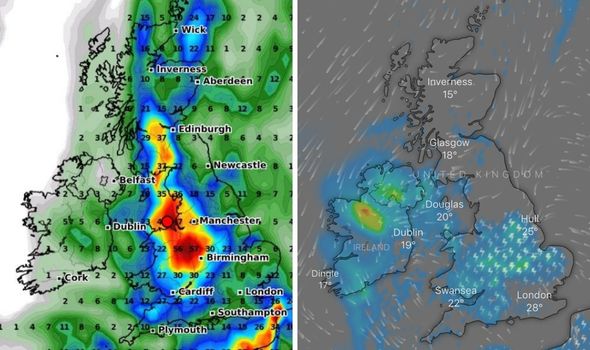 According to forecasters Windy.com and WX Charts, eastern parts of the Northern Ireland, Wales and south-west England will see most of the storms on Monday.

On Tuesday, the storms will likely reach many more regions of the UK according to forecasters.

Predominantly, central parts of England and Wales will likely see the heaviest rainfall amounts and most intense storms.

The heaviest rainfall is expected along eastern areas of England, Wales and south-eastern parts of Scotland.

By Wednesday, forecasters predict rainfall to impact most of the UK, with the heaviest rainfall amounts impacting Wales, northeastern and central parts of England and eastern parts of Scotland.

The forecasters predict the most severe storms to impact southern parts of England, Wales and Northern Ireland on Thursday.

MeteoGroup said: “Wednesday will start mostly sunny but thunderstorms are likely to develop in places during the afternoon, especially across central, southern and eastern England. Thursday will be mostly cloudy with frequent showers, many of which will be heavy and thundery. It will be less hot than previous days.”