The UK’s 2019/2020 storm season is almost at its end, but before the new season begins the UK is forecast to be pummelled by strong winds and heavy rain as another named storm hits the country. Storm Francis is predicted to hit the UK less than a week after the powerful Storm Ellen hit Ireland and parts of Britain. But what does the flooding forecast reveal about the next storm?

A strong Atlantic storm is pushing a windstorm into the UK and Ireland on Tuesday.

The broad wind field is due to hit bringing heavy rain and wind.

Storm Francis is due to impact parts of Ireland, the UK and the Netherlands on Tuesday where flooding is possible.

The frontal system moves across Wales and UK on Tuesday morning and continues towards the northeast.

Heavy rain with wind squalls will be associated with the surface front. 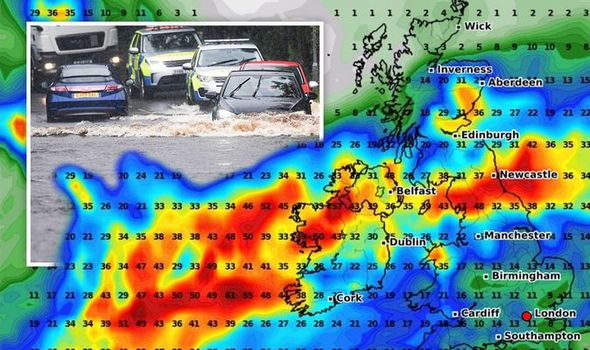 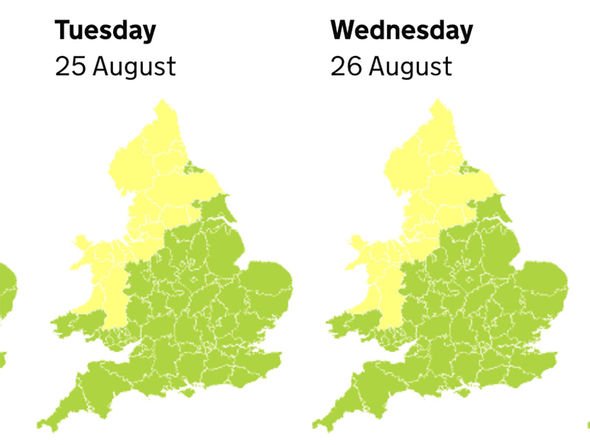 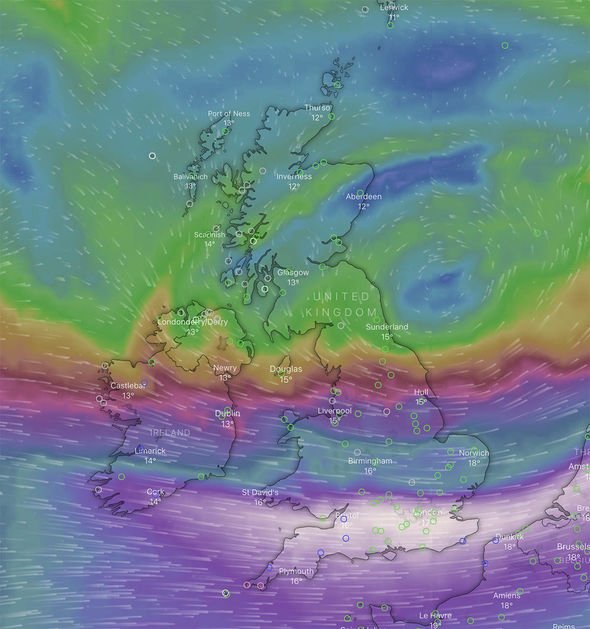 The Atlantic cyclone is forecast to hit the UK and bring strong winds, associated with the quite deep surface low.

The wind field will spread across western European from late on Monday into Tuesday and Wednesday.

A windstorm is possible over parts of Ireland, Wales and the UK on Tuesday.

Peak wind gusts could reach up to 75mph (120kmh) meaning there is potentially dangerous wind threat to some parts of the country. 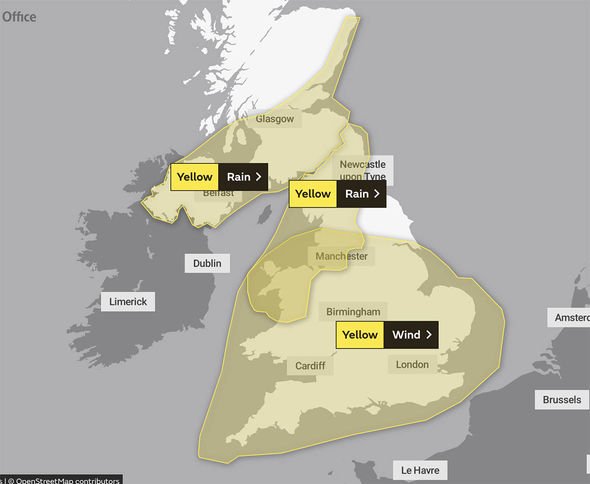 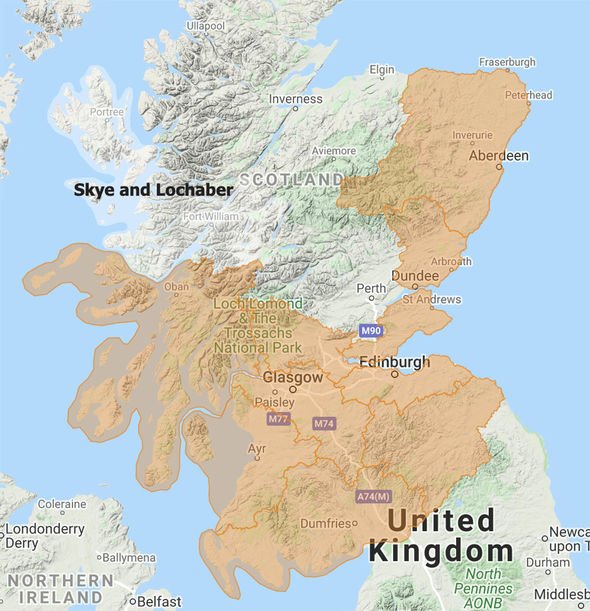 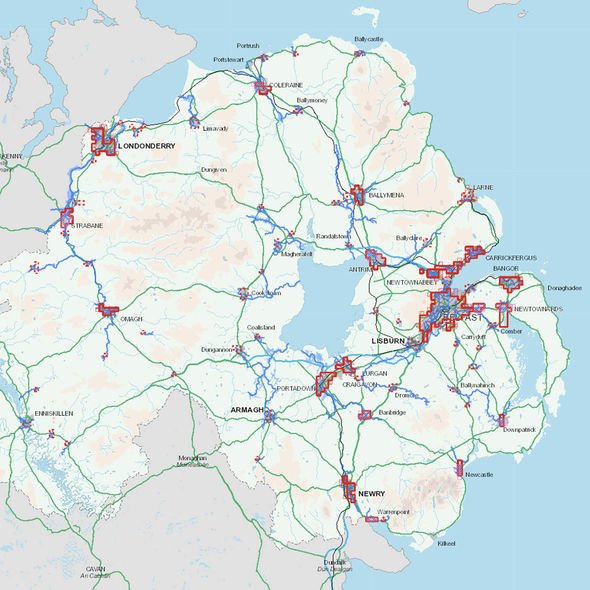 The Met Office has issued several severe weather warnings for the incoming storm.

The first is for wind which is due to batter the UK from 9am on Tuesday to 9am on Wednesday.

The warning advises that Francis could bring some very strong winds leading to travel and power supply disruption.

It is also possible there will be potential damage to trees.

Some areas of the UK could see wind gusts of up to 70mph in exposed coasts and hills, with winds of up to 60mph likely in more places.

The Met Office warning reads: “Whilst not exceptional, winds this strong are unusual for August and they will be accompanied by some heavy rain in places, with possible transport disruption and impacts on outdoor activities.”

The second yellow weather warning in effect on Tuesday is for rain which is in place from midnight on Tuesday to 6am on Wednesday.

This warning is in effect across parts of south-west Scotland and Northern Ireland.

The Met Office warning reads: “Storm Francis will bring another spell of very wet and windy weather during Tuesday and early Wednesday.

“Total rainfall accumulations are expected to reach 20mm to 40mm (0.8 to 1.6 inches) widely across the area with as much as 60mm to 90mm (2.4 to 3.5 inches) for parts of Northern Ireland and south-west Scotland, particularly over high ground.

“Strong east to north-easterly winds are also expected to develop, with gusts of 50mph affecting exposed coasts and hills.”

There is also a weather warning for rain advising of similar rainfall accumulations covering parts of northeast England, north-west England, Wales and Yorkshire and Humber. 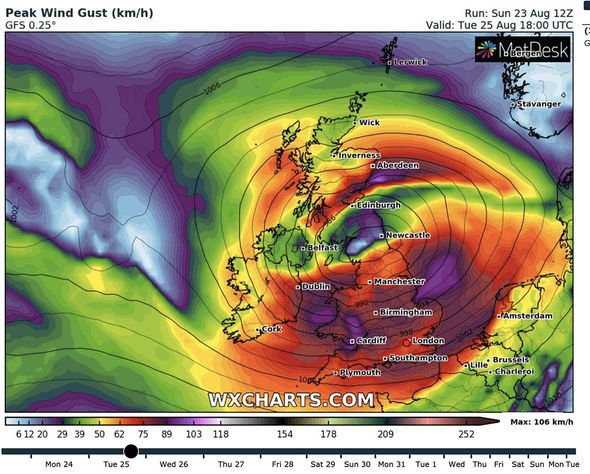 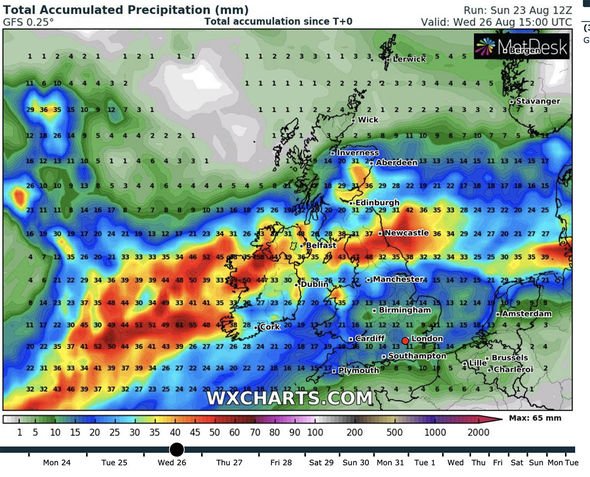 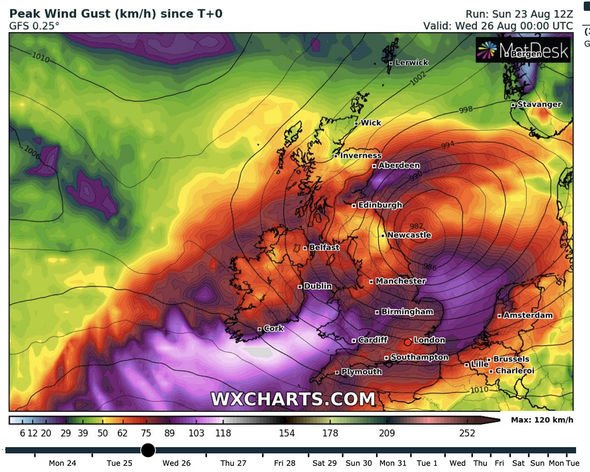 The cyclone’s path moving across Ireland, Northern Ireland and the UK is due to unleash heavy rainfall amounts.

This may lead to an enhanced flooding threat locally as the soil, especially across northern England, is already soaked.

Several parts of northwest England, north Wales are likely to see flooding on Tuesday and early Wednesday according to the Environment Agency.

Land, roads and some properties will flood and there will be travel disruption.

Local river flooding is also possible over Wales and parts of the west and north of England on Tuesday and Wednesday which is due to heavy and persistent rain from Storm Francis.

On Wednesday local minor coastal flooding is possible but is not expected along with parts of the north-east coast of England due to strong winds associated with storm Francis.

Minor surface water flooding is also possible but not expected on Thursday and Friday in parts of England and Wales and some land, roads and some properties may flood and there may be travel disruption.

Specifically, the following regions are predicted to be impacted.

In Scotland there are currently 10 flood alerts in effect across the following regions: