Jim Dale, senior meteorologist at British Weather Services, has thrown his weight behind the possibility of this summer’s second heatwave ending next Wednesday, August 17. Speaking exclusively to Express.co.uk, he said: “We are potentially looking at thunderstorms next Wednesday, the south is the favourite region. Likely sporadic, possibly intense but too far away to be certain of exactly where and when.”While the specifics behind his forecast cannot yet be obtained, the Met Office has loosely mentioned a “low risk” of thunder and lightning hitting the south from next week. In its long range forecast for the period, it says: “Into the weekend and through next week, mainly dry and settled weather will likely continue for most.

“The north is expected to see the most of any precipitation, but there is also a low risk of thunderstorms developing in the south.

“Temperatures will likely be very warm, locally hot for much of England and Wales, especially across the southern parts, but closer to normal while still warm elsewhere.”

The south is set to rake in some of the hottest temperatures this week – so it’s no surprise that a bout of thunderstorms may move in once the high pressure fades.

Nick Finnis, a senior forecaster for Net Weather also spoke about thunderstorms in his projections for the week. 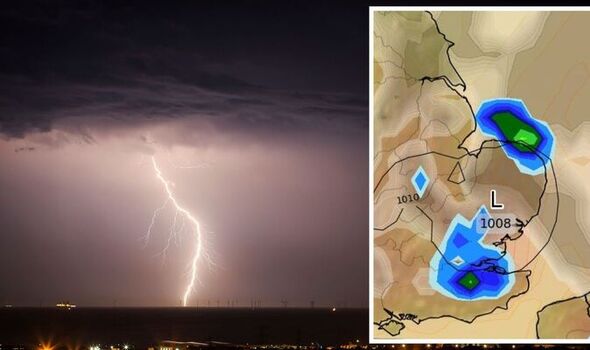 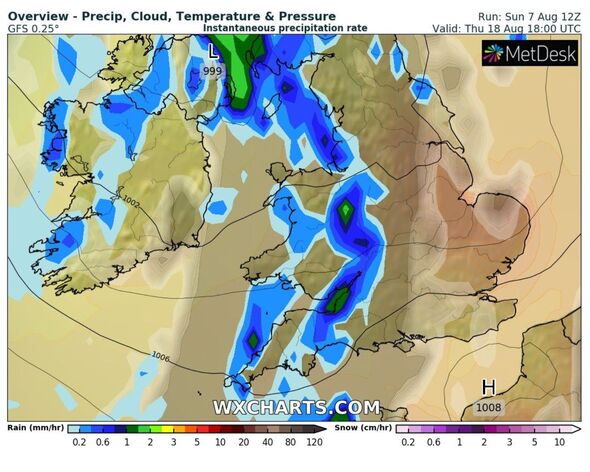 He said: “The models suggest heat looks to ease early next week, Tuesday onwards could see cooler Atlantic air spread down from the northwest.

“But other than some brief showers or thunderstorms possible during the breakdown early next week, there still looks to be little rain firmly on the horizon for southern, central and eastern areas that desperately need it.”

Thermometers this week are due to hit uncomfortable heights yet again, with 36C peaks being predicted for Heathrow Airport by at least Friday.

The country has been braced for another heatwave with a yellow heat health alert being issued for large parts of the country. 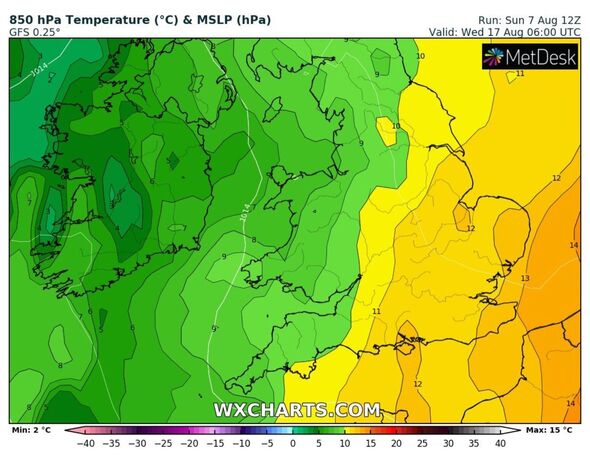 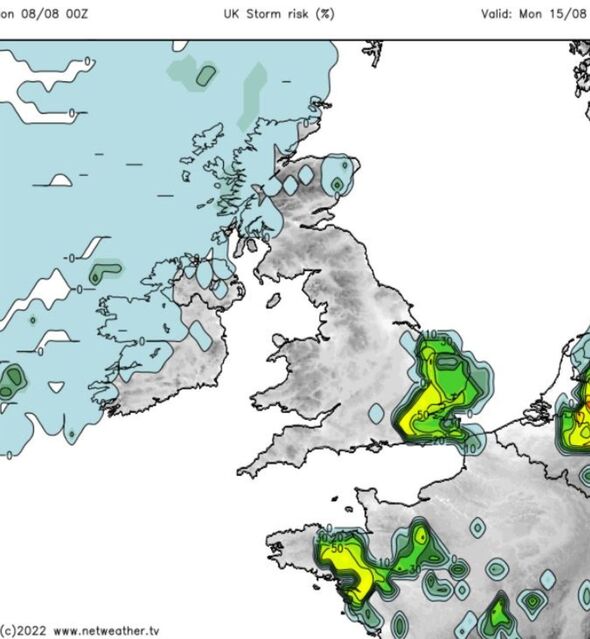 It urges people to be aware and ready for such temperatures, but experts have said it will be nothing like the 40.3C humidity felt last month on July 19.

Rebekah Sherwin, deputy chief meteorologist at the Met Office, explained why this is the case.

She said: “There is some uncertainty about this week’s temperatures, although in early August sunshine in the UK doesn’t have the heating potential of mid-July as the sun is lower in the sky and the hours of daylight are marginally shorter.

“Both of these factors suggest that we’re very unlikely to see temperatures peak much above low to mid 30s.

“However, this would still be a hot spell of weather.”

Thermometers will be set to peak by the end of this week, with pressure starting to build from today.

Forecasters have previously said this high pressure system has come from the Azores, but even last week parts of Europe also sweltered in yet another heatwave.