Met Office weather warnings for snow and snow and ice are in place across the UK over the coming days, with an area of rain heading northeastwards expected to turn to snow. The forecasters have issued a rare amber alert for snow into Thursday morning, with up to four inches likely in some areas.

Yet more wintry weather is due next week, with more snow and plunging temperatures this weekend.

Forecasters have warned of a possible return of the Beast from the East next week.

In March 2018 the so-called Beast from the East brought intense snowfall and winter blizzards to the UK.

Met Office forecaster Alex Burkill said there is “very much a possibility” of a Beast from the East number two in the “middle of next week”.

Read More: London snow forecast: Is it going to snow in London tomorrow? 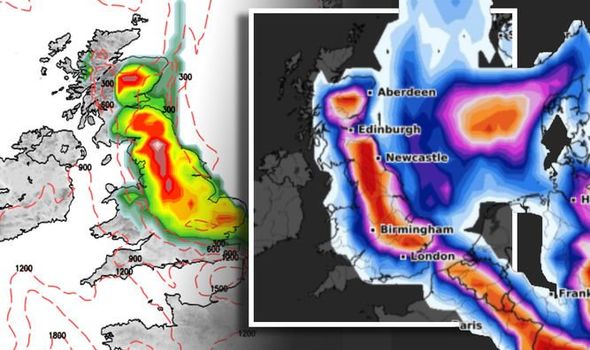 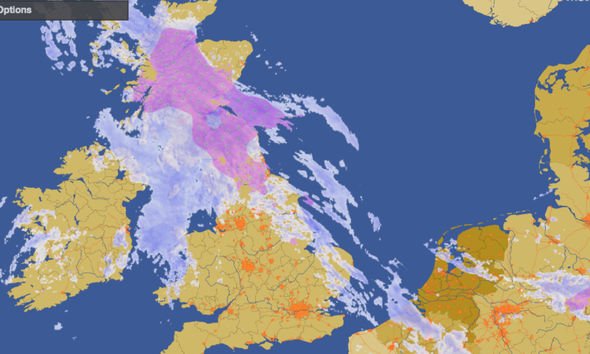 When will it snow?

Snow has been falling today across the UK, with pictures showing heavy snow across part of Scotland and the North of England.

Pictures show heavy snow across Scotland, following a weekend of ice and snowfall.

Two warring air masses are to blame for the sudden winter weather, with rain turning to snow across the UK. 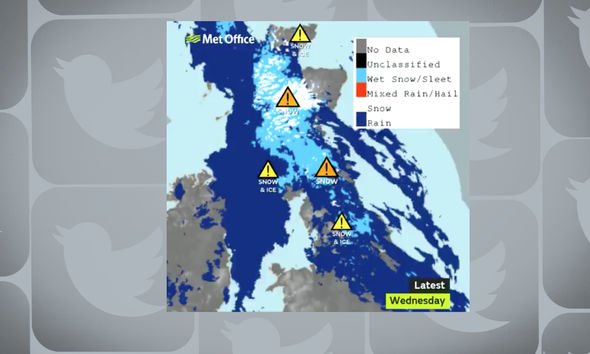 Met Office Chief Meteorologist, Paul Gundersen, said: “There is cold air from the north pushing down the east side of the UK and warm air moving in from the west.

“Where these two air masses meet a weather front is bringing some heavy rain which is turning to snow in places.”

The Met Office tweeted today: “Heavy snow is falling across parts of Scotland and over the hills in northern England.

“There are also reports of freezing rain giving #icy conditions in the far northeast of England.”

Mr Burkill said freezing rain is likely to turn to snow in parts of Scotland and north-east England overnight on Wednesday into Thursday morning.

He said: “Through Thursday itself there’ll be further rain across the bulk of the UK and this could bring some fairly significant snow a bit further southwards through Thursday.

“By Thursday afternoon we could be looking at snow across many parts of northern England and into the Midlands and perhaps a little bit further east as well.”

Live weather maps from meteoradar show snow across Scotland and the North of England at the time of writing. 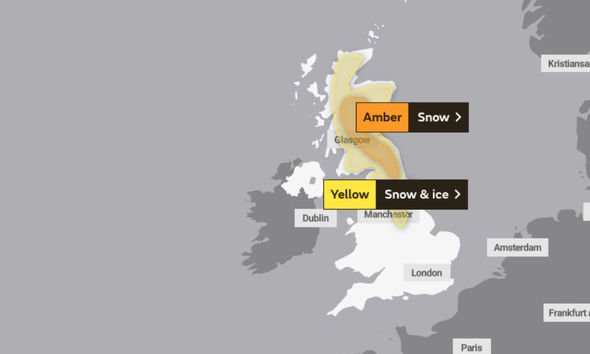 Netweather snow forecast maps show heavy snow across much of the country on Thursday.

One map, showing the weather at 6pm on Thursday, shows heavy snow across the east of England, Scotland and into Wales.

Met Office warnings for snow are in place until 9pm on Thursday, with forecasters warning: “Heavier snowfall is more likely above 100 m in Scotland and above 200 m in England, where five to 10 cm (1.9 to 3.9 inches) of snow may accumulate, possibly 20cm (7.8 inches) on highest routes.

“At lower levels, two to five cm of snow may accumulate in places, but the situation remains finely balanced, with the possibility that most lower-lying areas in northern England see rain or sleet rather than snow.”

A further amber weather warning for snow is in place until 10am on Thursday, with the Met Office warning disruption is likely across the warning area.