A snow system has been spotted on the latest weather charts, with much of the country at risk of snowfall from Friday January 22. The system is poised to sweep south from Scotland to the rest of the UK from Friday evening into the weekend, according to weather maps tracking its movements. This weather front will be the second to hit the country in days, as the Britain is currently grappling with heavy snow, sleet and ice.

Up to 11cm of snow fell in the Perth and Kinross area overnight, with 5cm recorded in Cumbria by 9am.

A map valid from 3pm shows the system will engulf parts of northern Scotland with a 100 percent snow risk, while flurries of snow are also expected across Wales and the Midlands.

By 9pm the weather system will have moved further south, affecting the east of Wales, the Midlands and East Anglia.

Parts of central England have a 100 percent snow risk, as shown by the white circle, whereas the rest of the UK has between a 35 to 90 percent risk of snow. 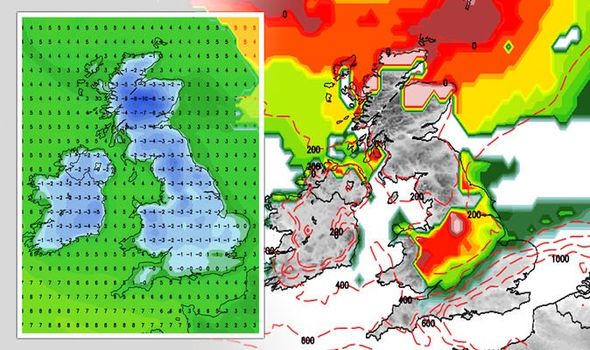 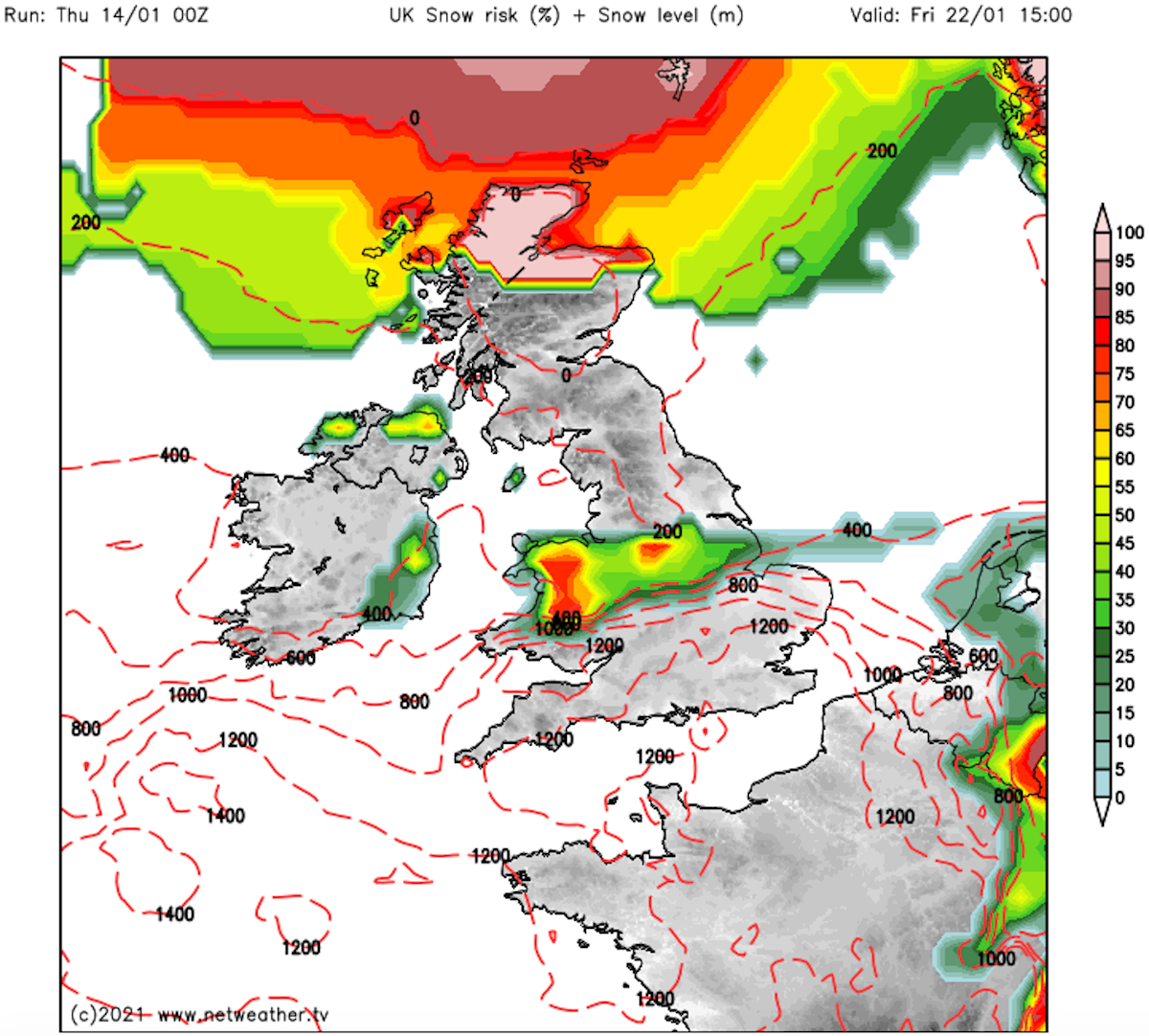 The north of Scotland will continue to be engulfed in the system, covered by a 100 percent snow risk, according to the chart.

As midnight hits, the weather front appears to move further south still, covering much of England.

The dark red area indicates between a 75-85 percent snow risk, while the yellows and green on the map indicating a more moderate risk of snow between 30 to 70 percent.

By 6am on Saturday January 23, the risk of snow increases further, with large parts of England covered in white and red. 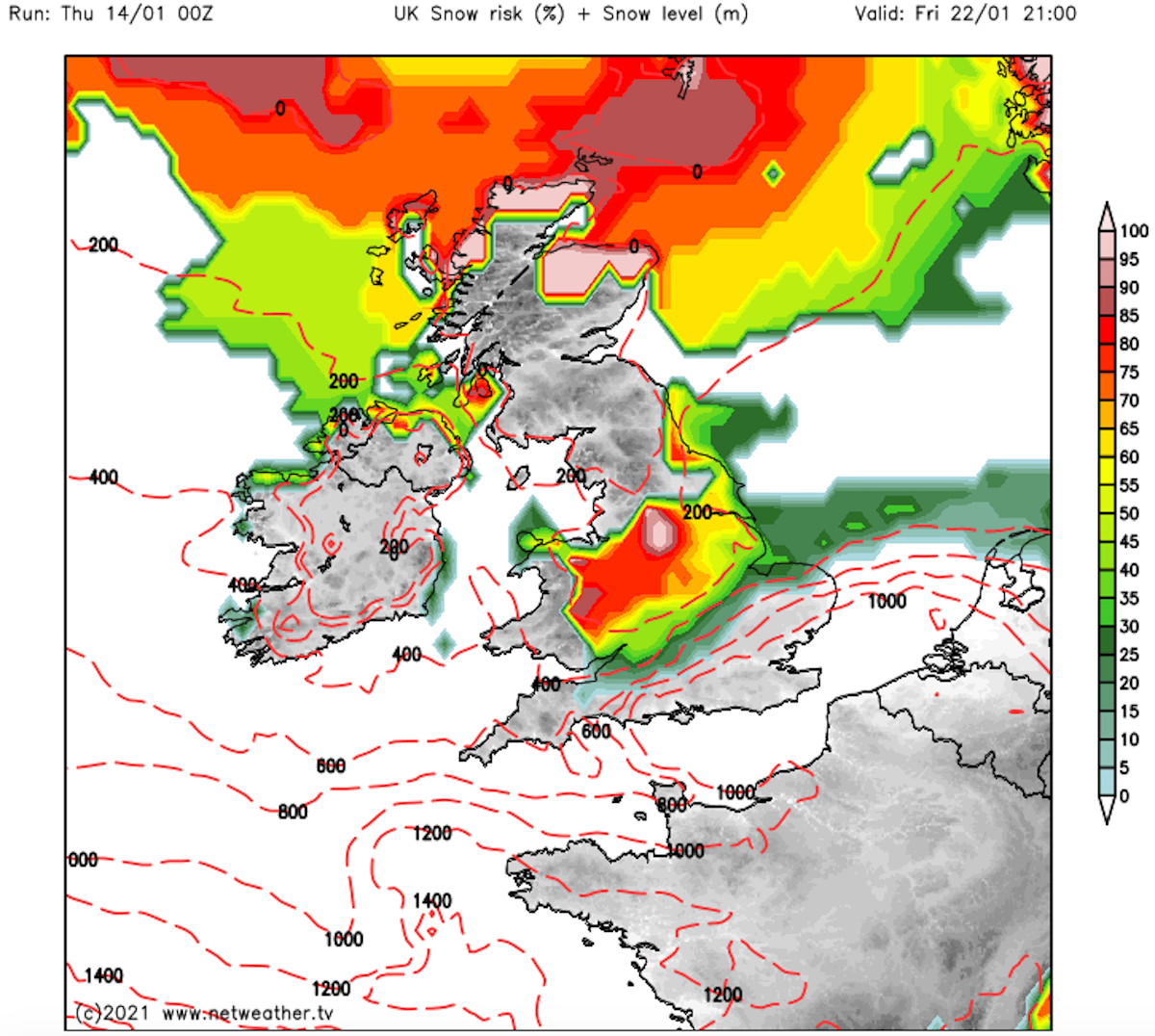 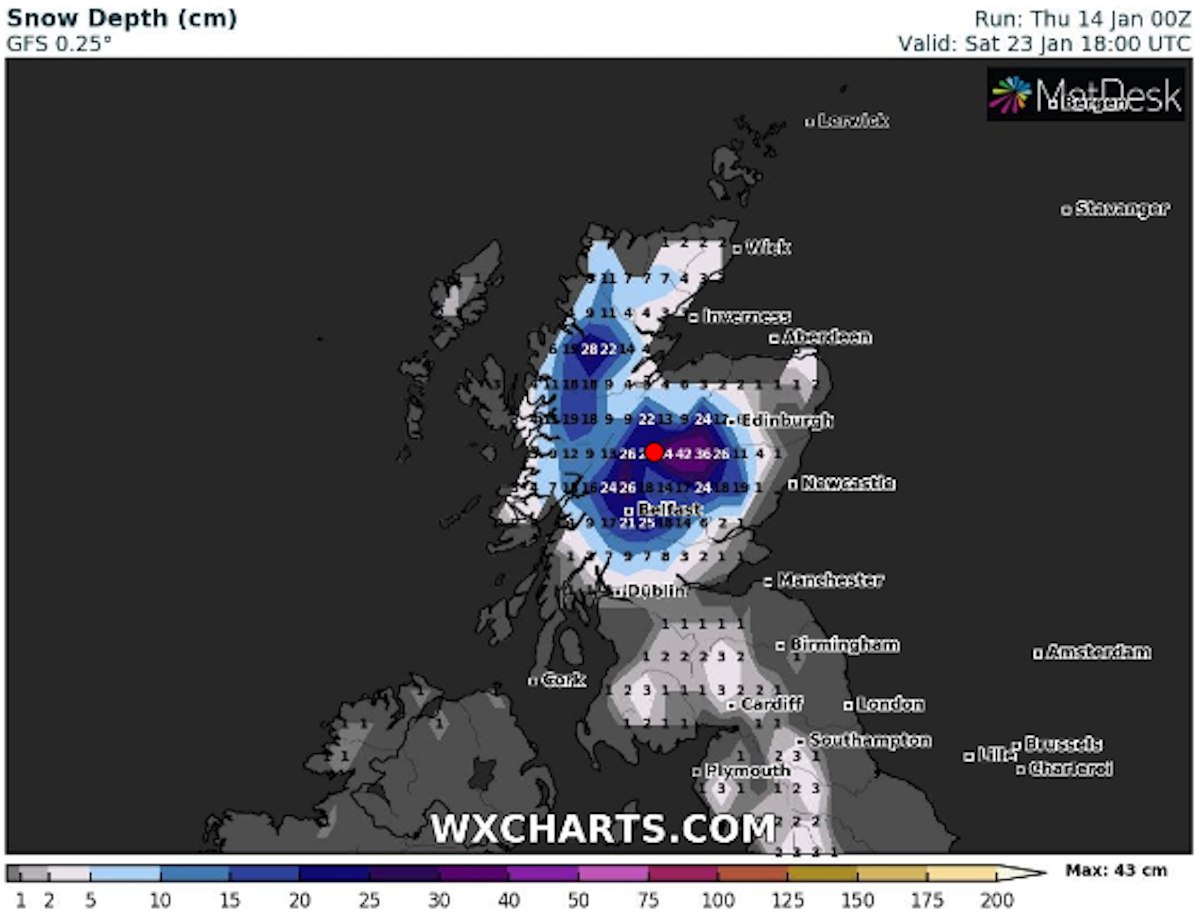 But by the evening the chance of snow flurries moves away from the south of England, with only Scotland and the north of England covered by a high risk of snow.

This pattern repeats over the weekend as the weather system continues to move south.

A second map by WXCharts also shows the weather front appearing above Scotland on January 22, before edging further south.

The forecasters expect the system to cause heavy snowfall in the Scottish Highlands by 6pm on Saturday January 23, with up to 16.5 inches (42cm) expected. 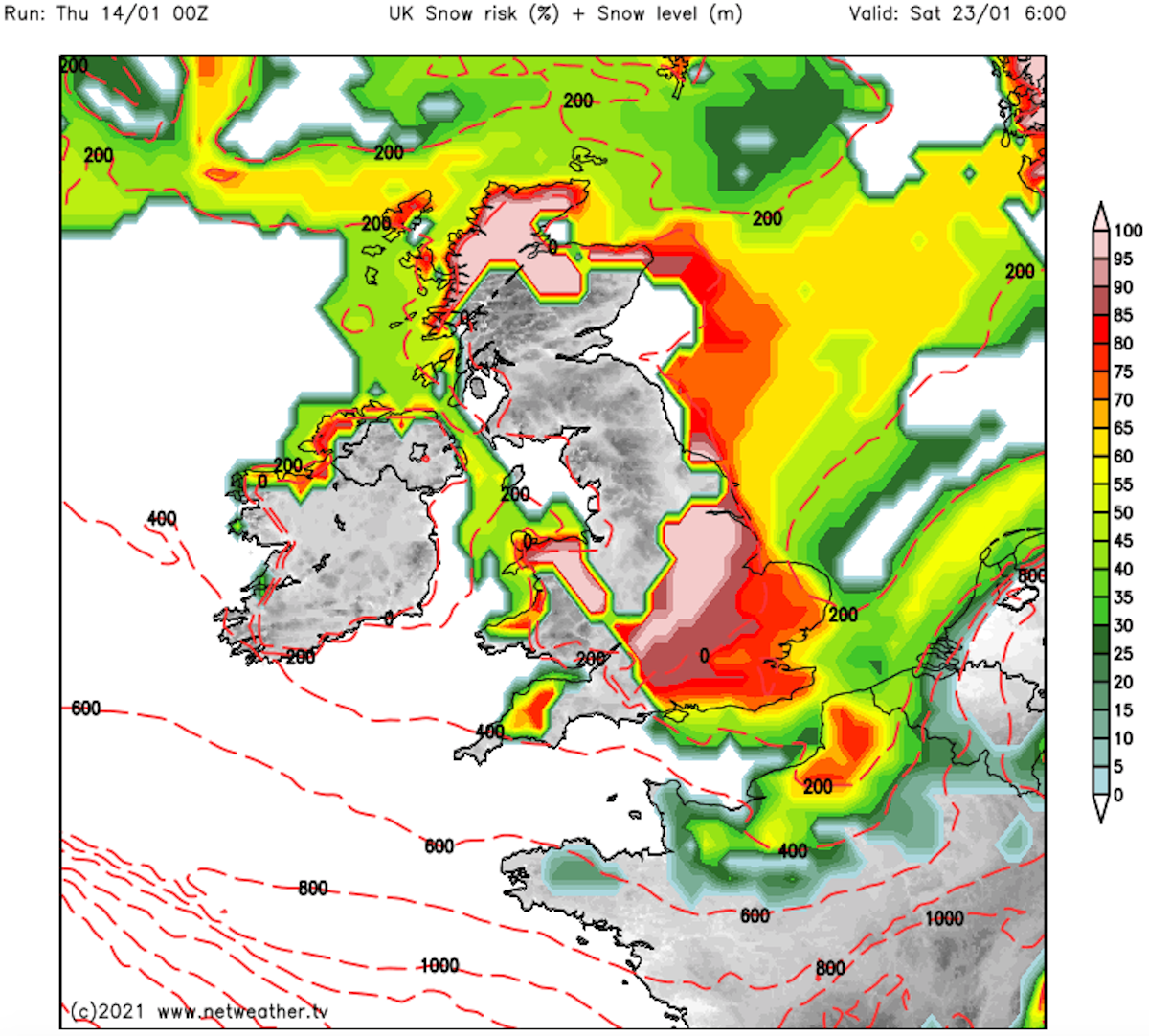 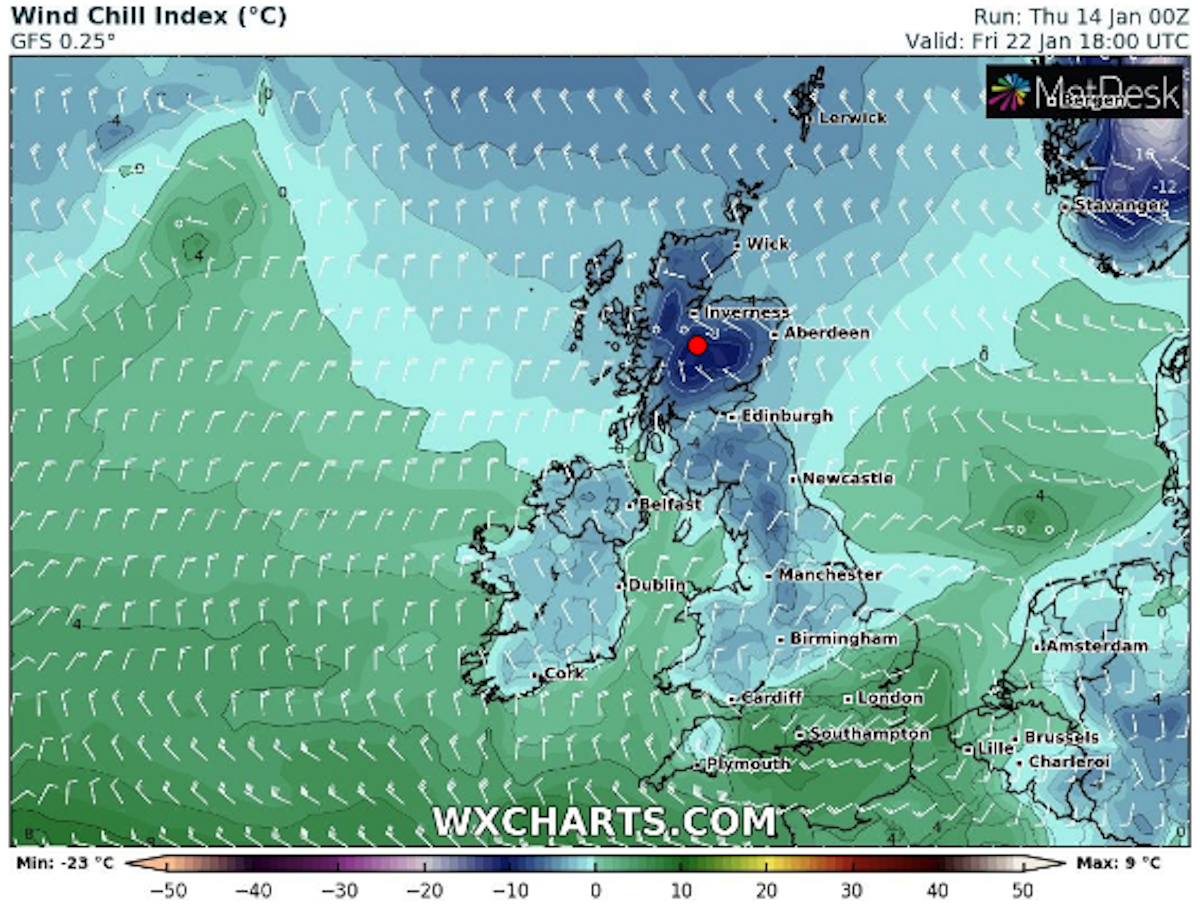 As well as causing snow flurries across the UK, the weather system is expected to prompt the mercury to plummet.

Several charts from Netweather show temperatures could fall to as low as -10C in Scotland, while the north is poised for -5C and further south is expected to see the mercury dip just below freezing.

The Met Office has said a north-easterly flow is expected to bring unsettled conditions from the mid-end of the month.

They said: “A north-easterly flow will bring cold conditions and possibly frequent showers, particularly to the northern windward coasts, which may fall as snow over high ground and sometimes down to lower levels. 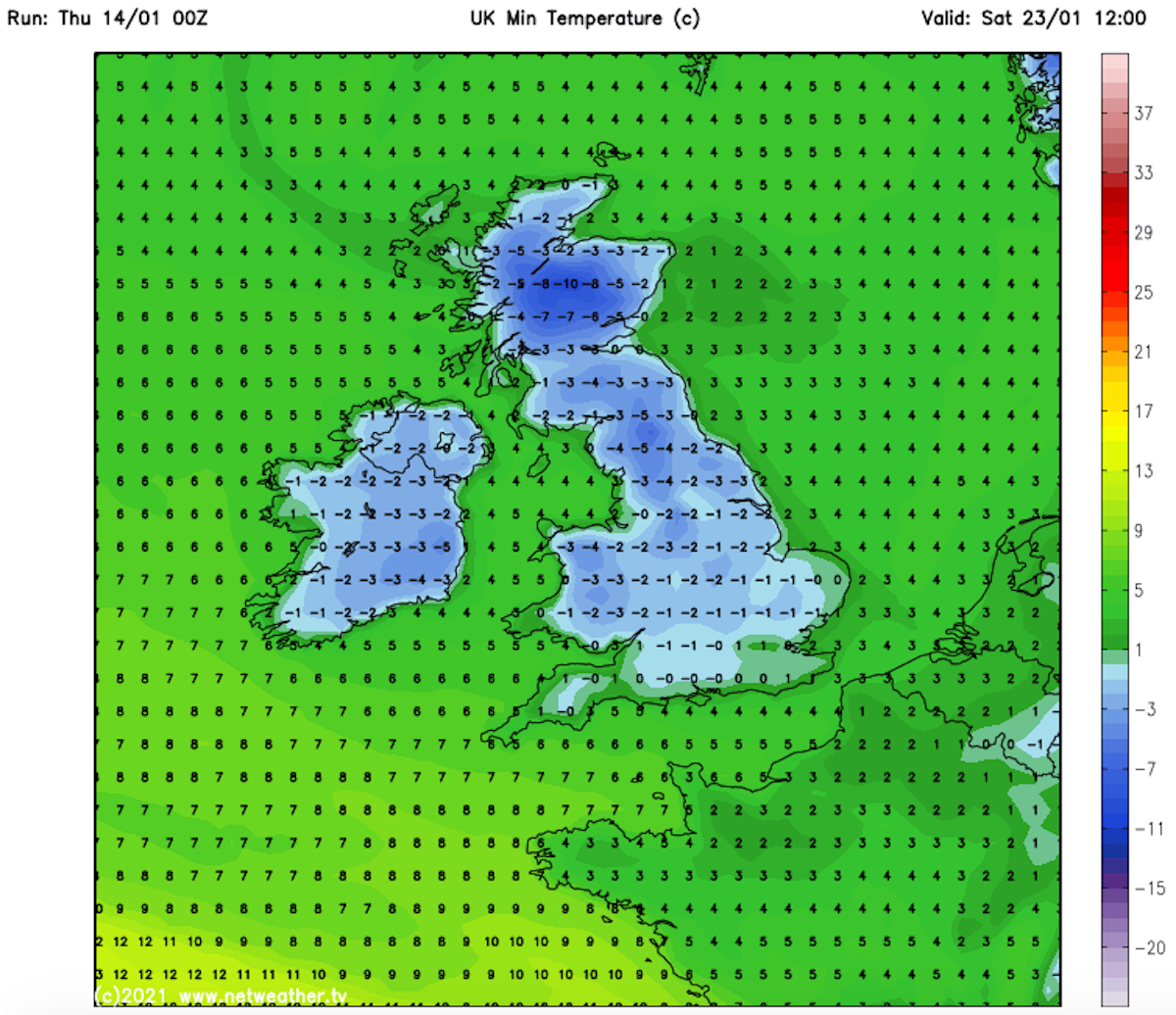 “Towards the end of the period conditions are likely to remain colder than average in the north, with the south likely to see more unsettled conditions and slightly above average temperatures at times.

“These conditions would likely bring periods of above-average precipitation to the UK, with a likelihood of more organised snowfall for northern areas, and rain in southern areas.”

Brian Gaze at the Weather Outlook said the changeable weather conditions will continue next week.

He said: “In the north there is a chance of heavy periods of sleet or snow at times, especially over high ground.

“The north will often be cold. There is more uncertainty about temperatures in the south with a greater chance of close to average or mild days.”