There may be a few days of sunshine this week following a freezing Easter Bank Holiday weekend. However, the brief warm spell will be short-lived as northerly winds are expected to bring widespread heavy snow by Friday. The latest snow probability charts from WXCHARTS shows different shades of red, orange, purple and dark blue sweeping across the whole of the UK from the Arctic region on Friday and Saturday.

This suggests there is between 45 to 100 percent chance of snow hitting everywhere in the UK.

Brian Gaze, a forecaster at Weather Outlook, warned of snow hitting southern regions of the UK this weekend.

He wrote on Twitter: “GFS 12z shows snow cover extending down to parts of the south this weekend.

“Snow depth charts are often wide of the mark in the UK but it is something to keep an eye on as we head through the week.” 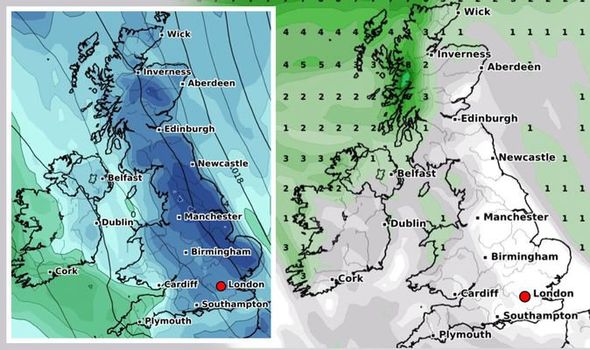 Temperatures could plunge in Scotland to -7C on Sunday, with central Wales seeing -6C and Cumbria in the north west of England seeing -4C.

South eastern regions of England including Kent and London could also see single figures of 1C on the same day.

Mr Gaze added the bitter Arctic air could bring wintry conditions are expected to return on Friday after a brief sunny period over the next few days.

He said: “Another Arctic blast is expected to sweep southwards again during Friday, with the risk of snow and sharp frosts returning to much of the country this weekend. 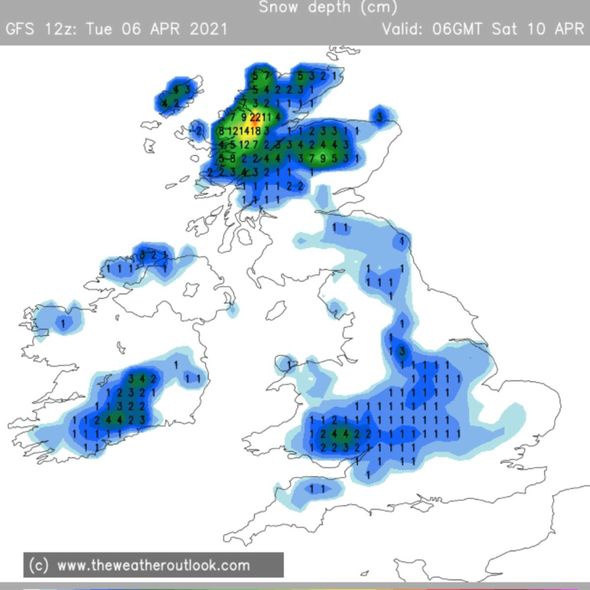 “Wednesday begins very cold with temperatures below freezing point in much of the UK. There are wintry showers in the north and around coastal counties.

“Through the day they fade away and many areas have sunny periods. Cloudier skies push into parts of the north west and outbreaks of rain develop in Northern Ireland. It remains cold for the time of year, but winds will be lighter than in recent days.

“Maximum temperatures range from 3C (37F) in northern Scotland to 9C (48F) in the south. See the rain radar for the latest view.

“Through Friday patchy spells of rain move down into southern counties and they could turn to sleet or snow on their back edge. To the north very cold Arctic air returns and showers increasingly fall as snow to low levels. 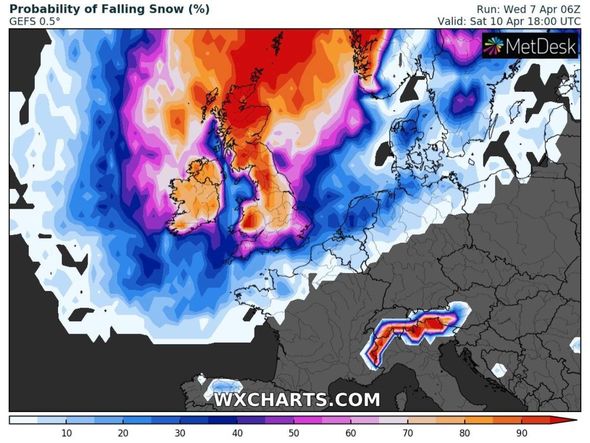 “Current guidance is suggesting a cold weekend. Sleet or snow showers may be widespread and heavy on Saturday in central and northern areas. In the south there could be longer spells of rain, sleet and snow.

“Sunday perhaps brings outbreaks of rain, sleet and snow to Scotland. Elsewhere showers fade away to leave dry conditions. There is the potential for sharp or even severe nighttime frosts.

“Early next week temperatures are expected to gradually edge upwards. There should be a good deal of dry weather but showers or longer spells of rain are possible and in the north it could be cold enough for snow. The risk of frost continues.” 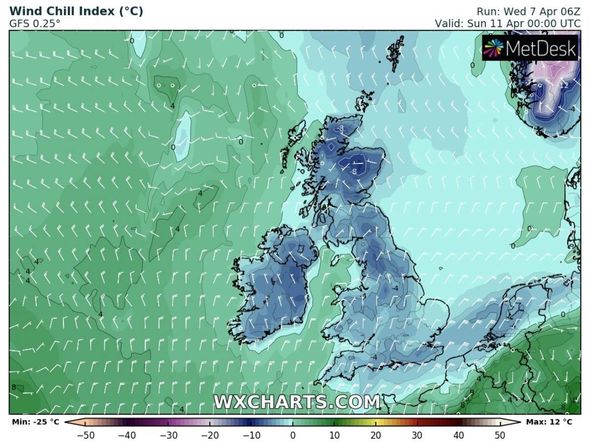 The forecast said: “Our computer models are heavily suggesting a trough of low pressure will extend from Scandinavia.

“This will help a deep low pressure system develop around Easter Monday and linger for much of the week, keeping it unsettled and windy but also keeping the colder air in place.

“The combination of colder air and unsettled weather from fronts means there is a risk of some lowland snow, which may be heavy in places.

“Pinning down the location of the fronts is, unfortunately, not possible at this range, but we have higher confidence that it will tend to be unsettled rather than dry.” 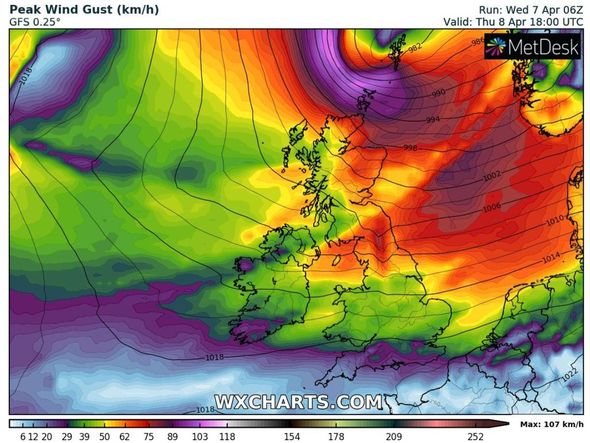 Met Office spokesman Oli Claydon said snow in western parts of Scotland will move into rain tonight before a slightly milder pool of air moves in.

He added the milder air will soon disappear as another cold front moves across the country “bringing another pool of Arctic air through Friday and into the weekend”.

Mr Claydon said: “There will be less showers around, the showers starting to ease from the west through Wednesday, so a drier day for many.” 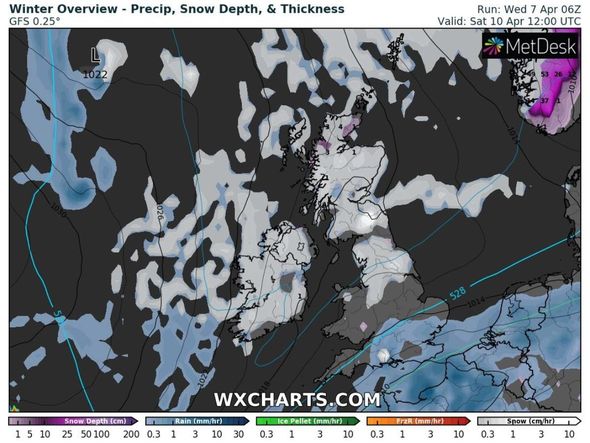 The forecast between Sunday, April 11 and Tuesday, April 20, said: “Changeable conditions are expected for most areas early in this period. A mixture of sunny spells and showers for most parts of the country.

“The west and northwest have the greatest chance of seeing any spells of more prolonged rain and stronger winds.

“Temperatures likely still below average at first, slowly recovering back to closer to average.

“Confidence becomes low in the prevailing weather patterns during mid-April. There are most likely to be further spells of unsettled weather with some showers or longer spells of rain crossing all parts of the UK.

“This will be interspersed with drier and brighter interludes. Temperatures are expected to be at or slightly below average for this time of year by the end of the period.”