A bitterly cold front from the Arctic is predicted to bring a fresh cold spell this week following a wintry Easter Bank Holiday weekend. Northerly winds are expected to sweep wintry conditions down the UK towards London and Kent by Saturday, according to WXCHARTS. The latest snow probability charts show the whole of Britain covered by shades of red, orange, purple and dark blue on the same day, suggesting there is between 40 to 100 percent chance of snow hitting everywhere.

Brian Gaze, a forecaster a Weather Outlook, wrote on Twitter: “GFS 06z hinting (and that’s all it is at this range) at the possibility of a more prolonged period of snow in southern/central Britain this Saturday.”

Mr Gaze explained the whole of this week is expected to turn cold due to an Arctic air stream, with wintry showers becoming widespread by Saturday.

He said: “Tuesday begins very cold with temperatures below freezing point in much of the UK.

“There are wintry showers in the north and around coastal counties. Through the day they become widespread and even inland parts of southern and central Britain are likely to catch a few. 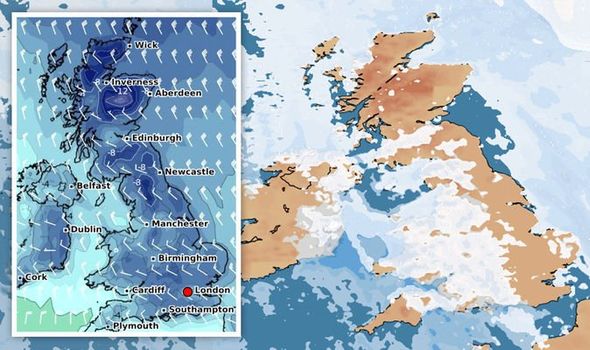 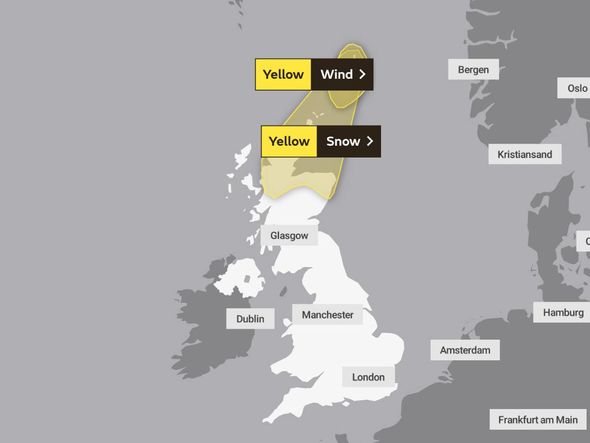 “Further accumulations of snow are possible over high ground in the north. A blustery northerly wind makes it feel bitterly cold.

“Tomorrow morning there could a few wintry showers around but it should be mainly dry. Through the day patchy outbreaks of rain push across Northern Ireland into Wales and western England. Over high ground they could fall as sleet or snow.

“During Thursday outbreaks of rain push southeastwards across the northern half of the UK. Over high ground there could be some sleet or snow. Southern and central regions have a dry day and temperatures should be higher than recently. 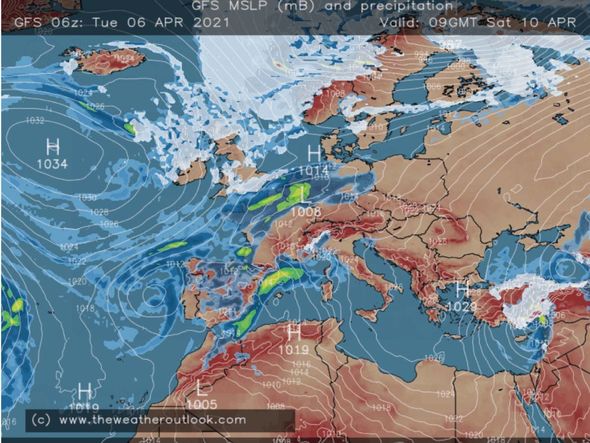 “Through Friday patchy spells of rain move down into southern counties. To their north very cold Arctic air returns and showers become increasingly wintry with snow falling to low levels in Scotland.

“Current guidance is suggesting a cold weekend. Wintry showers could be widespread on Saturday. Sunday may bring the risk of more prolonged outbreaks of rain, sleet and snow to Scotland.”

Temperatures could also plummet to -7C in Scotland on Saturday, while northern regions including Cumbria, Manchester and Leeds see -4C.

In the south east of England, including London, Luton and Dover, temperatures may be slightly warmer at 1C. 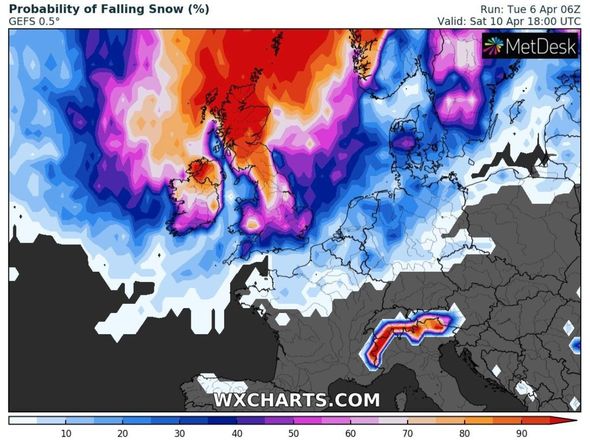 He said: “Through the afternoon we might even get a few homegrown showers, so really anywhere tomorrow could catch a wintry shower by the time we get to the end of the afternoon.

“Nobody is entirely immune to the odd bit of sleet or snow. It won’t last long and it won’t settle for very long either, but nobody is going to be 100 percent safe from not seeing anything.”

Snow warnings from the Met Office are also in place for northern Scotland until 10am, with as much as 2cm falling in higher areas. 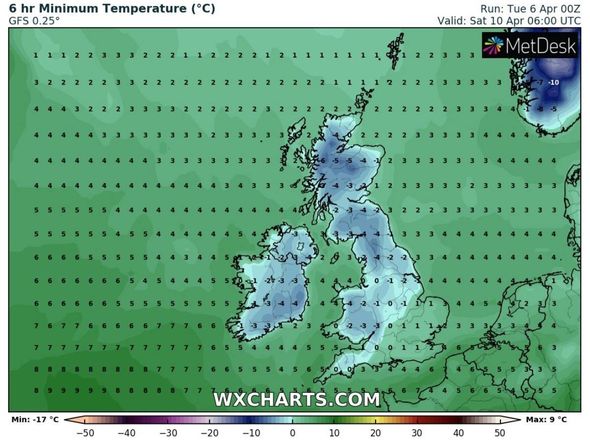 A separate yellow warning for snow and ice is also in place for west Wales and Northern Ireland until 10am, with up to 4cm expected to fall.

The yellow warning for snow remains in place tomorrow in northern Scotland.

The warning stated: “The cold northerly airflow will bring further snow and hail showers across much of northern Scotland.

“Snow amounts of around 1-3cm are likely at all levels and in addition, strong winds will lead to some drifting. Showers will become both lighter and less frequent through Wednesday morning.”

The BBC’s long-range forecast between Monday, April 5, and Sunday, April 11, warned of heavy snow falling in some regions, with the cold air likely to linger towards the end of the month. 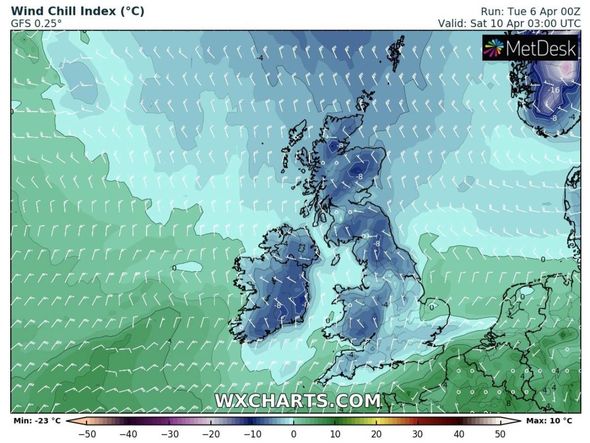 The forecast said: “Lower pressure is more likely to be the main weather feature for early April, bringing unsettled weather and a risk of lowland snow for some.

“High pressure will tend to be influential around the middle of the month and keep things settled and slightly colder than normal. More unsettled conditions are possible towards the end of the month.

“The combination of colder air and unsettled weather from fronts means there is a risk of some lowland snow, which may be heavy in places.

“Pinning down the location of the fronts is, unfortunately, not possible at this range, but we have higher confidence that it will tend to be unsettled rather than dry.”