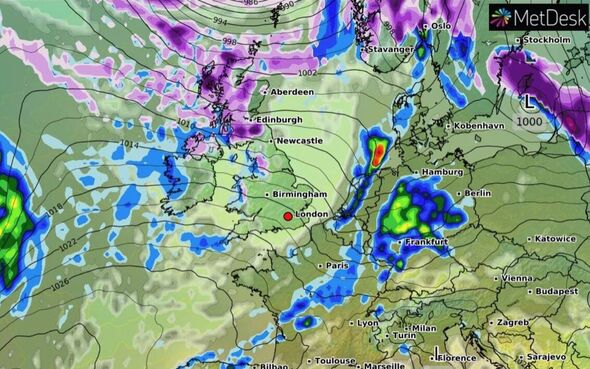 The weather is about to make a dramatic U-turn as a freezing blast from the Arctic smashes into mild air over the UK. The collision will fire up the jet stream unleashing a post-Christmas nightmare with northern Britain in the firing line for the worst of the assault.

Rain will turn to snow as government forecasters extend severe weather warnings across the region.

Met Office meteorologist Jonathan Vautrey said: “Showers pushing into the northwest could turn wintry, so there is a snow and ice warning across the upland areas of Scotland as we head into Boxing Day.

“Temperatures will be a touch down compared to recent day as colder air spreads across all areas of the UK.

“It will be a fairly breezy day for all of us, but the strongest winds are likely across the Northern Isles with an area of gales severe at times pushing across Shetland and Orkney.

“This could cause some disruption through the day, so if you are heading out on the hills, then do take care for any Boxing Day walks.”

After a mild start to the festive season, temperatures will plunge in bitter northerly winds, he added.

He said: “Temperatures will be dropping off a lot more on Boxing Day compared to the start of Christmas Day.

“It will be closer to average across southern England but turning a bit colder across areas of Scotland.”

Weather models reveal a deep low-pressure system to the north of Britain today whipping a band of rain and snow across the country.

North-western regions are most at risk of wintry downpours although southern Britain is not off the hook for a flurry.

Met Office meteorologist Alex Deakin said: “Colder air will be in place by Boxing Day, and if weather fronts to the south clash with the colder air, they could bring some snow in places.

“Sleet and snow will be most likely across the northwest, but there is just a hint possibly across the south so something to keep an eye on for Boxing Day.”

Britain’s weather through the coming days will ‘ebb and flow’ between cold and unsettled and mild and settled.

Temperatures overnight will dip to minus figures in the north while hovering close to freezing elsewhere.

Daytime highs will struggle to get much above low single figures across southern England while Scotland shivers between zero and -3C.

Jim Dale, meteorologist for British Weather Services, said: “The next few days will see the weather ebb and flow, staying largely cold but with some mild interludes.

“There is a chance that we could see some windy periods between Christmas and New Year, and behind the low-pressure systems responsible for this will be cold air.

“Temperatures will be highest in the south, with Scotland and the north seeing the coldest conditions.”

Heavy snow in parts today could spread to central and southern regions, according to some independent forecasters.

Exacta Weather’s James Madden said: ‘During the early hours of Boxing Day and through the day, an area of heavy snow could develop across central and southern regions.

“This could deliver several hours of heavy snow across the southern half of the country, and confidence is currently moderate to high that this could have an impact.”