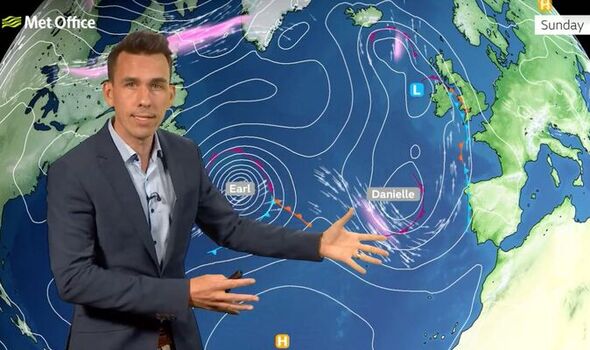 The remains of Hurricane Danielle will descend on the UK after the weekend before ex-Hurricane Earl arrives hot on her heels  ahead of mid-week. Both threaten a five-day forecasting nightmare for meteorologists, as volatile air masses play havoc with computer models. 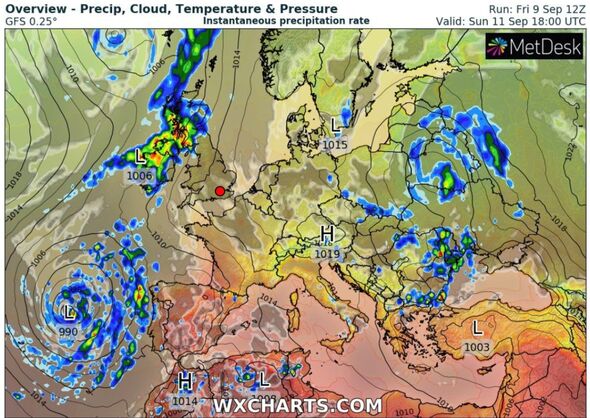 They will inject huge amounts of tropical energy into the atmosphere supercharging other storm systems as they sweep the UK.

After a brief respite from torrential downpours today, the Atlantic hurricane season will fire into action tomorrow as the heavens open, according to the Met Office.

“Hurricane Danielle and Hurricane Earl will have some influence on the UK weather over the next week or so.

“Sunday starts dry in most places with some sunshine, but there is some heavy rain turning up in the west in the afternoon and the breeze picks up by this stage.

“There is some uncertainty about the rain as it moves into the southwest later on Sunday and that is because of ex-Hurricane Danielle.”

The remains of Danielle will hitch a ride on the jet stream before joining forces with a separate Atlantic cyclone system, he said. 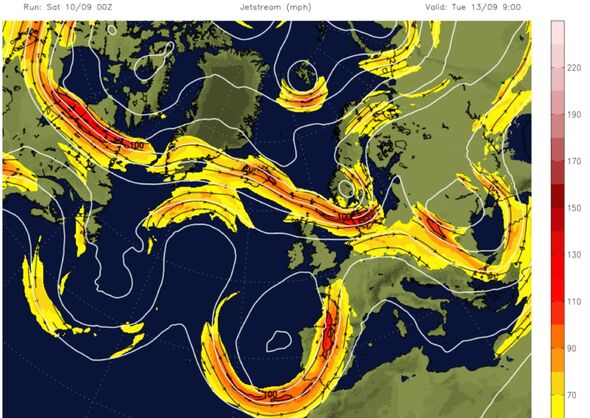 The remains of Hurricane Earl will follow in hot pursuit, triggering further downpours across Britain through the start of next week, he added.

He said: “The two hurricanes, the jet stream and the other areas of low pressure will all interact in relatively complex ways, but it does look like there will be some heavy rain as these fronts cross the country.

“That rain is being fed by tropical moisture, so there’s a lot of warmth and humidity tied up in the system wrapped around Danielle.

“There could be some soggy weather on Sunday into the start of next week and some heavy rain elsewhere as it crosses the country.”

Although the Met Office earlier this year predicted an active 2022 Atlantic hurricane season, it has so far been unusually quiet.

But the storm system is about to get going, according to some forecasters, with Danielle and Earl kick-starting an autumn assault.

Exacta Weather’s James Madden said: “The start of September will see a more changeable theme to the weather.”

“There is likely to be a significant rise in the risk of stormy weather as we go through the next couple of months.

“Storms could bring some strong winds during this period, and the risk of storm damage.”

Hurricane Danielle will go through an ‘extra-tropical transition’ this weekend, fizzling into a standard area of low-pressure.

It will be pushed southwards towards France and Portugal by another cyclonic weather feature swirling off the coast of Britain.

This will bring outbreaks of heavy rain across the UK through the start of the week before ex-Hurricane Earl takes over.

Meteorologists have been tearing their hair over how the two tropical troublemakers will affect the weather.

Weathertrending’s John Hammond said: “Weather charts for mid-month have been all over the place in recent days.

“Hurricane Danielle has been leading us a merry dance in the mid-Atlantic, and If Danielle wasn’t bad enough, Hurricane Earl is spinning up to be an intense storm further west.

“While neither will directly affect us, the ripples they make in the atmosphere will be important.”

Temperatures after the weekend will rise as tropical air is swept into southern and eastern Britain, he said.

However, Earl will drive a ‘dome’ of high pressure to send the mercury back into freefall, he added.

He said: “The remnants of Danielle will push a pulse of late-summer warmth up at the beginning of next week across southern and eastern areas of the UK.

“Then, as Earl arrives off the coast of Newfoundland, it will build a dome of high pressure across the mid-Atlantic, helping to usher cooler air down from the north.”