The mercury is forecast to reach 30C in London, before also hitting 22C in Cardiff, 18C in Belfast and 17C in Edinburgh today. The hot weather could be broken up briefly by thunderstorms this week, but the dry conditions should soon return by the start of next week and linger until July. Met Office forecaster Simon Partridge said there is a “reasonable chance” today’s warmest temperature could beat the previous record set on Monday, when temperatures soared to 29.7C in Teddington, Middlesex.

He said: “It’s going to be pretty close and there’s a reasonable chance that we will just pip it.

“There’s a good chance that we could see 30C temperatures just north of London and a small chance of seeing 31C (87.8F).

“The heat will be very much concentrated in the south-east corner of the UK, with a cold front across more northern areas.

“As well as being very hot it will become increasingly humid, so it’s going to feel really quite sticky and muggy by the early evening.” 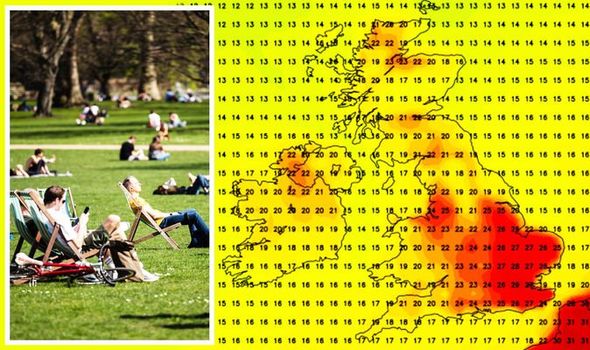 The latest heat charts from Netweather show highs of 21C returning in Kent and Essex, in the south-east, on Sunday, June 20.

A sweltering 24C temperature is set for London and Kent on Friday, June 25, while Essex and Portsmouth bask in 22C.

The last week of June could be even hotter, with the heat charts showing 27C arriving in London, Essex and Kent.

Bristol, Hertfordshire and Brighton could see 25C and Manchester, Leeds and Newcastle in the north could also bake in 22C on the same day. 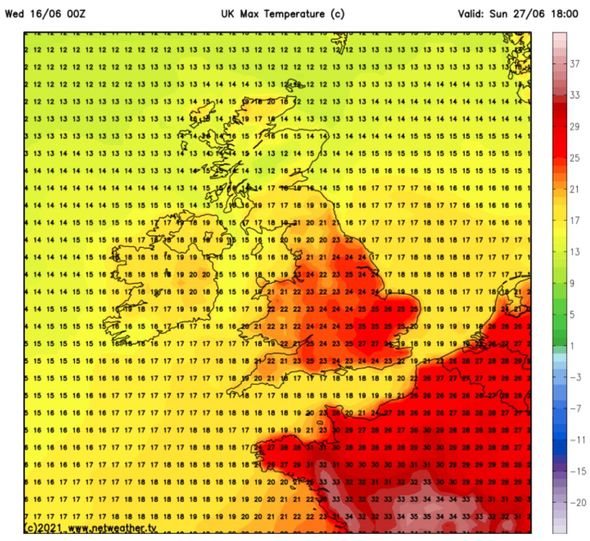 Blistering hot highs of 29C could return in Kent on Monday June 28.

And on Thursday, July 1, Kent could then bask in 24C, while Yorkshire is hit with 22C.

The Met Office’s forecast for the rest of June added “very warm conditions” could stick around until July, although there still be spells of rain and thunderstorms due to the humid air.

The forecast between Wednesday, June 30, and Wednesday, July 14, said: “We are likely to see periods of dry, settled and warm weather interspersed with occasional days of thicker cloud, rain and stronger winds. 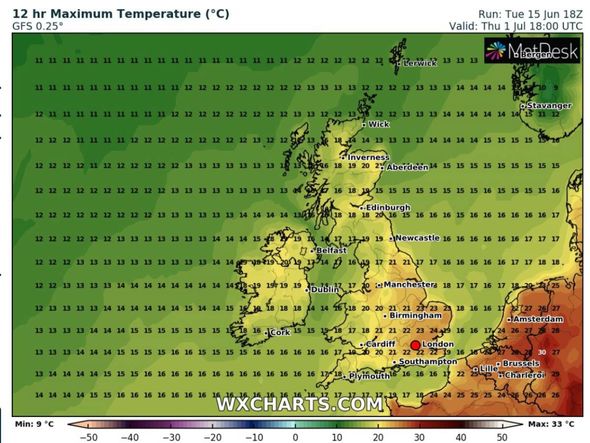 “Temperatures are likely to be close to average nationally.

“Southeastern areas may see some warm or very warm conditions at times, but these probably balanced out by cooler interludes moving in from the west.

“Overall, rainfall accumulations are expected to be close to average for the time of the year.

“Whilst southeastern areas may see fewer spells of persistent rain, thunderstorms may develop during warmer periods.” 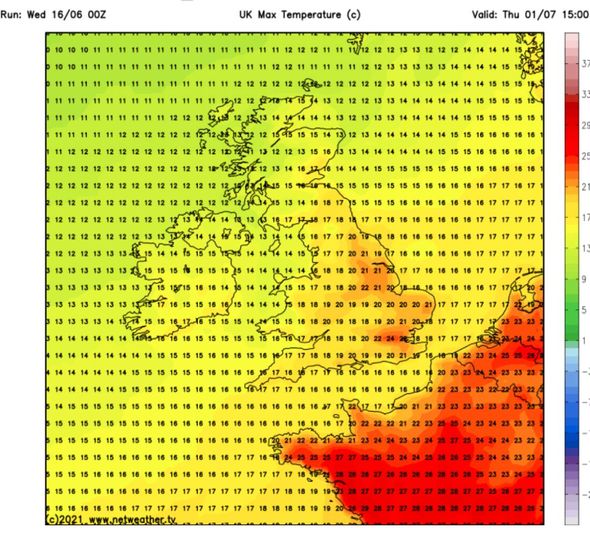 The BBC’s long-range forecast between Monday, June 28, and Sunday, July 11, added high pressure could swoop into the UK at the start of next month and bring “warmer than normal weather”.

The forecast said: “There are some robust signals for high pressure to be more of a feature nearby or overhead in July.

“This is likely to be on a temporary basis rather than seeing several weeks of dry, sunny weather.

“This is thanks to the warm waters in the Atlantic, which will tend to draw high pressure away from us with low pressure lingering near Scandinavia. 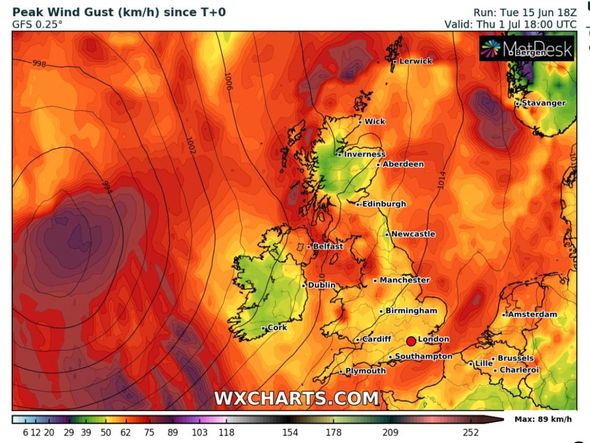 “Transient highs should occasionally drift across northern Europe and bring some dry, settled and warm spells that last for a few days.

“The alternate pattern for the first half of July is that high pressure lingers overhead throughout, leading to several weeks of warmer than normal, dry, and largely sunny weather.”

But before that, the Met Office has issued yellow warnings for storms which could cause flooding and power cuts in south-east England from 9am on Friday.

This warning covers areas south-east of Hull including Birmingham, and areas in the south except Devon.