BBC Weather: Temperatures set to rise in parts of the UK

July is kicking off on a warm note as high pressure passes through Europe over the next couple of days. The latest heat maps at Netweather have turned red hot, showing sweltering highs of 28C hitting France tomorrow. The shades of red on the map are then seen pushing upwards towards the south-east of England on the same day, sparking potential highs of 25C in London and Kent in the south-east.

Further up the country, Leeds and Bradford in Yorkshire could bake in highs of 24C, while Birmingham and Peterborough see 22C.

However, the heat blast is not expected to stick around long over the weekend, as a new low pressure system currently developing over the Atlantic is predicted to send temperatures plummeting.

Nick Finnis at Netweather explained how high pressure is expected to sweep the UK on Friday, before a colder front arrives the following day.

He said: “Friday sees high pressure builds in across the UK, so there should be sunshine for most, even in the east of England – where it’s been cloudy most the week. 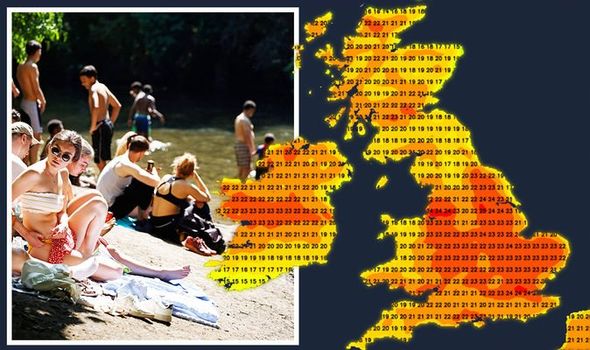 “Cloud will build through the day – which may bring some well-scattered showers across England and Wales in the afternoon, but most will probably escape them.

“High pressure doesn’t last for long before low pressure nudges in from the Atlantic on Saturday, so the weather turning increasingly unsettled from the southwest over the weekend.

“Troughs and a cold front moving northeast across England, Wales and Ireland on Saturday ahead of low pressure west of Ireland will introduce showers to many parts through the day, some of which will be heavy with hail and thunder. 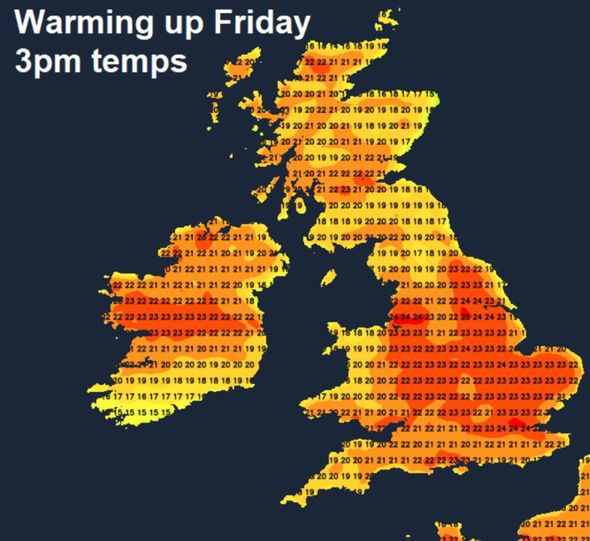 The BBC’s long-range forecast between Saturday, June 26, and Sunday, July 4, warned of rain and wind arriving next week after a weather “pattern change”.

The forecast said: “The forecast for Thursday 1 and Friday, 2 of July has low confidence, with drier conditions possibly developing farther south.

“But showers and maybe thunderstorms will still be possible over southern and eastern England. 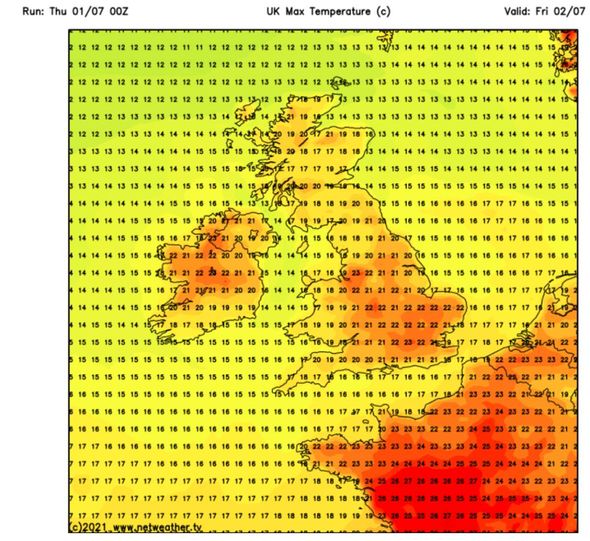 “The end of the week will see the pattern change, with larger low pressure systems developing over the Atlantic and approaching the British Isles.

“We may see rain across most areas ahead of associated frontal systems.

“Western and northern areas would be more likely to bear the brunt of this rain and increasing winds.

“It will also become warmer before the rain, with those winds coming from the south to southwest.” 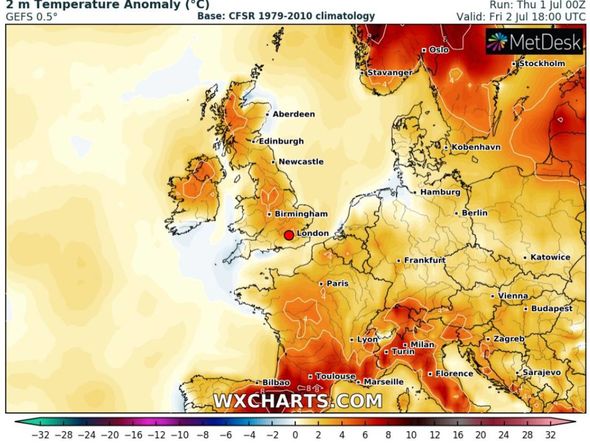 The Met Office also predicted July to start with sunshine followed by spells of rain due to unsettled conditions.

The forecast between Monday, July 5, and Wednesday, July 14, said: “Unsettled and rather changeable conditions look most likely through the start of this period, bringing some sunny spells but also spells of rain or showers, which at times could be heavy and thundery.

“Temperatures generally rather warm or locally very warm in the sunniest areas. 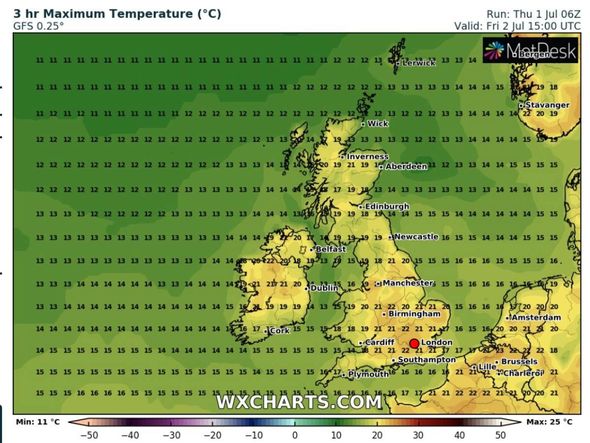 “Through the new week, sunny spells and showers, or perhaps longer spells of rain are most likely across the southern half of the UK.

“Northern and eastern areas likely to experience the best of any fine and dry weather.

“Temperatures are most likely to be above normal, notably in any prolonged sunshine across parts of the northeast.

“Winds will at times be strong, with coastal gales in the west and northwest.”