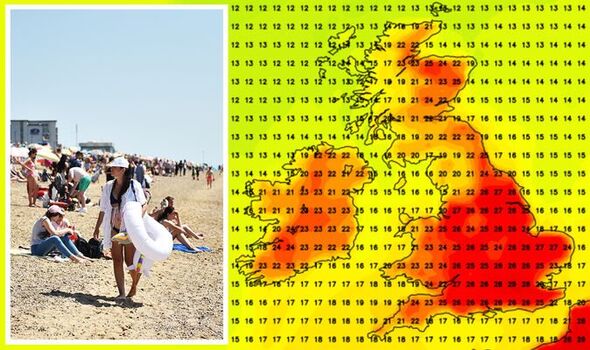 “Temperatures could creep close to those we have just seen during the recent heatwave.”

The weather will stay seasonably mild today and tomorrow before mid-week temperatures ramp up.

Thermometers could hit 27C across southern England on Wednesday as Scotland and the north hovers in the high teens to low 20Cs.

Much of England and Wales will bake on Thursday as the mercury creeps towards the 30C-mark.

Friday will bring another peak of extreme warmth with highs of 29C predicted across southern Britain.

But rather than wall-to-wall sunshine, forecasters warn of a heavy showers and thunder will batter parts of the country.

Met Office meteorologist Aidan McGivern said: “A low-pressure system hangs around for the first part of the new week.

“At first there is the continued risk of heavy showers and even thunderstorms in the south, but as that low moves away a high in the Atlantic starts to build.

“During the early to middle part of next week, there will be high pressure to the west and lower pressure to the north east allowing a changeable north-westerly airflow.

“This will bring showers and a good deal of cloud and temperatures much lower than they have been.”

But high pressure will start to build ahead of the weekend bringing finer conditions and hopes for a Glastonbury scorcher.

Mr McGivern said: “For Glastonbury, the first signs are that high pressure to the west will build next week leading to more settled weather widely but especially to the southwest of the UK.

“The first signs for Glastonbury are that higher pressure will return to the UK, and it will be a fine start with the weather turning drier and brighter.”

Heavy rain after the blazing week of sunshine will come as a shock to the system for some, forecasters warn.

Weathertrending’s John Hammond said: “There could be quite a dollop of rain around for some and it will be quite a shock.”

A return to warmth on Wednesday will kick Glastonbury off to a steamy start before another cooldown, he added.

He said: “The heat may briefly ‘ooze’ back in across some southern and eastern areas for a time early in the new week, perhaps accompanied by thundery rain.

“Just how unsettled, wet and windy it may become will be nervously watched by festival-goers.

“With high pressure retreating south-westwards, the West Country may be one of the last parts of the UK to see a deterioration.

“The weekend looks quite cool and showery for many.”

As summer forecasts continue to heat up, bookies have slashed the odds on this year entering the record books.

Ladbrokes is offering 1-2 from 6-4 on this year turning into the hottest summer on record.

Spokesman Alex Apati said: “We’re on course for a record-breaking scorcher if the latest odds are anything to go by.”