Sunny skies, hot weather and balmy evenings have dominated the weather over the past week, making for an “exceptional spring” according to Met Office forecasters. Now, this hot weather is predicted to last for the rest of meteorological spring and into the start of summer.

Giving the 10-day trend, Met Office meteorologist Aidan McGivern said: “It’s been an exceptional spring so far across the UK so far as sunshine is concerned.

“For the rest of May and the rest of Meteorological spring, there is simply more sunshine to come widely up and down the country.

“There will be an increase in temperatures, later this week, northern and western areas seeing the highest temperatures. Subtle changes into the start of next week, more significant changes later next week.”

Mr McGivern added northern Scotland saw outbreaks of cloud and rain on Wednesday night, “but they are soon out of the way by the start of Thursday and then the high pressure builds back in, but builds to the east of the UK.” 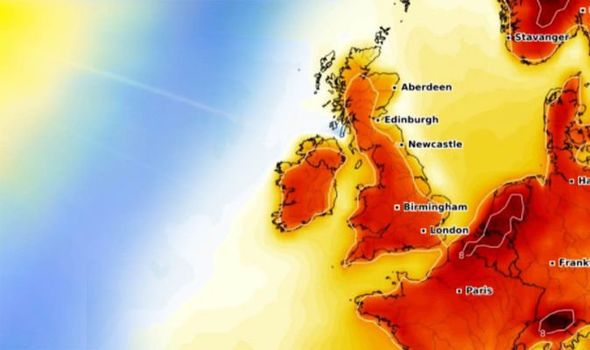 “That means we are going to see more of an easterly airflow, and that will change the distribution of temperatures by the time we get to Thursday, Friday and Saturday.

“Thursday, the distribution of temperatures means it will be hottest in the south, south-west, South Wales, West Wales, South West England as well seeing 26 perhaps 27C.

“That could be the warmest place in the whole of the country, and certainly the warmest day of the year so far in Scotland.” 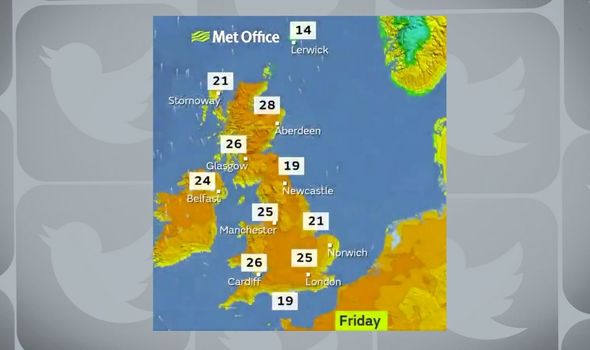 So why is Scotland seeing the scorching highs? Mr McGivern explained: “What’s going on? Well, that easterly breeze is bringing cooler air to the north sea coast as well as the English Channel coast, its actually quite a cool airflow, but its warming up on Friday and Saturday as it crosses the country because of all that strong sunshine.

“Then as it moves over the higher ground and say central parts of Scotland, it warms up and dries up even further so that when it comes down on the other side of the mountains, well those temperatures are even higher than they were before.

“This is called the Foehn Effect, northern Scotland will benefit most from this at 28C, mid to high 20sC elsewhere across parts of northern and western Britain.”

Mr McGivern added on Sunday there will be “similar sorts of temperatures” with the mercury “widely 25 to 28C” across northern and western Britain, feeling “cooler on the coasts”.

However, on Monday the forecaster said there will be a change, with the North Sea coasts feeling “much warmer” and the coasts of northwest Scotland “much cooler”.

This is because “the winds are starting to shift”.

Mr McGivern said the main forecast for the next five days sees hot sunshine, with “sunny skies for the vast majority.”

However, this heat has the potential to spark a thunderstorm – which the forecaster said could strike across the northwest highlands on Saturday and Sunday. 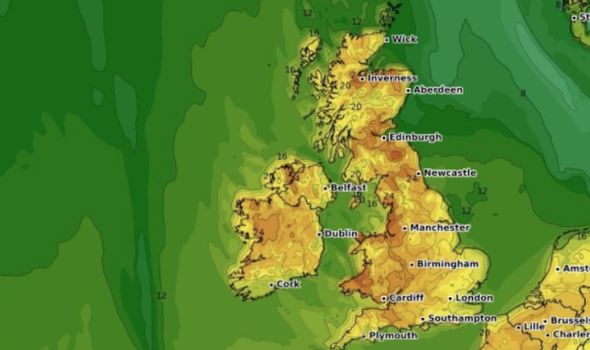 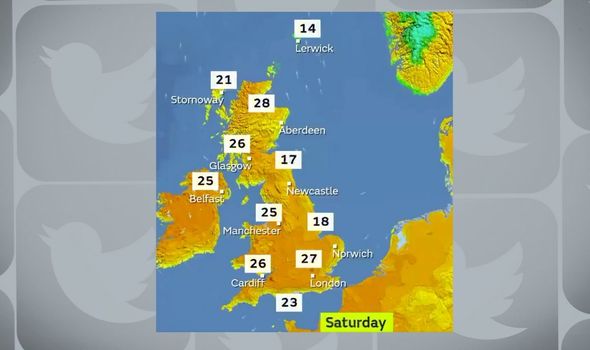 Anyone heading outside over the next few days should take precautions as UV and pollen levels will be high.

This means wearing suncream and sunglasses when outside, and if suffering from hay fever taking any treatment or precautions which may help.

Social distancing guidelines must also be adhered to for anyone heading outside – with lockdown measures still in place.

Bookmaker Coral now makes June odds on, at 4/5, to be the hottest June since records began.

Coral spokesman Harry Aitkenhead said: “May has seen some truly glorious spring weather and we think that it’s more of the same for June.

“We now make it odds on, having cut the odds, that next month breaks the record as the hottest June ever.”

This May is on course to be the driest recorded since the 19th Century.

Mr Aitkenhead said: “It’s been the driest May since the 1800s and that means if the weather continues we’ll be looking at a hosepipe ban during the summer of 2020.”