We were expecting a cacophony of noise after the Ugandan Election Commission declared the result in a presidential poll that was both contentious and shockingly violent.

However, we did not see any angry chatter, nor collective calls to arms on popular social media sites because the government had switched the internet off.

The streets of the capital Kampala were quiet as members of the military, carrying short-barrelled machine guns, walked languidly down the side of city streets. 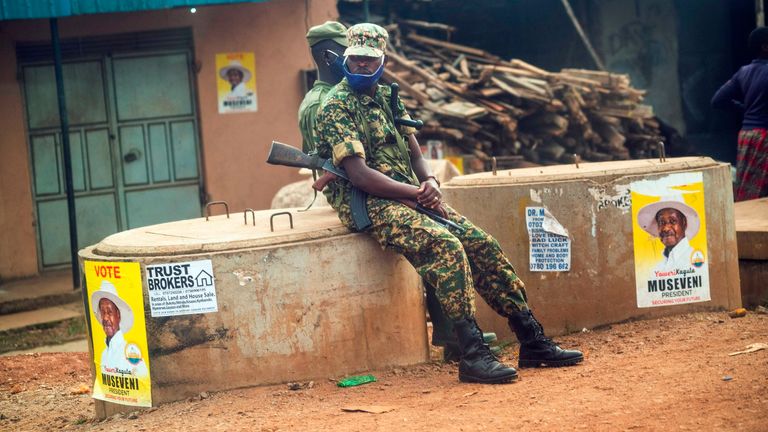 The 38-year old opposition leader Bobi Wine, who visibly connected with tens of thousands of younger Ugandans during the campaign, had been removed from public view. The security services are surrounding his home and blocking anyone from entering.

In effect, the government has used the tools of state to turn down the noise – to dissipate the heat – after its long-time leader, President Yoweri Museveni, took 58% of the vote.

And the authorities’ masterplan seems to be working, at least for now.

We were invited to a press conference by Bobi Wine’s National Unity Platform (NUP) party where they were expected to outline their immediate plans, address their leader’s absence, and introduce newly elected parliamentary members to the nation. But the event proved to be nothing short of a shambles.

The NUP’s spokesman, Joel Senyonyi, began by saying that Mr Wine was now, “effectively under house arrest, an illegal detention”.

He criticised the election as an exercise in mass fraud, “with outcomes from the Election Commission that are as curious and amazing as anyone can imagine”.

But when I asked him what they planned to do about it, the spokesman was unable to offer anything specific.

“What do you want people to do?” I asked.

“Our simple answer to that is we are urging Ugandans to use every means available in the constitution to keep pursuing the change of leadership that we want.” “What does that mean?” I asked.

“Use every constitutional avenue to achieve change. I think that is very clear. Now pardon us, our colleagues (have been raided)…”

The press conference ended abruptly, before any of the new MPs had been introduced, with Mr Senyonyi signalling that some sort of emergency situation had developed.

He left through the gate of the NUP’s headquarters with several party officials and two-dozen members of the media, including Sky News, in tow.

We drove at not insignificant speed to a slum in the capital, then ran down a sewage-strewn track to a small clearing where a man, sitting in a plastic seat, relayed a story about an attack meted out by the security services.

His name was Andrew Natumanya and said he was a volunteer polling agent for the NUP party. He had been collecting declaration forms with results from individual polling stations in central and eastern Uganda when a group of plain clothes policemen had grabbed him, roughed him up and confiscated the documents.

I noticed that journalists and camera operators began to drift away as the young man outlined his experience. His allegations are disturbing and deserving of attention – but they are not unique.

Over the past few months, dozens of NUP party members and supporters have lodged allegations of harassment, beatings and arbitrary arrests as they attempt to challenge a system of government that does not tolerate organised dissent. But the National Unity Platform had a crucial opportunity at the press conference to outline their plan, to come up with an approach which exploits and builds on the momentum they have manufactured over the past year.

Should young Ugandans take to the streets? Does the NUP support non-violent protest? How do concerned citizens challenge an election result that many believe is fraudulent?

Today, the people needed answers and the country’s biggest opposition party, minus its leader, could not provide any.