As an immense new surge in coronavirus cases sweeps the United States, President Trump is closing his re-election campaign by continuing to declare before large and largely maskless crowds that the virus is vanishing.

Hopping from one state to the next, he has made a personal mantra out of declaring that the country is “rounding the corner,” even as case counts soar, fatalities climb, the stock market dips and a fresh outbreak grips the staff of Vice President Mike Pence.

Mr. Trump has attacked Democratic governors and other local officials for keeping public-health restrictions in place, denouncing them as needless restraints on the economy. And the president has been describing the pandemic as a political hindrance inflicted on him by a familiar adversary.

“With the fake news, everything is Covid, Covid, Covid, Covid,” Mr. Trump complained at a rally in Omaha on Tuesday, chiding the news media and pointing to his own recovery from the illness to downplay its gravity: “I had it. Here I am, right?”

Earlier the same day, Mr. Trump ridiculed the notion that the virus was spreading rapidly again, falsely telling a crowd in Lansing, Mich., that the reported “spike in cases” was merely a reflection of increased testing. The 74-year-old president pointed to his teenage son, who tested positive for the virus this month, to suggest that many of those cases were of only trivial concern.

“Do you ever notice, they don’t use the word ‘death,’ they use the word ‘cases’?” Mr. Trump said. “Like, Barron Trump is a case. He has sniffles, he was sniffling. One Kleenex, that’s all he needed, and he was better. But he’s a case.”

Then in Bullhead City, Ariz., on Wednesday, Mr. Trump promised voters that a vaccine would be available “momentarily,” though scientists and pharmaceutical companies say no such breakthrough is assured.

He also took aim at his Democratic opponent, Joseph R. Biden Jr., claiming without evidence that if the former vice president were to be elected, “there would be no graduations, no weddings, no Thanksgiving.” And Mr. Trump mocked a California mask mandate, saying, “You have to eat through the mask.”

‘The American People Deserve So Much Better Than This,’ Biden Says

On Wednesday, Joseph R. Biden Jr., the Democratic nominee for president, addressed President Trump’s rally he held in Nebraska that left his supporters standing out in the cold for hours.

The American people deserve so much better than this. Just look at what happened last night in Omaha after Trump, after the Trump rally ended, hundreds of people, including older Americans and children, were stranded in sub-zero freezing temperatures for hours. Several folks ended up in the hospital. It’s an image that captured President Trump’s whole approach to this crisis. He takes a lot of big pronouncements, and he makes a lot of big pronouncements, but they don’t hold up. He gets his photo-op and he gets out. He leaves everyone else to suffer the consequence of his failure to make a responsible plan. It seems like he just doesn’t care much about it. And the longer he’s in charge, the more reckless he gets. It’s enough. It’s time to change. Even if I win, it’s going to take a lot of hard work to end this pandemic. I’m not running on the false promise of being able to end this pandemic by flipping a switch. But what I can promise you is this: We will start on Day 1 doing the right things. We’ll let science drive our decisions. We will deal honestly with the American people and we’ll never, ever, ever quit. That’s how we’ll shut down this virus. So we can get back to our lives a lot more quickly than the pace we’re going at now. 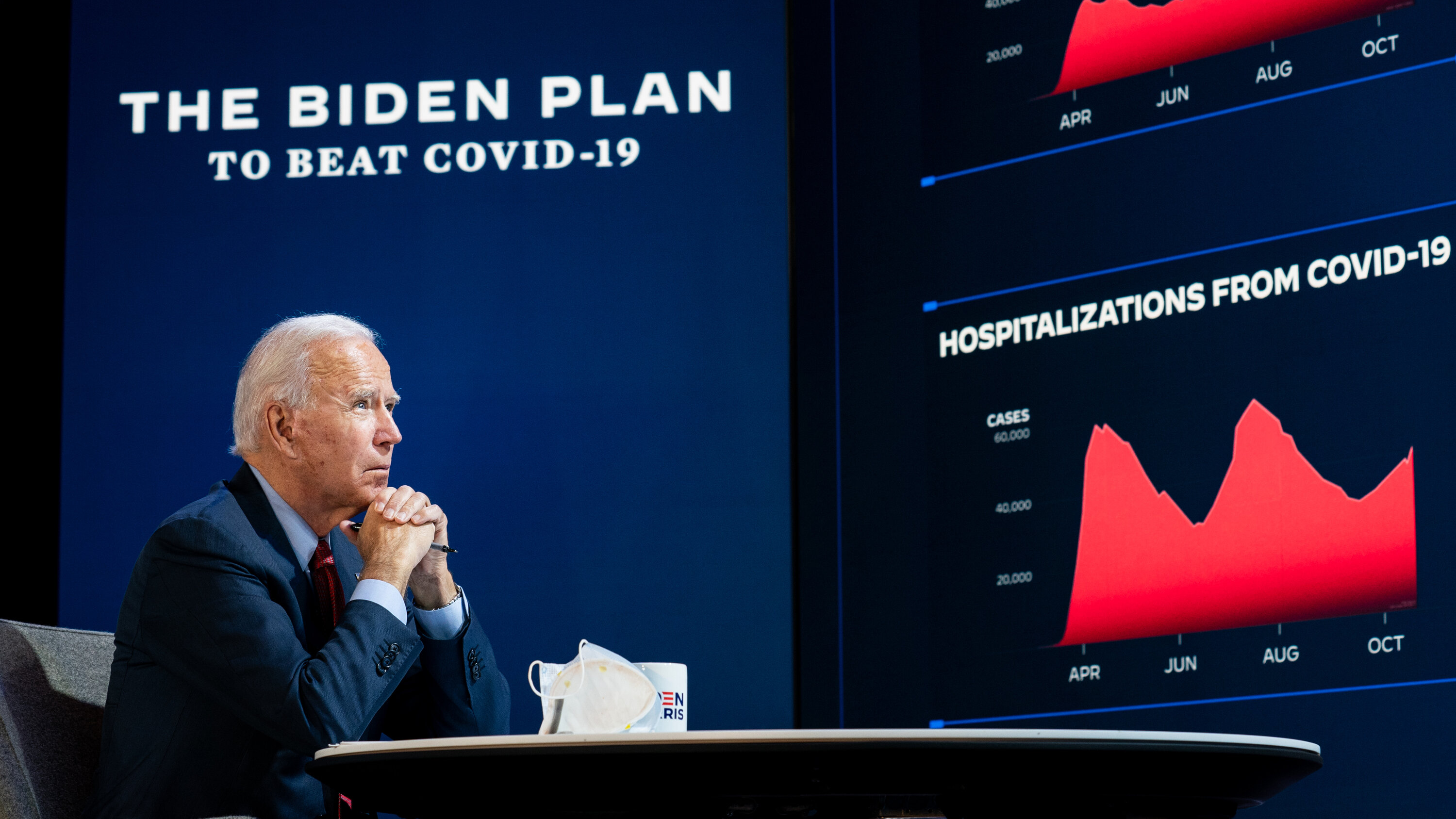 “I’m not running on the false promise of being able to end this pandemic by flipping a switch,” Mr. Biden, who received a briefing from public health experts about the coronavirus pandemic, said in remarks at a theater in Wilmington, Del. “But what I can promise you is this: We will start on Day 1 doing the right things. We’ll let science drive our decisions. We will deal honestly with the American people.”