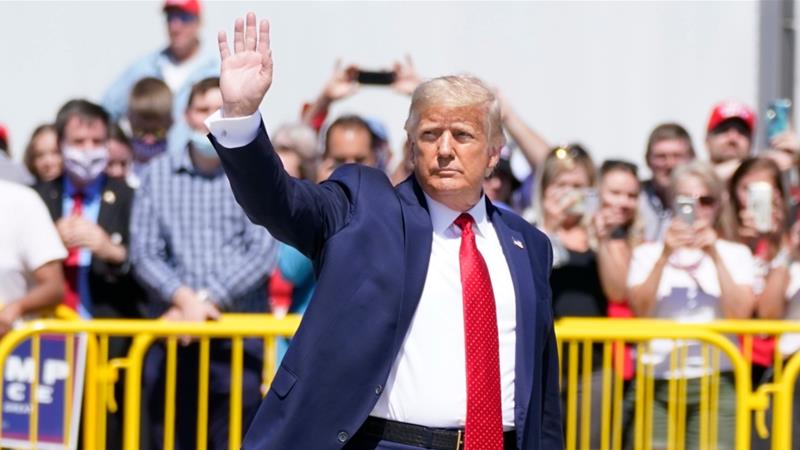 As US Democrats kick off a highly unorthodox convention that will culminate in the nomination of presidential candidate Joe Biden, President Donald Trump, never one to share the spotlight, is hitting the campaign trail.

The visits to several key battleground states during the Democratic Party’s biggest election-year event is yet another break from tradition for a candidate-turned-president who has built a reputation on bucking norms.

Historically, candidates have kept a low profile during the other party’s days-long conventions, a kind of temporary “laying down arms for the week”, political analyst Eric Ham told Al Jazeera.

But Trump is setting out on his busiest campaign travel week since the coronavirus pandemic drastically curtailed the president’s public appearances. Trump also held campaign events during the 2016 Democratic National Convention and famously grabbed headlines by calling on Russia “to find” missing emails from then-Democratic candidate Hillary Clinton’s private server.

Trump’s eagerness to again take to the stump during this cycle’s convention indicates that his campaign feels it has little choice amid slumping polls, a bump in support for Biden after his history-making running mate pick of Senator Kamala Harris, and an anticipated post-convention bump in Democratic support, Ham said.

“With Trump being not just down, but way down in the polls, and to basically have a week where you are losing time, while COVID-19 continues to rage,” said Ham, “that’s a lot of ground for him to cede in this moment.”

On Monday, Trump told reporters at the White House that the campaign had entered the “final crunch”.

Earlier in the day, he told the Fox and Friends programme that he was compelled to campaign this week by the media’s coverage of his presidency and campaign.

“I have no choice because we have a fake media in this country,” Trump said when asked about the break from tradition in his campaign plans. “So I have to work, I don’t have time not to.”

Trump on the trail

Trump landed in Minnesota on Monday and will later in the evening deliver a speech at a private air hangar in the battleground state of Wisconsin. That event will be about 145km (90 miles) from Milwaukee, the control centre of the Democratic convention, which will be mostly digital with speeches streamed from across the country.

The president is expected to criticise Biden’s economic policies while seeking to draw a distinct counterpoint to Biden’s coronavirus safety-first approach to campaigning.

On Tuesday, Trump is set to take on Biden’s immigration policies during a visit to Yuma, Arizona, a state that has not voted for a Republican presidential candidate since 1996 but where Trump is currently slightly trailing in the polls.

Then on Thursday, Trump will speak at a building supplies forge less than 16km (10 miles) from Scranton, Pennsylvania, where Biden was born.

Campaigning amid the coronavirus has been very much “playing on Joe Biden’s field”, said Ham, and the most recent blitz is an attempt by Trump to get back into his element.

“Joe Biden does really well at retail politics – speaking in intimate settings, speaking one on one,” he said. “The campaign has been brought down to eye level, which really helps Biden,”

“That does not work for Donald Trump,” added Ham. “He needs the rallies, he needs thousands of people, he needs to put on a show.”

The campaigning during the convention will not be reserved to Trump, with Trump Victory, the campaign’s joint field programme with the Republican National Committee, holding more than 2,500 events across the country, according to the RNC.

The party plans to knock on more than one million doors and call millions of voters during the week.

“We’re going to be all over the place during this convention,” said Trump campaign spokesman Hogan Gidley, according to The Associated Press news agency.

The campaign last week announced an up to $10m digital advertisement buy during the event that will blitz sites like YouTube and Hulu, and major news websites, which will likely be streaming the Democratic convention.

The Biden campaign has dismissed the digital campaigning, with spokesman Andrew Bates describing the ploy to the New York Times as a “smoke and mirrors charade” that attempts to distract from Trump’s “failed leadership”.