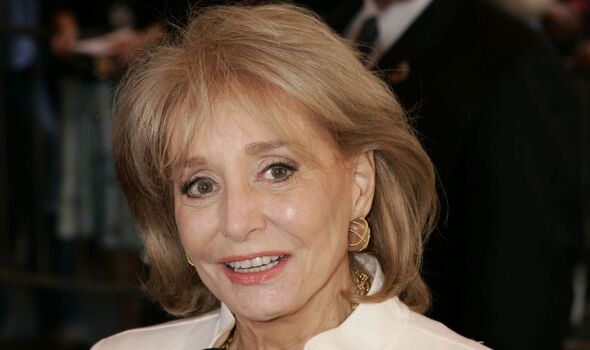 Through the span of her five decade career, she has interviewed notable names including Cuba’s Fidel Castro, Margaret Thatcher, Libyan ruler Muammar Gaddafi, Saddam Hussein and every US president and first lady since Richard and Pat Nixon.

Ms Walters was the first female co-host of Today, the hugely successful US daily news and magazine show.

She was also the first evening news anchorwoman in broadcast history and a co-creator and co-host of chat show The View.

CEO of Disney and owner of ABC Robert Igor confirmed the tragic death and described it as “sad news”.

Mr Igor said the late broadcaster was a “true legend”, a “one-of-a-kind reporter” and “a pioneer not just for women in journalism but for journalism itself”.

He said in a statement: “I have sad news to share today as Barbara Walters passed away this evening at her home in New York.

“Barbara was a true legend, a pioneer, not just for women in journalism, but for journalism itself.

“She was a one of a kind reporter who landed many of the most important interviews of our time; from heads of state to the biggest celebrities and sports icons.

“I had the pleasure of calling Barbara a colleague for more than three decades. More importantly, I was able to call her a dear friend.

“She will be missed by all of us at the Walt Disney company and we send our deepest condolences to her daughter.”

Over the span of her impressive career, she earned 12 Emmy awards, 11 of those while at ABC News.

The American anchor was famous for her hard hitting interview style and she became known for securing exclusive interviews with powerful names.

Prior to finding her way on screen, Ms Walters worked as a publicist and magazine journalist.

In recent years she stepped out of the public eye, with her latest public appearance taking place in 2016.

Ms Walters is survived by her only daughter, Jacqueline Danforth.