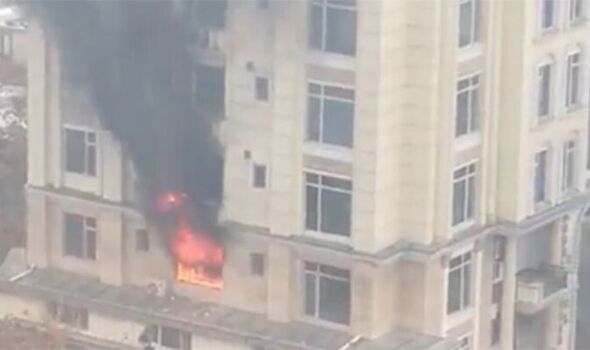 A hotel catering to foreign visitors in Afghanistan’s capital of Kabul was attacked Monday, with three of the assailants were killed, and 30 people injured, a Taliban official said. Two foreign residents were injured when they jumped out of windows to escape, said Zabihullah Mujahid, the Taliban government’s spokesman.

Residents reported explosions and gunfire and photos and video posted on social media showed smoke rising from the building.

The Emergency Hospital in Kabul said in a tweet that there was an explosion and gunfire near a hotel approximately a kilometer away. “So far, we have received 21 casualties – 3 were already dead on arrival.”

Khalid Zadran, the Taliban-appointed spokesman for the Kabul police chief, said the attack lasted several hours. He said a “clean-up” operation was ongoing.

No one immediately claimed responsibility for the attack but the regional affiliate of the Islamic State group — known as the Islamic State in Khorasan Province and a rival of Afghanistan’s ruling Taliban – has increased its attacks since the Taliban takeover of the country last year.

A resident of the Shar-e Naw neighborhood where the attack happened told The Associated Press that he heard explosions and then several gunshots. He spoke on condition of anonymity for fear of reprisals from Taliban officials.

Another resident in the Shar-e Naw neighborhood told the AP that a gun battle was still going on.

He said he and his family were staying inside their home about three blocks away form the attack site. He also spoke on condition of anonymity for fear of reprisals.

Taliban forces rushed to the area and blocked all roads leading to the site, said Zadran, the police chief spokesman.

Military analyst Zaid Hamid attempting to blame the West as he tweeted a clip of the hotel in flames.

He commented: “A hotel occupied by Chinese in Kabul has been attacked.

“Taliban government need to understand that their weakness is being exploited by the common enemies.”