In Virginia, Maryland and Washington, D.C., established Afghan restaurateurs are reaching out to help refugees fleeing the return of the Taliban.

Hamidullah Noori with loaves of Afghan bread in the Mantu, his restaurant in Richmond, Va.Credit…Jennifer Chase for The New York Times

RICHMOND, Va. — Hamidullah Noori was 8 years old when his father, uncle and cousin were killed by Taliban militants in Kabul, Afghanistan. As the eldest son, he soon went to work to support his family, selling boiled potatoes and balloons from a pushcart. Violence and flight have shaped his life ever since.

So as he follows news reports about the Russian assault on Ukraine, Mr. Noori feels a weary kinship with the refugees fleeing that conflict, knowing that their futures will resemble his past.

“This is something where I have already experienced it,” he said, sitting in his Richmond restaurant, the Mantu. “If you’re lucky, you survive.”

When Mr. Noori opened the Mantu in 2019, four years after arriving in Virginia as a refugee, he joined a group of restaurateurs who had already established a solid presence for Afghan cuisine in the District of Columbia, Maryland and Virginia. The region is home to one of the largest populations of resettled Afghans in the United States — more than 16,000 came to the area during the 20-year war that ended last year, an influx second only to California’s, according to U.S. News & World Report.

These restaurants represent generations who have fled wars since the 1970s, and the cuisine of a region that has been interconnected with the rest of the world for centuries, owing to its location at the nexus of the ancient Silk Road trade route.

The withdrawal of U.S. troops from Afghanistan last August, which ended the conflict and led to the Taliban’s swift takeover of the government, compelled many Afghan restaurateurs in Maryland, Virginia and the District of Columbia to come to the aid of the refugees who soon started pouring into the area. One by one, the restaurants have taken it on themselves to cook for the new arrivals, raise money to help them resettle and provide them jobs. The Mantu’s 10 employees are all Afghan refugees. 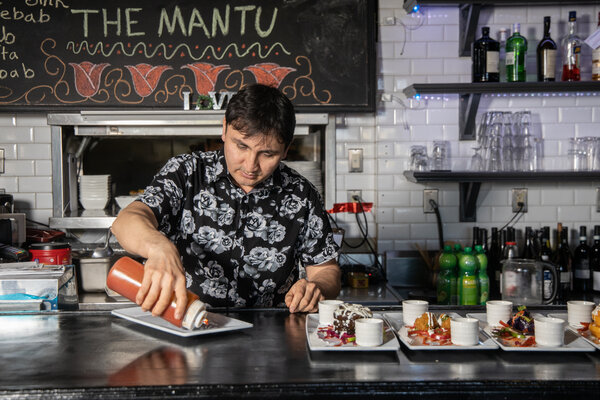 On a single day last fall, Mr. Noori cooked nearly 3,000 meals for refugees at a local military base. He has since set a goal of feeding every Afghan family resettling in Richmond their first meal in the United States.

Mr. Noori, 36, a member of Richmond’s Ismaili Muslim community, said he draws strength from helping people who have every right to be fearful.

“When you have the courage to gain something, you’ll gain it,” he said. “The universe will be at your service.”

The resurgence of the Taliban has threatened the return of its past brutality and repression, particularly of women. And the war in Ukraine is a fresh reminder of Afghanistan’s long history of upheaval.

Shamim Popal wept as she recalled her escape from Kabul with her three young children — including her 6-month-old daughter, Fatima — in 1980, after the Soviet Union invaded. She left behind her ailing father, who died soon after, to join her husband, Zubair, in Bahrain.

“What we see now, it really reminds us of the days that we left,” Ms. Popal, 67, said in early March, in the basement dining room of Lapis, her family’s Afghan restaurant in Washington. “It’s so sad.”

The couple sat with Fatima, now 42, and one of their sons, Omar, 43 — all of them business partners who opened their first restaurant in the early 2000s. They considered serving their native cuisine, but ultimately decided to open a French restaurant instead.

“It was too close to 9/11,” Fatima said. “People were still very stereotypical about terrorists and Afghanistan.”

Such concerns had ebbed by the time Lapis opened in 2015, when Afghan restaurants were flourishing, both locally and globally.

Last August, as Afghan refugees began surging into the United States, the Popals solicited donations of clothes, toiletries and other essentials on the restaurant’s social media accounts.

The overwhelming response turned Lapis into a makeshift distribution center. The donations allowed the Popals to support refugees as humanitarian groups scrambled to provide aid to the new arrivals. More than 76,000 Afghans have resettled in the United States since last August.

“We had no walking space,” Fatima said. “We were still an open business.”

An enlarged, framed version of Shamim’s passport photograph from the day she left Afghanistan hangs in the restaurant’s main dining room, among many others photos that evoke happier times in Kabul, before the Soviets invaded.

“We wanted to give people a slice of my parents’ life,” Omar said, “before you have this loss of the culture.”

In a 2020 cookbook, “Parwana,” Durkhanai Ayubi, whose family runs a restaurant of the same name outside Adelaide, Australia, writes that cooking after leaving Afghanistan in the late 1980s became a way for her mother, Farida Ayubi, the restaurant’s chef, “to stay connected with what was being suppressed and at risk of being lost.”

The book is a sweeping history of a cuisine — distinguished by what Ms. Ayubi calls “warm spices” like cumin, cardamom, cinnamon and turmeric — that has cross-pollinated with the cooking of India, China, Mongolia, Turkey and Persia.

The Afghan restaurants in the Maryland, Virginia and the District of Columbia, most of which are clustered in metropolitan Washington and Baltimore, share similar dishes — sabzi, aushak, Kabuli palaw — but their personalities are as different as their origins.

The Helmand, in Baltimore, is an elder in the group: Baltimoreans have been eating platters of dopiaza and lamb chops on its white tablecloths since 1989. Qayum Karzai, who owns the restaurant with his wife, Pat, can still be found seating guests on weekends.

Mr. Karzai, 74, is the brother of the former Afghan president Hamid Karzai, who appointed him to that country’s parliament. Qayum Karzai resigned his seat in 2008, and later mounted a short-lived campaign to succeed his brother. The family has been hugely influential and controversial in Afghanistan, where its political connections helped members amass wealth.

Qayum Karzai was exposed to American politics in the 1970s, while working as a young waiter at the Devil’s Fork, a power-dining destination in Washington. “The meetings that these senators had, from both parties,” he recalled, “they acted like members from the same family.”

Three miles from the Helmand, in the Hampden neighborhood of Baltimore, Afghan restaurants are on the rise. During a recent lunch at Spring Cafe, diners quietly served themselves chainaki, an Afghan stew, from teapots, delivered with side dishes of sliced daikon and serrano chile.

Hamasa Ebadi, 27, and her parents, Hamida, 58, and Atiq, 60, opened the tiny restaurant in the fall of 2020, inside a former bubble-tea shop. And Assad Akbari, the former longtime general manager and chef at the Helmand, has announced plans to open his own Afghan restaurant this year, on the same street.

Ms. Ebadi said she came to the United States in 2010 for high school. “I wanted to continue my education, and under the Taliban, women simply weren’t allowed to,” she said. Today, Ms. Ebadi commutes between Baltimore and Dallas, where she works as a neuroscience researcher.

The Taliban’s return to power, and its continued subjugation of women, prompted one restaurateur, Omar Masroor, to take symbolic action. Last September, Mr. Masroor, 47, stepped away from the operations of his family’s restaurants — Bistro Aracosia in Washington, and Aracosia McLean and Afghan Bistro in Northern Virginia — and promoted two of his daughters, Taliha, 23, and Iman, 22, to management positions.

Today, the sisters, together with their mother, Sofia, 46, who oversees the restaurants’ food, largely run the operation — roles that would be denied to them in Afghanistan, where the Taliban grants women little freedom outside the home. The family is planning to open a fourth restaurant, Afghania, in Georgetown, and is training the youngest daughter, Zainab, 21, to be a manager as well.

“We feel horrible for the situation for women in Afghanistan,” Sofia said. “For my daughters to know that we’re confident, to know that we believe in them, it gives them that little push to be confident in themselves.”

Mr. Noori, the Richmond restaurateur, trained as a chef in Kabul. After his arrival in Virginia, he worked a number of different low-paying jobs, including driving for a ride service.

“I printed up a card: Chef Noori, Catering, Afghani Food,” he said. “I was always talking about my restaurant dream to people.”

The networking led Mr. Noori to Micheal Sparks, the chief executive of the Underground Kitchen, a special-events company that hires and supports chefs from backgrounds that have been underrepresented in Richmond restaurants.

The two men met when Mr. Sparks was getting a massage at the house of an employee for the local chapter of the International Rescue Committee, who was moonlighting as a masseuse.

“Noori walks in, looking like the prime minister of Canada,” Mr. Sparks recalled. “The first thing out of his mouth after I tell him about Underground Kitchen is, ‘How much are you going to pay me?’”

Mr. Noori’s meals with the Underground Kitchen featured dishes that are now signatures at the Mantu, including various versions of the rice dish palaw; skewered, seasoned ground beef on hot iron platters; and a dish of sautéed potato skins similar to what his mother used to make in Kabul from scraps scavenged from a nearby French fry shop.

The chef is particularly proud of his mantu, the dumplings that gave the restaurant its name. “When you fold the dumpling into a rose and you steam them, it blossoms,” he said. “The dish is romantic.”

After the Afghan pop-up dinners captured the notice of the local press, Mr. Sparks helped Mr. Noori secure the lease for the Mantu’s location in the city’s Carytown neighborhood. Mr. Noori, Mr. Sparks and Kate Houck, a partner in the Underground Kitchen, designed the restaurant’s space, and have started working on plans for a bakery and food market in a Richmond suburb.

The new business will give Mirullah Karimi, an Afghan baker Mr. Noori hired last month, a place to sell his bread, and will create jobs for other Afghans trying to restart their lives. Mr. Noori also plans to open two smaller versions of the Mantu in Richmond.

“Coming from another country into America, life is hard,” said Neamatullah Mohammadi, 31, who was an engineer in Afghanistan before Mr. Noori hired him as a manager at the Mantu, even though he didn’t speak English or have any restaurant experience. “Chef Noori helped me here, with a car. He’s even helping me find an engineering job.”

In early March, Mr. Noori wore a T-shirt he sells to help raise money for his relief efforts. It reads: Proudly Supporting Afghan Refugees. Two weeks later, he created a similar shirt in support of Ukrainians.

“This is what humanity is, to hold each other’s hand when in need,” he said. “Everything else is secondary.”