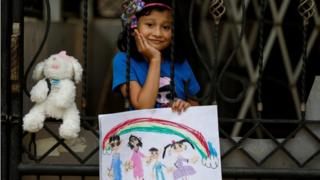 Drastically limiting people’s contact with others seems to be helping many countries stem the spread of the coronavirus. But as economies slump and mental health frays, governments are realising that getting out of the lockdown is going to be even more of a challenge.

Some policymakers are now exploring how to expand the “social bubble” of people we interact with.

According to a memo leaked to local media, authorities in Belgium were considering allowing residents to gather with 10 other people of their choice every weekend.

To close the network of possible infection, every member of the group would have to include the other nine people in their top 10. And once chosen, each person would be banned from meeting with anyone outside of their preferred 10.

It’s unclear how this would be policed. For some, it could also create a new social nightmare – who do you pick? And what if the person you choose for your top 10 doesn’t include you in theirs?

This idea was not included when Belgium announced its latest measures for lockdown easing on Saturday, but other countries are pondering similar moves.

Scotland’s First Minister Nicola Sturgeon told BBC Radio Scotland last week she was considering expanding the definition of “households” to allow small gatherings of people, “encouraging people who live alone to maybe match up with somebody else who is on their own, or a couple of other people to have almost kind of bubbles of people”.

Meanwhile New Zealand, one of the earliest adopters of lockdown measures, has settled on an expansion policy. From next week, New Zealanders will be free to slightly extend their bubbles of contact to include close family, caregivers and those living in isolation – so long as they are living in the same town or city.

The country has seen a steady decline in new coronavirus cases in recent weeks. To date, it has had 18 deaths and 1,470 confirmed cases.

Prime Minister Jacinda Ardern has also been praised for her compassionate public messaging during the outbreak, addressing the impact of lockdown on people’s social lives and mental wellbeing.

But while a vaccine is being developed, many nations are hesitant to allow more social contact in case it spurs another wave of infection.

So could the UK expand its ‘social bubbles’?

England’s chief medical officer Chris Whitty has said some socially disruptive measures will have to be in place until the end of this year. But the extent of these steps, and how long they will be enforced, is difficult to predict.

When making their decisions, scientists and policymakers look to a key metric known as the effective reproduction rate (Rt) – the rate at which the virus is spreading among the population. Britain’s current Rt is one, according to the latest data from the London School of Hygiene and Tropical Medicine (LSHTM), meaning every person who contracts it, on average, will transmit the virus to one other person.

In several countries, governments have refrained from easing lockdown measures until their national Rt is significantly less than one. For this reason, the UK has extended its lockdown for the next few weeks.

Stefan Flasche, an associate professor at the LSHTM, agrees it’s too early to relax restrictions in the UK. But when it is safe to do so, he says the extended social bubbles may be an important “coping mechanism” for people while the search for a vaccine continues.

“It’s not designed to solve the pandemic, but it will help the social component,” he says. “We will have the risk of Covid for a long time, so anything to keep society functioning would help.”

The lockdown’s impact on mental wellbeing is already being keenly felt around the world. In the US, a national mental health helpline has seen a dramatic increase in people getting in touch, with an increase in calls close to 900%. Across the Atlantic, the NHS has opened its own hotline to support health workers during the pandemic, as staff face increasing pressure.

Andy Bell, deputy chief executive of the Centre for Mental Health in the UK, is unsure if a small expansion of social bubbles will be good for the public’s mental health.

“It’s important to understand that not everyone is experiencing this equally,” he told the BBC.

“Lockdown is much harder if you’re unsafe, if you’re on a very low income, if you are in overcrowded accommodation. The challenges to mental health are far greater when you’ve got those risk factors anyway.

“We’re going to have to learn in real-time now,” he added.

But Brian Dow, the deputy head of Rethink Mental Health, believes such a policy would be beneficial, so long as it is managed well.

“It allows people to release that anxiety they may be feeling by being trapped indoors,” he said. “People have been very creative about [socialising] online but frankly, right now, people just need a hug.”