Hugely popular in its home country, chicha morada has been a source of inspiration for chefs in New York City for cocktails, savory dishes and desserts.

Chicha morada is a popular drink in Peru made with purple corn, apples, pineapple, lime, sugar and spices, and is often boiled over several hours.Credit…Jose A. Alvarado Jr. for The New York Times

Several times a week, Claudia Berroa simmers purple Peruvian corn with pineapple skins to make chicha morada for her restaurant, Claudy’s Kitchen, in Riverdale in the Bronx. As the cobs rise in the bubbling liquid, she thinks of her mother, who used to boil the beverage over a wood fire in Lima. “I wanted to make it like my mom used to make it,” she said.

In Peru, chicha morada is as popular as sweet iced tea is in the American South, and as Peruvian chefs have opened restaurants here in New York, it’s a must on the menus. Chefs often dedicate more than two hours a day to simmer the corn with pineapple, apples, lime, sugar and spices like cinnamon and clove, and use the chicha morada in cocktails, savory dishes and desserts.

“It has those warming Christmas spices, but it’s so refreshing,” said Erik Ramirez, the chef and partner at Llama Inn in Williamsburg, Brooklyn, who likens the drink to “Christmas on the beach.” Mr. Ramirez simmers the drink for 45 minutes, lets the ingredients sit in the beverage as it cools overnight, and later adds sugar, then fresh squeezed lime to order. The restaurant’s most popular cocktail, the Llama Del Rey, has a chicha morada base.

Though the timeline of the beverage’s origins are blurry, the drink existed before the Incas, said Nino Bariola, a sociologist at the University of Texas at Austin. Some evidence points to the drink being fermented in precolonial times, though it’s unclear when Peruvians switched the process to a boil or simmer. What is known is that by the 19th century, writers and travelers mentioned that the chicha morada was being made this way, and there are clues that the drink was a part of everyday life, like its representation in some of Francisco “Pancho” Fierro’s paintings.

By this time, many people were also consuming chicha morada and its cousin, a dessert pudding called mazamorra morada, particularly in Lima. In the 1950s, the drink was prominent in Peruvian cookbooks, Mr. Bariola said, showing that there was “salient consumption of chicha.” 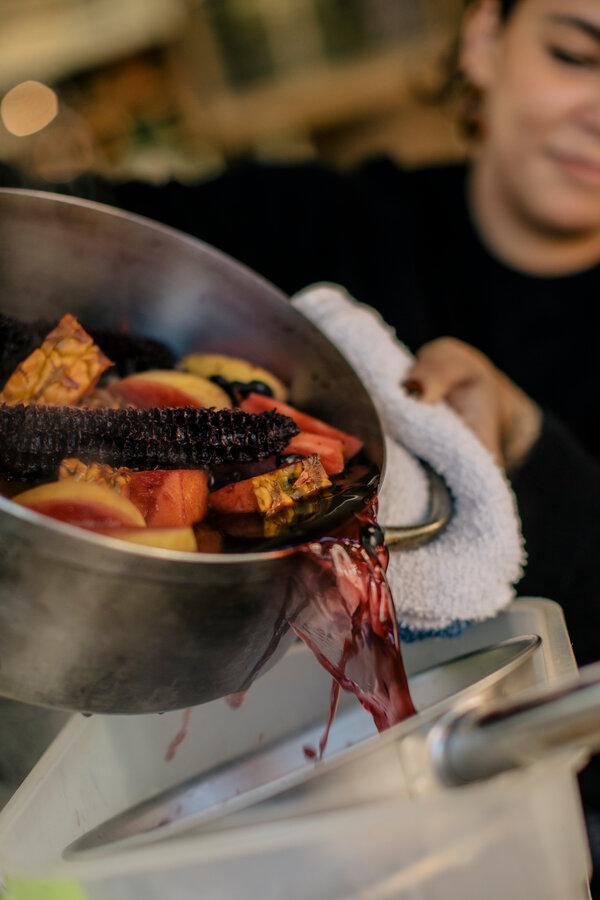 “There are people that love it because we say it’s a natural Peruvian juice,” Victor Rojas, the chef and owner of Inti in Hell’s Kitchen, said in Spanish. Mr. Rojas started serving the drink when he opened the restaurant in 2012. He now makes 20 liters a week, using a recipe his parents taught him at home in Huánuco.

Recently, chefs have used the chicha morada as a base in alcoholic drinks, often used in a version of pisco sours, a type of Peruvian cocktail.

Chicha morada and mazamorra morada are staples of a Peruvian festival celebrating the Señor de los Milagros, the Lord of Miracles, held throughout October. The beverage has also become more commercialized with candies and drink powders.

Mr. Chavez makes 40 liters of chicha morada at least twice a week. It’s become the restaurant’s most popular drink and is also a staple ingredient in his pisco sour.

“This is ours,” Mr. Chavez said. It’s a drink he says that every Peruvian shares proudly, eager to see someone’s delight when they try it for the first time.