A mischievous macaque allegedly snatched a man’s phone and filled up his camera roll with photos and videos last week, before ditching the phone for him to find outside his home in Malaysia.

Muhammad Zackrydz bin Mohd Rodzi shared some of the monkey’s handiwork on Twitter, including a video of the animal inspecting his phone with its mouth.

Rodzi says the long-tailed macaque must have taken the phone from his bedside while he was sleeping because he woke up to find it missing over the weekend.

“There’s no sign of robbery or something because everything is fine and my family have seen nothing,” Rodzi told Storyful. “The only thing in my mind was maybe it’s some kind of sorcery or something.”

Rodzi didn’t find the phone on the first day, but on Day 2 his father reported seeing a monkey playing in the jungle around the family’s home.

Rodzi says he initially considered the monkey to be an unlikely suspect. “What are the odds, right?” he told Storyful. “I was sleeping on the second floor of my house, and my house was entirely locked at that time.”

Nevertheless, Rodzi decided to check for his phone in the jungle around his house. His brother called the phone and Rodzi followed the sound to track it down.

He found the phone in fairly good condition, though the screen protector was peeled back and there was a bit of mud on it.

Rodzi says his uncle cracked a joke shortly after the phone was recovered.

“The monkey left a selfie,” he told Rodzi. 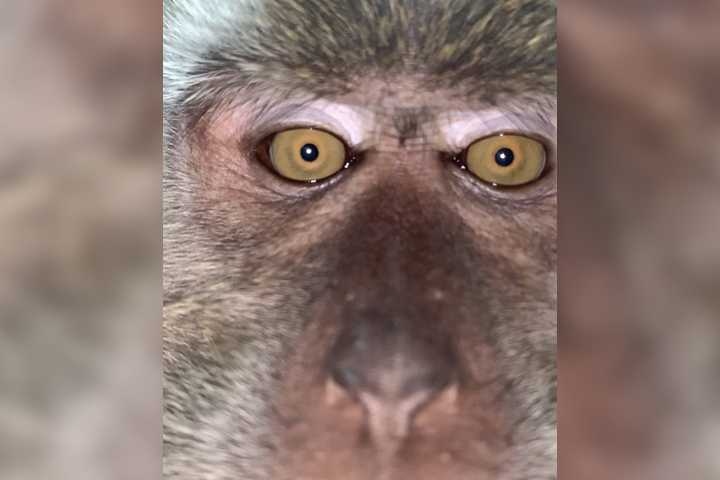 “I opened my gallery and boom! A gallery full of monkey photos,” Rodzi said. “There are photos, slow-mos, time-lapse, portrait — everything.”

Rodzi posted proof of the macaque’s antics on Twitter, where dozens of images can be seen in his photo gallery.

The photos show the macaque inspecting the phone from a perch in the jungle treetops. Videos show the animal poking and prodding at the phone, then trying to take a bite of it. The videos include several shots from inside the monkey’s mouth.

It’s not the first time a monkey has caused trouble with selfie. A Sulawesi crested macaque named Naruto famously took a selfie using a camera left in the Indonesian rainforest in 2011.

Naruto’s selfie went viral and triggered a years-long legal battle over who deserved credit for the photo — the photographer who left the camera, or the monkey itself?

The photographer and PETA, which represented the monkey, ultimately settled the suit.

PETA has not signalled any plans to fight Rodzi for this macaque’s selfie rights — yet.