Joy Baking Group has cornered much of the market with one guiding principle: When it comes to cones, people want what they know.

Joy Baking Group supplies cones for a multitude of ice cream shops and stores in North America.Credit…Jennifer Chase for The New York Times

HERMITAGE, Pa. — The ice cream cone is never the star of the show.

Its role is clear: Keep the scoop upright, don’t leak and don’t upstage the main player.

But being that supportive takes work. Which is why David George believes that the cone deserves more respect.

“When you have a car, you know a whole lot of engineering is going into it,” he said, standing beside bright-red boxes of cones. “A simple cone sounds like a simple thing, but it is not so simple.”

As the realm of ice cream has expanded — with more flavors, toppings and faddish treats introduced each year — the cone world has only grown smaller. Joy has cornered the cone market by betting on a basic premise: When it comes to the cone, people don’t want creativity. They want familiarity. 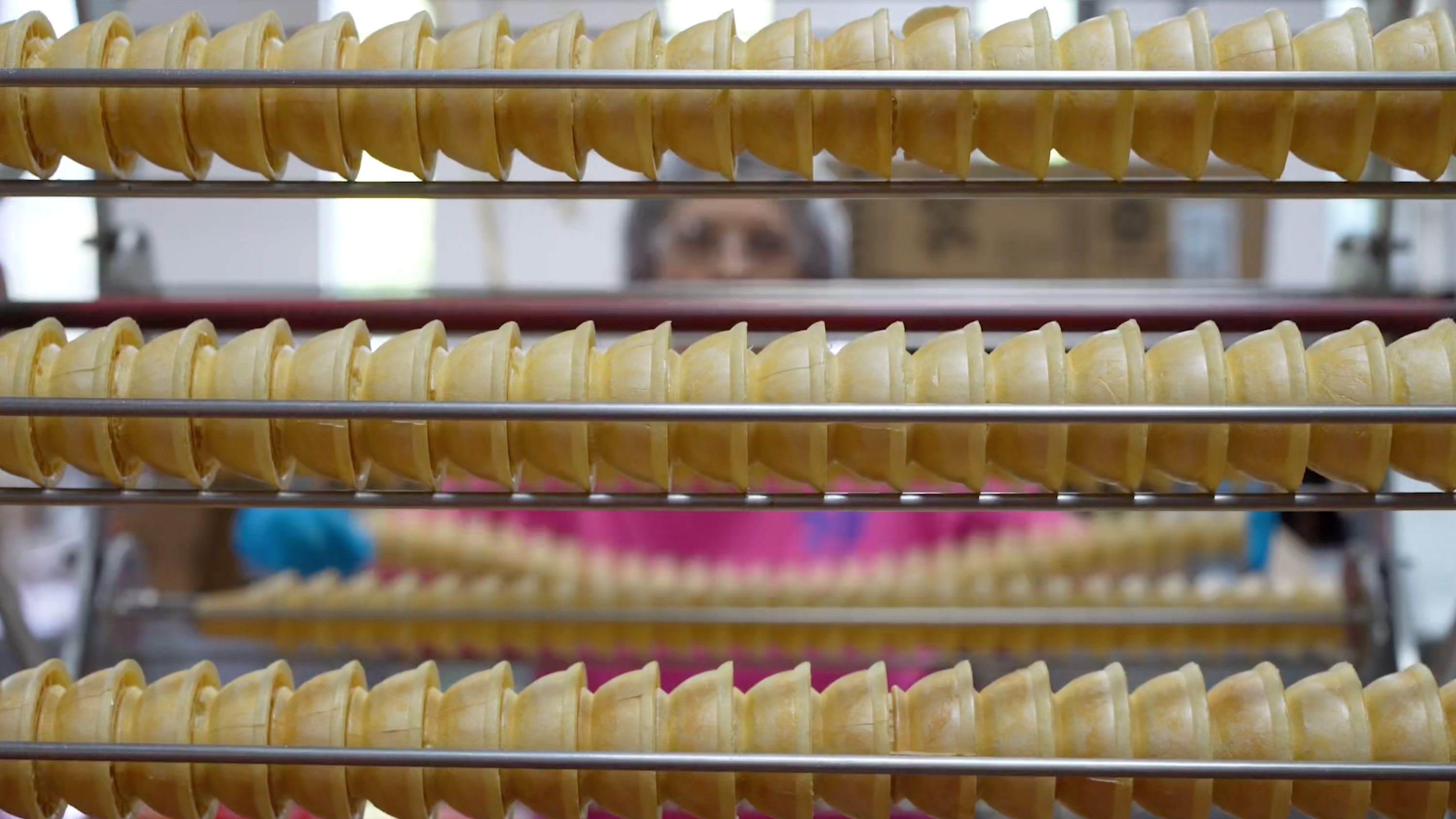 Inside Joy’s 530,000-square-foot flagship factory in western Pennsylvania — one of four Joy cone facilities in North America — jumbo spinning ovens that look like a joint partnership between NASA and Dr. Seuss operate around the clock, producing 15 to 20 million cones a day during its busiest season, from February through July. They include crisp, squeaky cake cones; sturdier, cookie-like sugar cones; and wide-mouthed, caramel-scented waffle cones.

These are cones designed to taste like childhood summers. They’re as comforting as a slice of pie, as delightful as cotton candy.

Joy’s ascendance has come from attracting customers of bygone cone companies or acquiring competitors. In March, Joy bought Novelty Cone, the supplier of Mister Softee trucks for over 50 years. 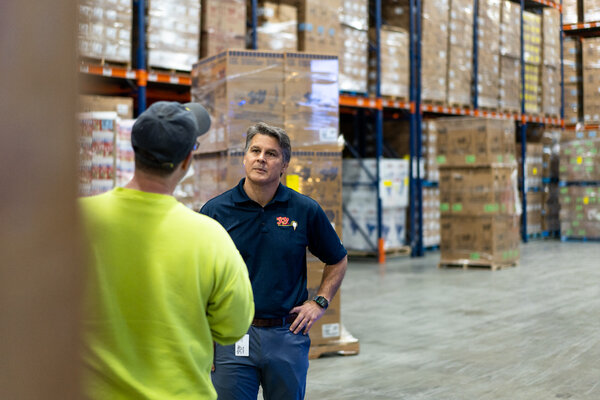 They couldn’t make cones fast enough, and customers craved what they knew. So they added Joy cones. (Mr. Smith and Ms. Cuscuna, who no longer own Ample Hills, serve both homemade and Joy cones at the Social, their new shop in Prospect Heights.)

“If they were not making a decent product, I would be kicking and screaming a little more,” Mr. Smith said. Besides, he added, “I think for most of us, the cone is an afterthought.”

Not at Joy’s Pennsylvania factory, where cone-making is a highly technical, obsessed-over process.

Huge, keg-like vats hold the pale batter for the cones — mainly flour, water and sugar, along with tapioca flour for the cake cones. Joy uses brown sugar in its waffle and sugar cones, as Mr. George said this makes them sturdier and sweeter.

A maze of pipes carry the batter into another room, where it is squirted onto cast-iron molds that rotate inside ovens at 350 to 400 degrees for anywhere from 90 to 110 seconds, depending on the cone size and type. For sugar and waffle cones, another machine plucks the cones off the molds and slides them into spinners to be rolled. A floor worker inspects each cone for imperfections: cracks, bumps, uneven coloring. 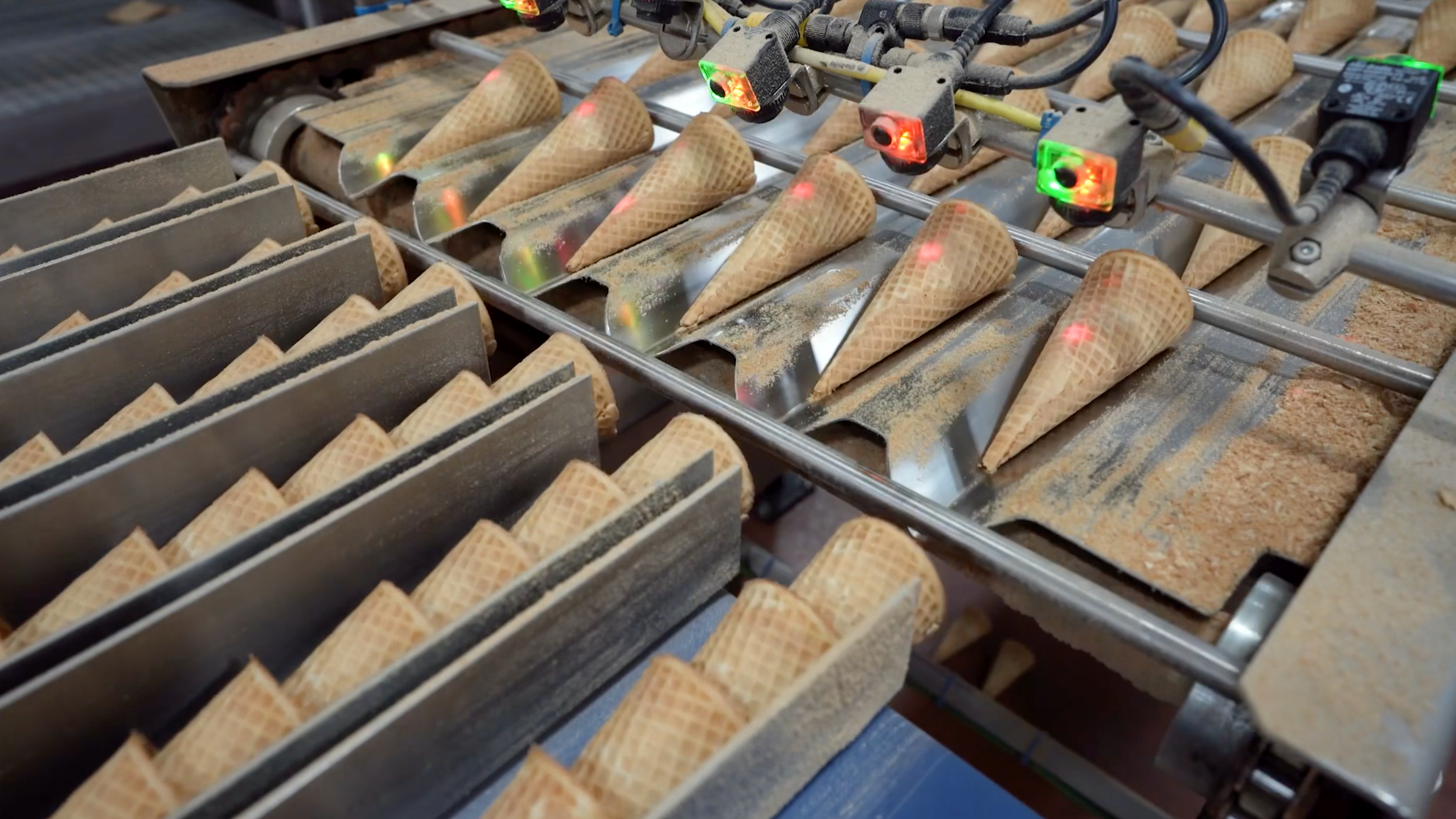 “It’s already a niche business,” Mr. George said. “So it is not like we come out with new flavors all the time, because then you are talking about a niche of a niche.”

Where Joy has innovated is in its technology: a robotic arm that gently moves cones from the oven to a conveyor belt to be packaged, or a machine that snugly wraps and seals the cones. Engineers have tweaked the cone design, too, moving up the grid pattern at the bottom of the cake cone to strengthen it. Most of the cones are extremely delicate, and piles of broken ones lie beside some machines.

Joy wasn’t always a juggernaut. Two Lebanese immigrants — Albert George, Mr. George’s grandfather, and a brother-in-law, Thomas J. Thomas — founded the company in 1918 in Brookfield, Ohio. It nearly went bankrupt in 1964 after a fire broke out in the factory. Mr. George’s father, Joe George, took over that year, and focused on building proprietary ovens and selling cones in stores. Within five years, the company was profitable.

Over time, smaller cone makers have struggled to keep up with the rising costs of operating. In the past few decades, many have closed or been acquired by Joy.

“The last thing I wanted to do was shut my company down or sell it to Joy,” said Ron Marinucci, who sold his company, Novelty Cone, to Joy in March. But he was in his late 60s and no one else was willing to take over.

“They make an extremely good product,” he said of Joy. But the problem with one or two companies’ dominating the business, he added, is that they can control prices.

Mr. George said Joy’s prices have risen by only a few cents per cone over the last 10 years, roughly tracking inflation. Cones are an inexpensive luxury, he said. “We want to make sure that is always the case.”

Ice cream shops are banking on that. Several owners said they favored Joy primarily for their reliability and cost.

“Joy cones are refreshing in their normalness and not-flashiness,” said Victoria Lai, the founder of Ice Cream Jubilee, a string of shops in the Washington, D.C., area that serve the company’s sugar cones. As supply-chain challenges make it harder to find ingredients, she said, Joy cones are consistently available.

But Kristine Tonkonow, the founder of the Konery, a cone maker in Brooklyn, thinks ice cream lovers deserve more options. “Imagine if Coca-Cola was the only company that made soda,” she said. “It really is the way that the waffle cone industry is.”

When she started the business in 2014, she looked at a Joy cone. “I thought it could be better. It could be more delicious, it could be prettier,” she said.

The cone should be as exciting as the ice cream, she believes. Hers come in bright colors and flavors like orange Creamsicle and salted blue corn. They cost three to four times more than Joy’s, Ms. Tonkonow said. But she has a wide array of customers, including Whole Foods Market, theme parks and independent shops like Malai Ice Cream in Cobble Hill, Brooklyn.

“I don’t think we could overtake Joy,” Ms. Tonkonow said. “But we would like to give them a run for their money.”

Tiffany Parris, a customer at the Social on a recent Sunday, said she was interested in choosing a flavored cone, but only if she could sample it first. Otherwise, “it is too risky,” she said, calling the Joy sugar cone she was eating “a classic.”

Susan Soorenko, the owner of Moorenko’s, an ice cream shop in the Washington area, said the Konery’s products were expensive and would complicate the ordering process. “There is no way I am offering that array of choices,” she said. “It is a recipe for chaos.”

She uses Joy cones, but doesn’t feel loyal to them. She finds the flavor of the sugar cones too intense. “If a local company came to me, or even a not local company, and said, ‘We can go toe to toe with Joy,’” she said, “I would absolutely give it a try.”

But she doubts that will happen.

“The thing about ice cream is that for virtually everyone, it is so tied to nostalgia,” she said. “It is what you remember about your grandma taking you out.” For many Americans, those moments are linked to Joy cones.

Even if another worthy competitor arises, “it doesn’t matter,” she said. “Because it is competing with a memory.”