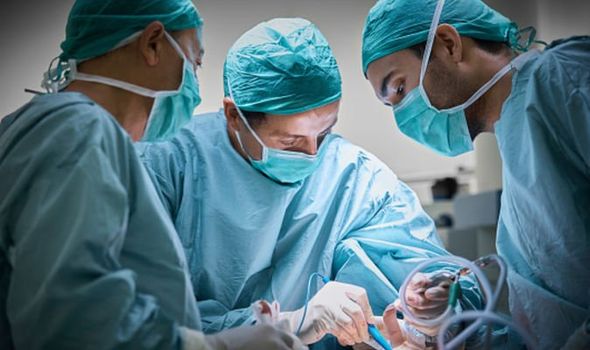 Doctors in the United States confirmed that the surgery offered to the woman in her 20s was her only chance of survival after spending six weeks on a life support machine. Her lungs were so badly damaged by the disease they had to carry out the operation. Dr Ankit Bharat, of Northwestern Memorial Hospital in Chicago where the procedure was carried out, claimed the transplant could be life-saving for some Covid-19 victims, but was “not for every patient”.

He said: “We are talking about patients who are relatively young, very functional, with permanent lung damage who can’t get off the ventilator.

“A lung transplant was [the woman’s] only chance for survival.”

He indicated that she had no serious underlying medical conditions, but was still recovering after 10 hours of surgery.The procedure took several hours longer than expected as a result of inflammation in the lungs.

But the woman remains on a ventilator as the virus has left her chest muscles too weak to breathe independently.

As she recovered, the doctor said: “She’s awake, she’s smiling, she FaceTimed with her family.”

Meanwhile, surgeons in Austria said a 45-year-old whose lungs were “damaged beyond repair” became the first European to survive the procedure after the virus led her to develop severe respiratory failure.

Walter Kleptko, who leads the Medical University of Vienna’s department of surgery, explained that the woman had survived “an otherwise hopeless situation”.

An 18-year-old sufferer also underwent the procedure in Italy. She had spent a total of 58 days on a life-support machine before having a successful double-lung transplant.