At least two people have been killed after a “medicane” – a rare Mediterranean hurricane – toppled trees, cut power and flooded streets in Greece.

Storm Ianos hit the Ionian islands and the western Peloponnese on Friday before lashing the centre of the country on Saturday.

Greece’s weather agency warned of damage and threat to life as it issued alerts for many areas.

An elderly woman was found dead in a flooded house in Farsala and the body of 63-year-old man was discovered near a hospital in Karditsa.

Areas of Karditsa, one of Greece’s biggest plains – around 125 miles (200km) north of Athens, were swamped with water and a bridge collapsed. The fire service said it had received more than 2,450 calls since the storm began – to rescue people, cut down trees and pump water from houses and businesses.

Five boats also sank off the holiday islands of Zakynthos (also known as Zante) and Lefkada on Friday, said the coastguard.

Greece’s civil protection agency declared a state of emergency on Kefalonia, Ithaca and Zakynthos as power was cut in many areas.

Kefalonia’s mayor, Theofilos Michalatos, said no one was hurt but that homes, roads and water facilities had been damaged.

The storm reached the Athens area on Saturday but there have so far been no reports of damage. Trains between the capital and the second city of Thessaloniki were suspended. 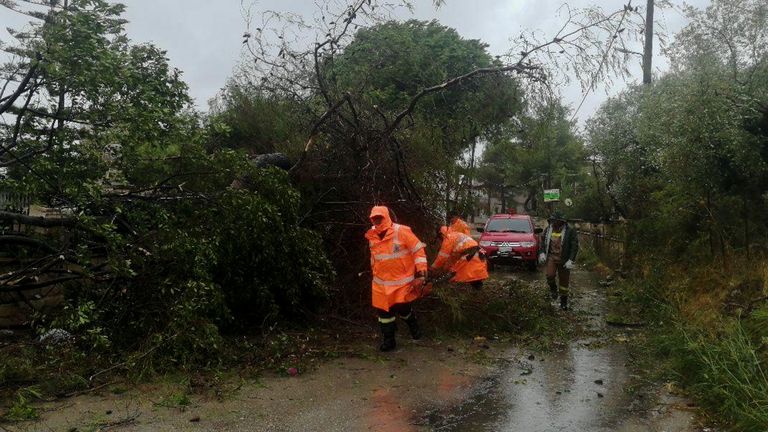 A medicane is a hybrid phenomenon with “some characteristics of a tropical cyclone and others of a mid-latitude storm”, according to the UN’s World Meteorological Organization.

They have strong winds spinning around a central core and torrential rain, but are smaller in diameter than hurricanes and don’t last as long – typically 24 to 48 hours.

Such storms first appeared in Greece in 1995 and, while far less common than hurricanes, have become more frequent in recent years.