The world was paying little attention on May 24, 1976, when a small wine tasting was held in Paris at the Intercontinental Hotel. But the echoes of that tasting, later called the Judgment of Paris, have resounded for decades.

The instigator, Steven Spurrier, an Englishman who owned a wine shop and wine school in Paris, had set up a blind tasting of 20 wines — 10 white and 10 red — for nine French judges, including some of the top names in the French wine and food establishment.

It was hardly thought to be a fair fight. As has been recounted countless times, the judges were thoroughly convinced that California wines were inferior.

“Ah, back to France,” one judge sighed after tasting a Napa Valley chardonnay. Another, sniffing a Bâtard-Montrachet, declared: “This is definitely California. It has no nose.”

When all was done, a shocking consensus revealed the favorite wines to be a 1973 chardonnay from Chateau Montelena and a 1973 cabernet sauvignon from Stag’s Leap Cellars, both in Napa Valley.

The Americans celebrated, the French shrank in consternation, and everlasting fame awaited Mr. Spurrier, who went on to a long career as a wine entrepreneur. 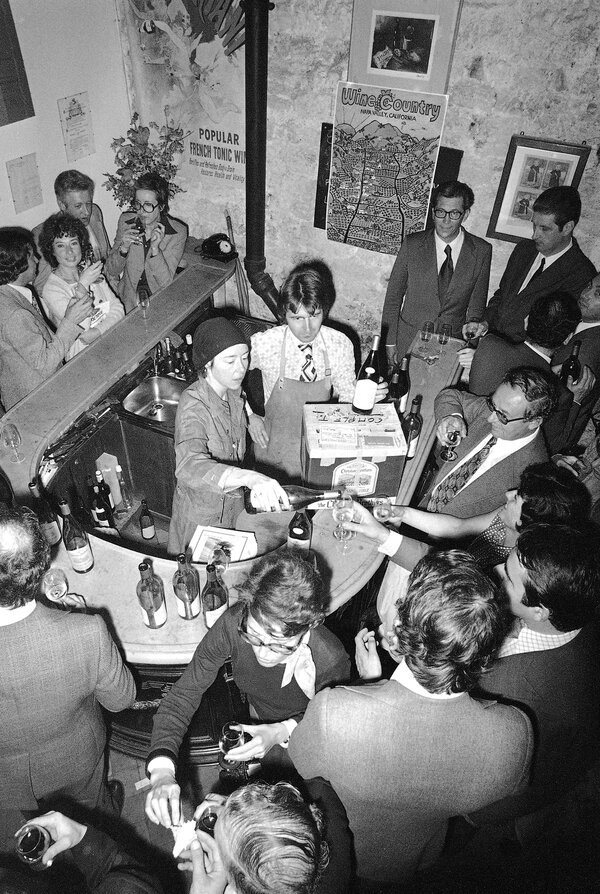 Mr. Spurrier died on March 9 at his home in the village of Litton Cheney in Dorset, England. He was 79. The cause was cancer, said Simon McMurtrie, chairman and publisher of the Académie du Vin Library, a wine imprint founded by Mr. Spurrier.

The Paris tasting might have swiftly been forgotten had not a single reporter, George M. Taber of Time magazine, been on hand to witness the events. His article, “Judgment of Paris,” gave the California wine industry a much-needed boost, lending its vintners international credibility at a time when they were searching for critical approval and public acceptance. Marketers used the tasting to sell California wines all over the world.

“It rocketed us to fame,” said Bo Barrett, whose father, Jim Barrett, was the proprietor of Chateau Montelena.

Warren Winiarski, the founder of Stag’s Leap Wine Cellars, said in 1983: “The phone started to ring pretty quickly. The wines really took off.”

Mr. Taber, the reporter, in 2005 published a book, “Judgment of Paris: California vs. France and the Historic 1976 Paris Tasting That Revolutionized Wine.” A 2008 film, “Bottle Shock,” with Alan Rickman playing Mr. Spurrier, depicted the tasting as the climax of a triumph-of-the-underdog story.

Most recently, Jason Wise, the director of the “Somm” series, a trilogy of documentaries about sommeliers, made a documentary about the 1976 tasting, “The Judgment of Paris,” which is to be released this summer.

As for Mr. Spurrier, he leveraged the tasting into different careers in wine, with both triumphs and failures.

With the shop Caves de la Madeleine and the school L’Académie du Vin as a base, he built a successful mini-empire in and around Paris. By 1980 he had opened two wine bars, Bistrot à Vin and the Blue Fox, as well as a restaurant, Moulin du Village.

Other schemes did not work out. A plan for a wholesale wine storage cellar was an expensive mistake, and while efforts to open distant outposts of L’Académie du Vins succeeded at first, they did not end well.

In France, tax problems ensued. As Mr. Spurrier put it in “Steven Spurrier: Wine — A Way of Life,” a memoir published in 2018, “The Spurrier House of Cards was to collapse in 1988.”

Moving back to London in 1990 with his wife, Bella, and their two children, Mr. Spurrier sought to revive his career. He was an indefatigable traveler, giving talks on wine, and advised airlines on what to serve passengers. He wrote a series of educational wine books and, in 1993, began a long association with Decanter, a British consumer magazine, writing columns and leading tastings.

Steven Spurrier was born on Oct. 5, 1941, in Cambridge, England. His father, a tank officer during the war, joined his family’s sand-and-gravel business in Derbyshire afterward, which boomed with postwar construction.

Steven attended Rugby, a boarding school, and the London School of Economics. He was an indifferent student, more interested in pursuing art, jazz and wine.

His early impression of wine was formed as a 13-year-old, when his grandfather offered him a taste of port at a family Christmas Eve dinner — Cockburn’s 2008, Mr. Spurrier recalled. “There was never any doubt in my mind that I would make wine my career,” he wrote.

He landed his first job in 1964 at Christopher’s, a leading London wine firm. That year, at a Bayswater skating rink, he met Bella Lawson, whom he married in 1968. She survives him, as do their children, Christian and Kate, and four grandchildren.

The family gravel business was sold in 1964, and the substantial check Mr. Spurrier received for his shares — the equivalent of roughly $7 million today — was to finance adventures and business opportunities for years.

As part of his wine education, Mr. Spurrier was sent on trips to what were then considered the great wine regions — mostly French, but also the Rhine, the sherry region of Spain and Portugal’s port lodges.

With his new wealth accruing to him at a time of perilously high British tax rates, the Spurriers decided to decamp for Provence in 1968 and then to Paris in 1970. There, expecting their first child, they found an apartment on the Rue des Martyrs in the fashionable 9th arrondissement, on the right bank.

While walking the streets one day, Mr. Spurrier passed a small wine shop, Caves de la Madeleine, in the Cité Berryer, an 18th-century shopping arcade. He soon purchased the shop and set about making it his own.

It might have seemed rash for an Englishman to presume to sell wine to the French, but Mr. Spurrier made a go of it. Soon, with two partners, Jon Winroth, a wine writer for The International Herald Tribune, and Patricia Gallagher, a wine-loving American expat, he opened L’Académie du Vin in an adjoining building.

“There is a myth about Frenchmen, that they know all about wine simply because they grew up drinking it,” Mr. Spurrier told The Times in 1977. “In fact, most Frenchmen don’t know anything about wine. They don’t really care. They care about food. They can talk for hours about the nuance of a sauce, but wine is really just something to clear the palate for the next food taste. So we’re trying to change that a bit.”

Whether selling wine or simply drinking it, Mr. Spurrier was a debonair figure, hair perfectly coifed, a handkerchief peeking out just so from his jacket pocket. In his later years he became an elder statesman to wine writers.

He had one last adventure in wine to come. In 1987, the Spurriers bought a farm in Dorset near the south coast of England, and he decided that the chalk soil, similar to what can be found in Champagne and Chablis, was a perfect place for vines.

They did not start planting until 2009, by which time a burgeoning sparkling wine industry had taken root in southern England. Their sparkling wine, Bride Valley, had its first release in 2014.

While wine had been Mr. Spurrier’s professional life, art was his passion. He built a sculpture garden in Dorset and filled his home with his favorite pieces.

“Wine is a way of life, but art is the real thing,” he said in an interview with Club Oenologique, an online wine magazine. “Art means more to me emotionally than wine — there’s no contest.”