Palestinian officials call Israeli-Bahraini normalisation deal ‘another treacherous stab to the Palestinian cause’. 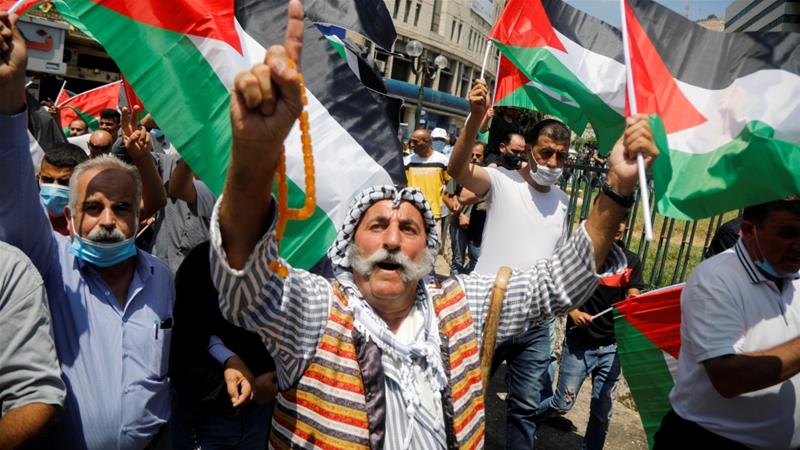 Palestinian officials have condemned the Israel-Bahrain normalisation deal announced by US President Donald Trump as another “stab in the back” by an Arab state.

Friday’s accord normalising diplomatic ties between Israel and Bahrain comes one month after the United Arab Emirates agreed to normalise ties with Israel under a US-brokered deal.

Following the announcement at the White House, Palestine recalled its ambassador to Bahrain for consultations, according to its foreign ministry.

In the besieged Gaza Strip, Hamas spokesman Hazem Qassem said Bahrain’s decision to normalise relations with Israel “represents a grave harm to the Palestinian cause, and it supports the occupation”.

The Palestine Liberation Organization (PLO), based in Ramallah, occupied West Bank, called the normalisation “another treacherous stab to the Palestinian cause”.

Palestinians fear the moves by the UAE and Bahrain will weaken a long-standing pan-Arab position that calls for Israeli withdrawal from occupied territory and acceptance of Palestinian statehood in return for normal relations with Arab countries.

“By normalising ties with the occupation, Bahrain is breaking all Arab resolutions. It is rejected and condemned and it represents a betrayal of the Palestinian cause,” Wassel Abu Youssef, a senior PLO official, said.

Reporting from Ramallah, Al Jazeera’s Nida Ibrahim said the PLO’s statement called the accord “a betrayal to the Palestinian cause, as if they’re legitimising the Israeli plans – what the statement calls ‘the Israeli crimes on the ground'”.

“We spoke to a Palestinian official close to President Abbas [of the PA] and he said that peace between the Arabs and Israel will not happen without the Palestinian issue being resolved,” Ibrahim said.

“He also said that he doesn’t think that this would have happened – the UAE and Bahrain, signing deals with Israel to normalise relations – without regional backing.”

The US-brokered deal between Israel and the UAE is scheduled to be signed at a White House ceremony hosted by President Trump on September 15.