Team GB’s medal haul in skateboarding and BMX has brought more accessible, urban sports to the forefront of the Olympics.

BMX has been incredibly popular with audiences, with Team GB winning two golds and a silver – the team’s first medals in the sport.

And Shauna Coxsey impressed the world with her deft moves in sport climbing as it made its debut.

Skateboarding, BMX, sport climbing and surfing have been added as part of a drive to make the Games more inclusive, with International Olympic Committee (IOC) president Thomas Bach wanting them to be “more gender-balanced, more youthful and more urban”.

Breaking (or breakdancing) will make its first appearance at the Paris Olympics in three years’ time.

All five sports are very different to the traditional Olympic disciplines, with the street, urban landscape or the surf influencing them – and entire cultures surrounding each of them.

Dr Jamie Kenyon, senior lecturer in sport management at Loughborough University, said introducing these types of sports was essential for the Olympics “to remain relevant”.

He told Sky News: “It’s become even more important in the past 18 months with COVID, there’s a real concern we’ll see a generation who are lost to organised sport.

“There’s been a reduction in places and opportunities to play, and organisations are not financially viable due to the pandemic and austerity before that.

“Each of these sports comes with its own cult following, which the Olympics sees as a gateway. What happens after Tokyo will be a great test of the success, or otherwise, of this strategy.”

Californian surfers in the late 40s or early 50s (the exact date is unknown) started using wooden boards with roller skate wheels on during their downtime.

The boards have evolved somewhat since then and the sport has gone through its ups and downs – the downs mainly due to safety concerns for both skaters and members of the public, and damage to public infrastructure.

Now, it is common to see skate parks in cities and towns around the world, and the likes of Tony Hawk have made skateboarding the norm after the legendary skateboarder’s eponymous video game enthralled children and adults the world over in the early 2000s.

Hawk, now 53, is one of Sky Brown’s many fans and said she could be “one of the best, well-rounded skaters ever, regardless of gender”.

Brown’s Instagram post ahead of her medal-winning performance summed up the essence of the sport: “Today I’m excited to show the world how beautiful and creative skateboarding really is.

“I’m excited for people to see how much FUN it is.”

As with the other new Olympic sports, skateboarding is not just a sport but a culture, with many films and video games made about it and a group spirit that makes it inclusive.

The YouTube generation has also kept the sport innovative as skateboarders record and edit videos of themselves and friends performing new tricks – just as Brown does.

Although this is BMX’s fourth Olympics showing, it is relatively new and this year Team GB has captured people’s imagination with impressive tricks and bikes flying through the air.

BMX (bicycle motocross) also has its roots in California, where children began racing their bicycles on dirt tracks, inspired by motocross in the 70s. 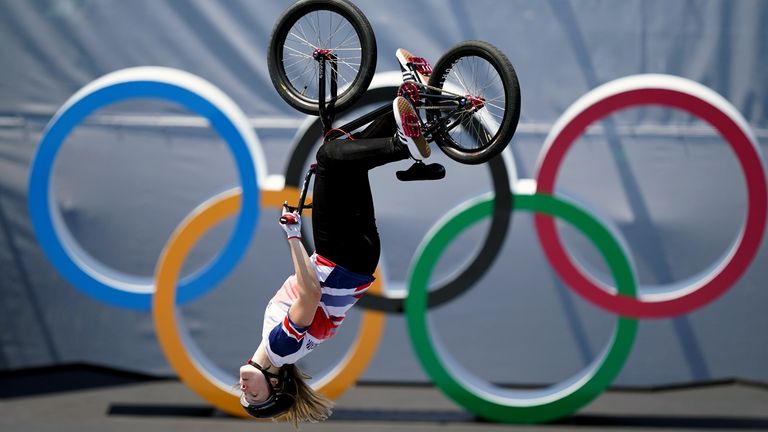 In 1982/83 the small wheelies bikes used in BMX became the “must-have” bicycle for British children and teenagers, and the sport exploded.

BMX is intrinsically linked to the street as riders who did not live near a BMX track – most people in the UK – were able to use pavement bumps, stairs and concrete slopes to launch off for decades – as well as skateparks.

Red Bull and shoe brand Vans have been integral to BMX’s popularity and, in turn, the culture and competition. Social media has also boosted that.

Despite its popularity, Beth Shriever and Charlotte Worthington both told how they had to work, and crowdfund in Shriever’s case, to be able to travel to Olympic qualifying competitions as Team GB BMX women had their funding taken away after Rio. Kye Whyte is the youngest of three boys who are all BMX riders, with his father revealing it took 10 years to get funding for a track in Peckham, south London, where they are from.

Whyte, 21, said: “In BMX there’s a lot of black kids coming up who are doing well. I feel like people are realising BMX is for everyone.

“Those kids see it as an opportunity to not be in trouble, to not roam the streets doing silliness, they can just be riding a bike and having fun.”

Hawaiian Duke Kahanamoku was perhaps the first person of note to say they wanted surfing included in the games, doing so while accepting his Olympics swimming gold medal in 1912.

Surfing has been around for centuries and was central to ancient Polynesian culture, while in Hawaii it was part of religion before becoming a sport there in the early 20th Century.

Professional surfing took off in California in 1959, which is when it became a national pastime and films and surf music, such as that from the Beach Boys, followed.

This made it into not just a sport but also an art form, while surf brands such as Quiksilver, Body Glove and Roxy were widely popular in the 1980s, ’90s and early 2000s. 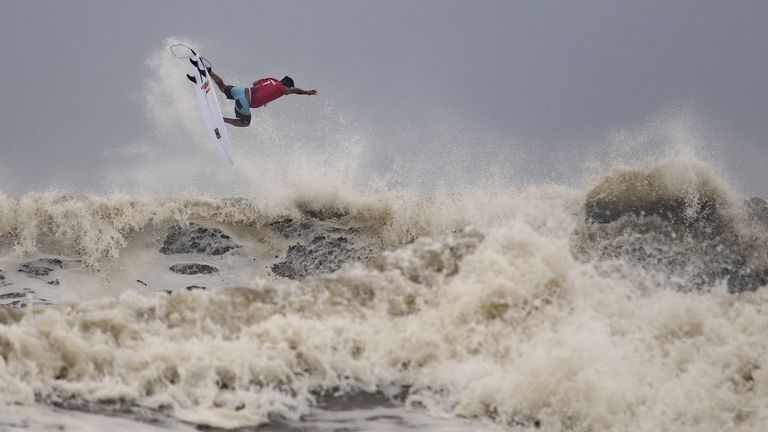 One of surfing’s biggest cultural influences is boardshorts, garments worn by men around the world.

Surfing and its culture have also been ingrained in parts of Australia, South Africa and Brazil – where some of the biggest names in the sport come from.

World number two Italo Ferreira, from Brazil, took gold in the men’s finals in Tokyo, while the USA’s Carissa Moore took gold for the women.

Mountain climbing is out of reach for most people but climbing walls have become commonplace in urban gyms around the world since a University of Leeds PE lecturer stuck pieces of rock into a corridor wall in 1964.

Not just the attraction of children’s parties (although that is where many begin), with just a pair of shoes needed, indoor climbing has become an increasingly popular sport over the past 15 years.

The IOC worked on getting it included as an Olympic sport for more than 10 years and it became the top trending Olympic sport on Google search when athletes made their debut this week. Sport climbing at the Olympics involves speed climbing (getting to 15m the fastest with ropes), bouldering (scaling the most fixed routes on a low wall in a certain time without ropes) and lead (trying to get the highest on a more than 15m wall with ropes within six minutes).

Shauna Coxsey, from Runcorn, Cheshire, was Team GB’s only climber and after starting aged five, she quickly became one of the country’s most successful competitive climbers, winning every British Bouldering Championships and taking home golds at the 2016 and 2017 IFSC Climbing World Cups.

The 28-year-old failed to reach the final in this year’s Games, admitting she was “not in the shape I wanted to be” after having knee surgery in mid-2020 – and revealing afterwards she had torn her meniscus a few days before.

Speaking before the Games, she told Sky News: “What would be incredible is to see more athletes coming through, and we already are. I’ve always been passionate about helping people and about promoting our sport, so I think there’s a lot of excitement to come within the sport.”

Also known as breakdancing, the discipline is both a sport and an art form, with competitors using the break in a song to perform moves such as head spinning, that involve considerable skill and strength.

It was created in the early ’70s in New York partly as a peaceful way for rival street gangs to settle disputes, but also as an escape and a way to claim their identity, so its roots are truly urban.

But it has changed since then, and although most people will be familiar with breaking in the background of some music videos, the competitive side is quite different. 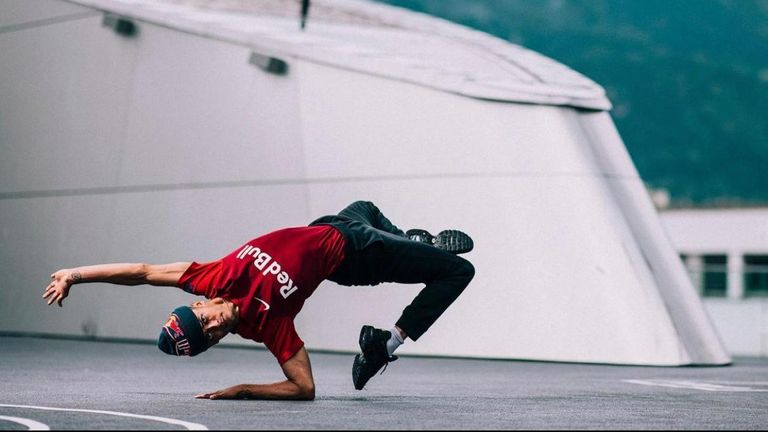 Breaking competitions are normally quite subjective, but the Olympics will have more specific boxes to tick, although it will be far from as regimented as something like gymnastics.

Paris 2024 Team GB hopeful Sunni Brummitt believes breaking, which will have live DJs, will be popular with audiences around the world, particularly younger people – which is exactly what the IOC wants.

The 26-year-old, who lives in Bristol, started breaking lessons aged 10 and has competed multiple times at the Red Bull BC One World Finals, breaking’s most prestigious competition.

One of Team GB’s leading hopes, he told Sky News: “The Olympics is the beacon for us to show our physical and athletic potential.

“It’s an amazing opportunity for us, it’s the first time we’ll be on a platform that’s respected globally and visible to the public.

“A lot of sports, you have to have a bit of a budget to get into but you don’t need anything for breaking so it’s very accessible.

“It’s a dance form but has a lot of influence from gymnastics, salsa, capoeira.” 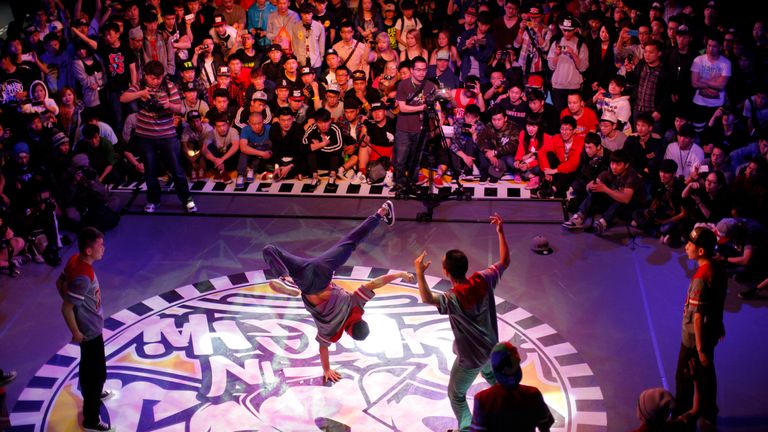 Brummitt is one of the few British breakers able to train and compete full-time as he is sponsored by Red Bull, but he hopes the Olympics will mean more people can make a career of it and get sponsorship, and therefore more competition.

“Hopefully it’s going to give some legitimacy to the art form, and kids wanting to do it will have more validity,” he added.

“It’s the first time my grandma will be able to relate to what I do.”