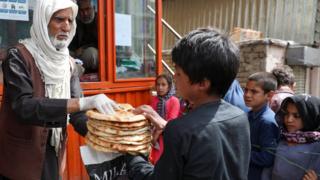 At least six people were killed when protesters angry at the distribution of food aid clashed with security forces in western Afghanistan, officials say.

The violence began after demonstrators gathered in Firozkoh, the capital of Ghor province, to complain about the perceived failure to help the poor during the coronavirus pandemic.

Local volunteer radio presenter Ahmadkhan Nawid was among those killed, according to the Afghanistan Journalists’ Centre.

The human rights group Amnesty International called for an independent and effective investigation into what it said was the “use of unnecessary and excessive force” that led to the killing of the civilians.

Vice-President Amrullah Saleh wrote on Facebook that the incident was “shocking” and announced that the government was “seriously investigating” it.

He also assured Afghans that no-one would miss out on the food aid being distributed to help those plunged further into poverty as a result of the restrictions imposed to prevent the spread of Covid-19.

“We will reach in support every single inhabitant of this country who has been affected economically by the coronavirus,” he added.

The chairwoman of the Afghanistan Independent Human Rights Commission told Reuters news agency that in the past week it had received complaints that food aid was being distributed unfairly.

“We hear repeated complaints from people that the ones who are receiving the limited aid that is there are not the ones that are most deserving, they are the ones who have connections to local authorities or local officials,” Shaharzad Akbar said.